I started by making it up as an object that overrides the EA version. That works fine as long as it includes all the files in the package, and the package is in the game folder, and the recolours are created from the override version. (See the recolours included in the download).

However 2 things are a problem with this -
1. If I delete all the non-changed files in the package the game reverts to the original barstool.
2. The override object picks up all the frames from the original EA object, but not the seats, and includes 1 blue selection. I am assuming that this is because the subset 'fabric' doesn't exist in the original object, and the family in the MMAT has been changed as per Ignorant Bliss' instructions in Step 6.

Following the tutorial, I created the extra sub-set and called it 'fabric'
I did do the fix integrity for both the TXMT and the MMAT - but removed the ##0x1C050000! that it added, as it's meant to be a CEP, so not a separate object. <- Was this right?

So while I was thinking about all of this I realised that when the mesh name isn't the same as in the original package, there's problems with finding things. However, I don't think a package that has 2 mesh names that are the same works either? And when I tested this theory out - it only has 1 subset in the recolouring (using open). 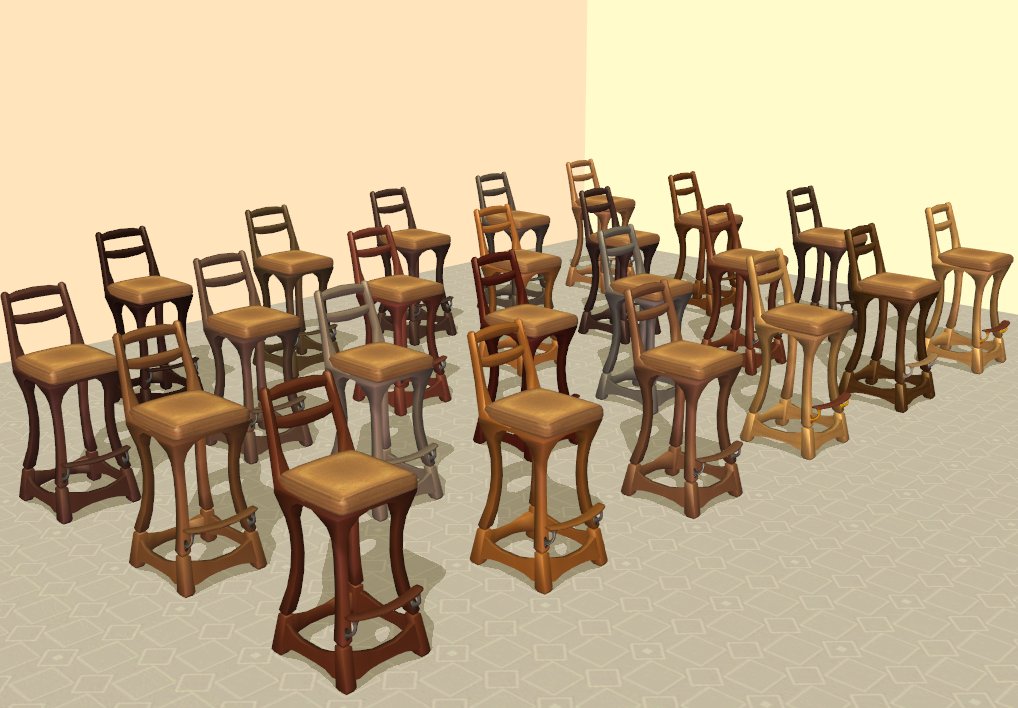 I was making this for my blind date - and while the original chair isn't a cep, it does work... kind of. But I'd like to make it really work.

Hoping that someone can point out something obvious that I've missed.
Simthing for everyone

"No Boom Today. Boom Tomorrow. Always Boom Tomorrow" - Ivanova (B5)
Having trouble with the Graphics card and Sims2? Feel free to pm me here, or in this forum at Leefish Sims 2 Graphic Cards
Advertisement
Nysha

Which tutorial are you following?

I'm not sure this is how you're supposed to do it, but I once created a CEP-Extra by accident. I was following the adding a subset tutorial (this might be the one you're using?), and extracted all the resources I'd need from the game files using finder, imported them into a new .package, and followed the tutorial steps. If this is what you did (or are thinking of doing), I wouldn't fix integrity, since you only have half of the resources in your file so you'd be fixing integrity on half an object - not likely to work

. The disadvantage of my accidental method is that I didn't know (or figure out) which bits are supposed to be in Program Files and why.

@HugeLunatic has done loads of CEP stuff, and might have a more informed and/or coherent contribution to make.
What I lack in decorum, I make up for with an absence of tact.
HugeLunatic

You cannot do a Fix Integrity when making a CEP. When you rename the TXMT you do need to do Fix TGI.
Your new MMAT has the same Instance as the original, so you need to change that. The best way to do that to avoid conflicts with other CEPs, is to use the MMAT name as a hash using Hash Generator.
The only resource that needs to go in Program Files is the MMATs. The rest can go in Documents.
Life Stories | EA Sims 2 Store Items | EA Pre-Order Incentives | Pet Stories | Dog Agility Items﻿ | Castaway Stories  | Holy Simoly Add-ons | Overrides and Defaults
4esf Archive | Holy Simoly Archive | Sims2Artists | tumblr | CEP-Extras List
If you enjoy the content on s2a or GoS, consider donating to support hosting costs.
celebkiriedhel

That's the tutorial I was following Nysha. Thankyou for replying, I appreciate it. :D

YAY Lunie! Thanks for posting! You were posting as I was answering Nysha.

OK. So let me check that I understand what you are saying - (because saying it back makes it easier to understand for me).

it's ok for the new subset to be called fabric and if I do everything else right, it will pick up recolours done for the barstool when it has two subsets.
I've stuffed things up because of the fix integrity that I did, and I need to change the instance using the MMAT name as a hash on the new MMAT file.
Then I can separate out the new MMAT file for the program documents area, and the rest goes into the zCEP-Extra folder in the game folders.
Simthing for everyone

"No Boom Today. Boom Tomorrow. Always Boom Tomorrow" - Ivanova (B5)
Having trouble with the Graphics card and Sims2? Feel free to pm me here, or in this forum at Leefish Sims 2 Graphic Cards
HugeLunatic