Hey, just wanted to let you guys know I'm working on a hand edited UI combining the green and default UI colors to make a Sims 2-esque UI coloration mod! I'll upload pics when I have worked out some of the kinks with my current build of the mod.

Hopefully, I can find the motivation to make the pink UI I've been dying for.

Quote:
There's a pink UI already though, right? I'd love to see a more neutral color. Something that's generic but not boring.
insert signature here
( Join my dumb Discord server if you're into the whole procrastination thing. But like, maybe tomorrow. )
PrincessPretty

Oooh really? After playing Sims 3 for so long, the old blue UI gets... annoying.. I'll check for the pink one.
To see a world in a grain of sand, and heaven in a wild flower, hold infinity in the palm of your hand, and eternity in an hour.

Quote:
Click me!
insert signature here
( Join my dumb Discord server if you're into the whole procrastination thing. But like, maybe tomorrow. )
PrincessPretty

Looks amazing! It looks like it has a rainbow look to it in-game.

Quote:
It might have given my eyes diabetes, but I do think it needs more sparkles. And honestly, looking at it now I'm missing unicorns. Pink fluffy ones that look like sugar candy, I find they go great with my Sweet Treats.

Seriously though, that recolour gives me a headache if I look at it for longer than 3 seconds. Everything about it makes me wish I didn't have to be burdened with the taste (rather, the lack thereof) of my fellow human beings.
insert signature here
( Join my dumb Discord server if you're into the whole procrastination thing. But like, maybe tomorrow. )
PrincessPretty

I'm pretty girly, you'd cringe at all the pink in my game.

Quote:
You'd probably cringe at the boringness of my game. I'm very boring. I used to share screenshots of my boring Simming all the time but I got permabanned off the The Sims subreddit for being too much of a grumpy old man*. I wish I could have my own MTS thread to share screenshots on...I have hundreds of them sitting in an Imgur account.

* I think that's the reason. They never really elaborated on it. Either way, it sucks balls. When I take screenshots and spend way too long touching them up, I expect a Reddit audience....
insert signature here
( Join my dumb Discord server if you're into the whole procrastination thing. But like, maybe tomorrow. )
Spamaccount
Lab Assistant

Well, I tried. I thought making a Black/Grey color scheme would be the easiest to start with, but even that was a pain. I had to edit all the files by hand, which was tedious and made it especially annoying when editing certain files didn't produce any of the changes I expected.

Opening Screen. It only looks so dark because of the screenshot type, it looks quite a bit brighter in-game

Some progress was made, but you can start to see how difficult this is. Half successfully changed, half still blue. And all the icons unchanged too.

Loading screen. Need to do something about the text color.

I'm assuming this is a problem with the cache; it starts blue but changes to black after you mouse over it.

Notice that annoying tear in the interface, an unfortunately frequent issue.

IMO, Live Mode is where it looked the best. Just need a new text color and it looks pretty decent

Unfortunately, some of the panels in the other tabs are incomplete...mostly black, but the side panels are blue

Build/Buy was much more frustrating. Full of inconsistencies, which is the big issue with doing everything manually.

And there were still some files I couldn't find...

So that's where I got with this. I might consider doing some more once I get access to a batch editor, but for now I'm not too excited about doing much else. I considered just cutting out most of it and uploading it as a mode for Live Mode only, but then I couldn't track down the last remaining panels. It's harder than it looks... but! If you have patience, there's no reason you can't use one of the given mods to create any of the basic color schemes you want. It might not be good enough quality to upload, but for personal use something like this would be good enough. Or pretty close to it, at least.
tizerist

Looking good, I'd definitely use this with a little more work. I do wonder what controls the font colour...either way, I think a very light grey should work best.
insert signature here
( Join my dumb Discord server if you're into the whole procrastination thing. But like, maybe tomorrow. )
PrincessPretty

If you can't find all the files, I'd suggest downloading this one and editing those files instead of looking for all the files.
To see a world in a grain of sand, and heaven in a wild flower, hold infinity in the palm of your hand, and eternity in an hour.

Good plan. But I do recommend seriously turning the saturation down on your monitor if you're going to be working with those files for longer than 5 minutes.
insert signature here
( Join my dumb Discord server if you're into the whole procrastination thing. But like, maybe tomorrow. )
mixa97sr
Top Secret Researcher

That pink UI looks like a match made in heaven for Katy Perry Sweat Treats.
PrincessPretty

I'm seriously in love with it! Almost every thing for my sim is in pink. I think my sim hates it. xD
To see a world in a grain of sand, and heaven in a wild flower, hold infinity in the palm of your hand, and eternity in an hour.

This message has been deleted by Grijze Pilion. Reason: What the fuck did you just fucking say about me, you little bitch? I’ll have you know I graduated top of my class in the Navy
Spamaccount
Lab Assistant

Well, there's the rub. Piggybacking off this person's hard work was my approach and somehow I still couldn't get this thing to work out without becoming a giant headache.

As far as the text goes, I believe dino posted a way to change it in Post 15, but I haven't given it a crack.
BloodyScholastic

@Spamaccount I am looking forward for your recolor work, have been waiting this UI recolor mod from long time ago. The black recolor is cool, although you need to adjust the font color to match with the black background. Experiment with other color, for example, white. White font is best to be contrast to the black background and easy on eyes. I do not recommend blue colored font because blue color is too clashed with dark colored background.
I moved my downloads to Simblr thebleedingwoodland
My newer quality downloads on my blog The Bleeding Woodland
TonyTajiri

How hard would it be to do a complete UI overhaul? I am also sick of the blue.
AGuyCalledPi

I'd totally fancy having somewhat of a flat look to the whole game. That's definitely possible to do...it just takes a shit ton of time. Same goes for the layout. So theoretically speaking, it's possible to make a TS4 skin for the TS3 UI. But who has the time for that? It'd take weeks. The big problem with redesigning the UI is, many elements (especially buttons) are duplicated all over the place. If you were to redesign something you'd need to copy and paste it into many dozens - maybe even hundreds - of other files. @jje1000 @dino_rex @BritannicStepanova Proof-of-concept main menu redesign. It looks stupid now, but if I were to redo every element on this screen I bet it would look pretty sweet. Of course, it would also help if I were consistent with my shading and colour usage, and if I were to read up more on flat design. I know there's like rules and stuff. Only thing photoshopped is the text colour and the check mark on the play button.
insert signature here
( Join my dumb Discord server if you're into the whole procrastination thing. But like, maybe tomorrow. )
dino_rex

Gray UI for Testing
Sorry been gone so long! Reinstalled TS3 recently and came up with a gray UI for testing as I promised ages ago.

This is a complete overhaul. Please test if you get a chance and report issues before I submit for upload. Thanks! 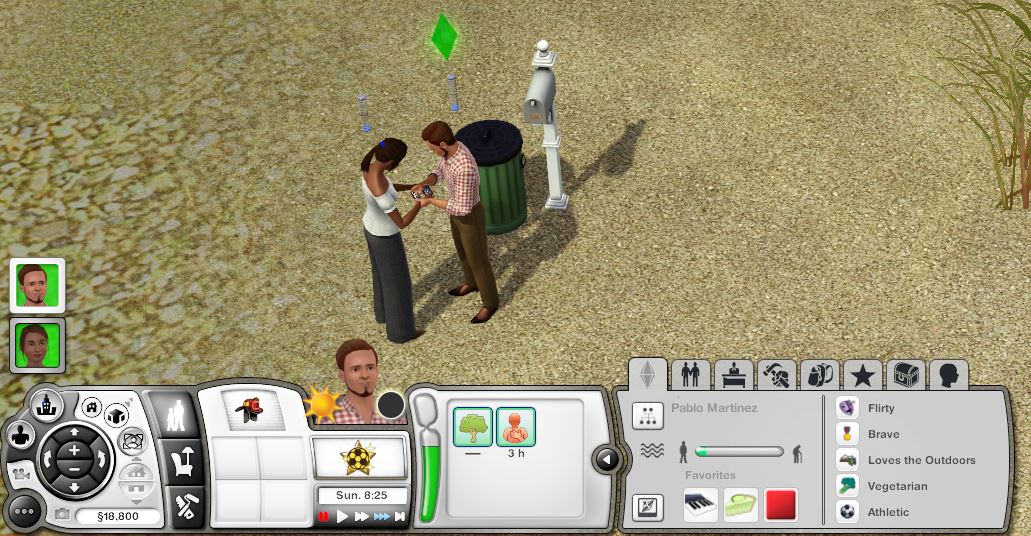 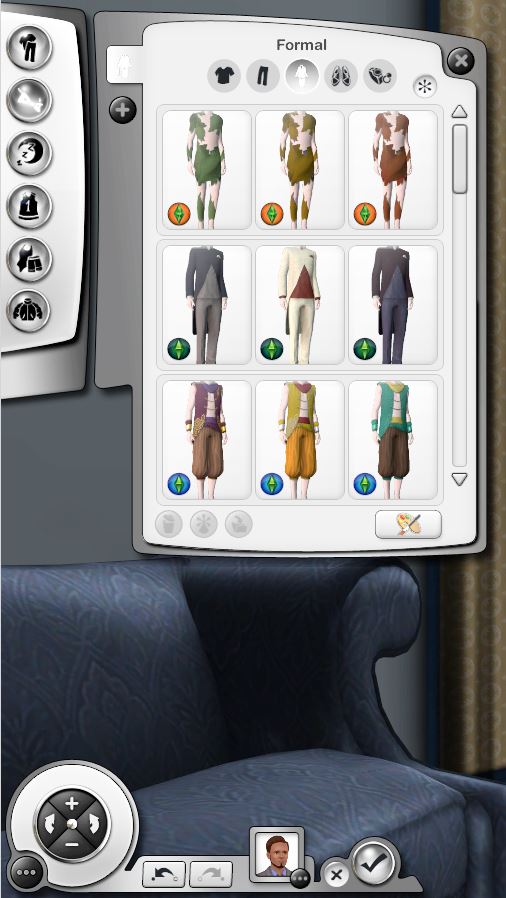 Instructions:
- Download zip file. Unzip to your usual ...Mods/Packages folder.
- Any other custom layout files (more mole options in CAS), should go in the ...Mods/Overrides folder (assuming you're using the MTS framework file)

Known issues:
- *still haven't figured out how to change the blue spinny cursor!
- *making everything shades of gray means the color contrast is an issue, especially with text
- **the glow on the store advertisement on the neighborhood launch menu is still blue
- **in the lists in dialogues, mousing over the alternate lighter colors does not change color
- **the '...' menu items are hard to read when moused over
- I don't have Into the Future or Island Paradise, so can't test them, but the image files should still be in the packages, so hopefully they work

* items I may not be able to fix
** items I'd prefer not to fix, unless they're annoying, as the time/effort involved may exceed the benefit

PS - I love that people are making other recolors!! Feel free to ask me q's about the files/process I've used.
dino_rex

Ok, the difficult to read light gray text is bothering me. (Because of the way I simplified the layout colors, it's not super easy, since darkening the text makes the main game menu colors super dark). I'm working on a fix...
PrincessPretty

They grey looks awesome! Though, to me, it looks too bright. Nice work!
Also, I think the Sweet Dreams recolor changes the blue loading thing. I'll have to check.

@GrijzePilion Can I ask where you got the background in your concept art? I'll try to recreate it.
To see a world in a grain of sand, and heaven in a wild flower, hold infinity in the palm of your hand, and eternity in an hour.

Wow, that would be great if someone figured it out for Sweet Dreams. I really want to know how to fix that!
Which part is too bright? The text? Or the layout in general?
Thanks for the reply
Back to top