Hi there! You are currently browsing as a guest. Why not create an account? Then you get less ads, can thank creators, post feedback, keep a list of your favourites, and more!
Quick Reply Print version
Search this Thread
Replies: 520 (Who?), Viewed: 177254 times.
Page 3 of 21
gittevdv

I just want this world to be ready. I want to play in it because it looks very beautiful!
Advertisement
Crowkeeper

Yeah... about World Machine and erosion... I warned you about it, as it is too strong, but you can change that in erosion properties, just to get a bit of the erosion effects, without changing the world terrain shape. Just move all the sliders to the left, but do not move them to the very end, enough for erosion to make some small changes that will make the world look better. You don't need to make changes on this world as it already looks too gorgeous, but this could be a helpfull technique to make your worlds look much realistic with no effort whatsoever.

And is that an eclipse?! I need to start making some custom moons, and that's where Space Engine comes in handy.
pj

Yeah, World Machine will change your terrain a bit due to erosion wearing down your sculpted terrain- which is why it's best to do it at the very beginning.
Monsoon

Or you can just copy the fragment of current heightmap you want to remain the same and then paste it on the heightmap generated by the World Machine. Then all you need to do is to smooth the line between the two and voila.
Stuff by me on MTS

@Jawusa, you seem to know more about planets and space than me, I didn't know binary star systems existed so that could be an explanation

About the sun, I really like its actual size and the glow around it (I'm using a modified version of jje1000's lightning mod), but I can still change the colors, I'll look into that.

About World Machine, I like Monsoon's idea so I'll try to use it when I create the volcano

Alright, here's a small update!
These are the things I've been doing in Nea Divarapolis: 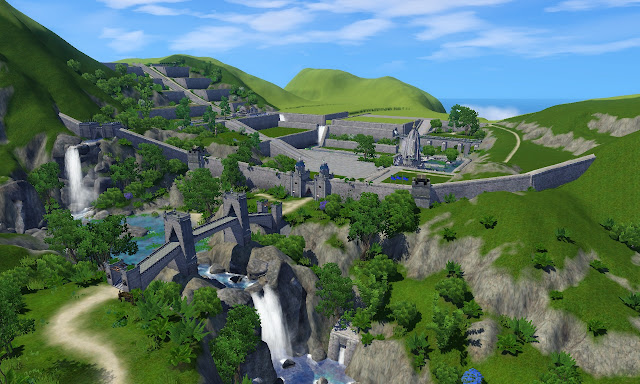 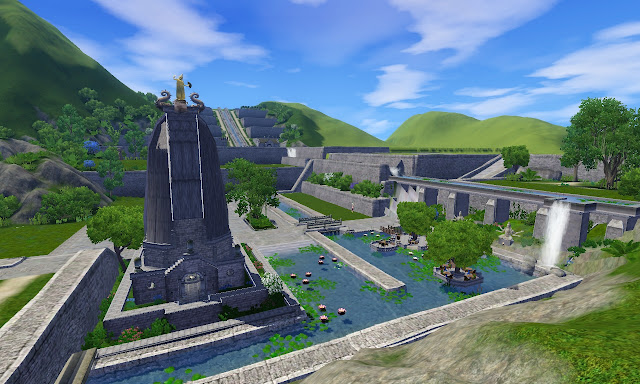 Overview of the lower part of Nea Divarapolis and its canals. 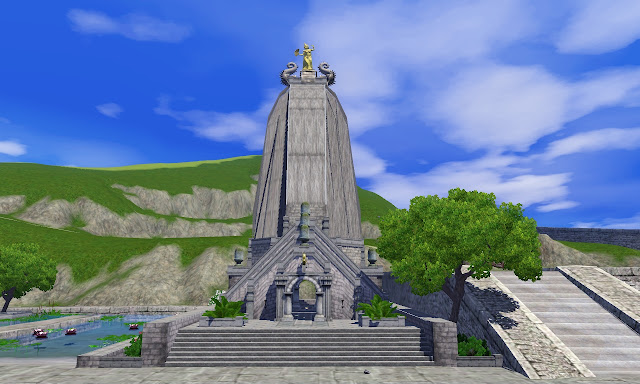 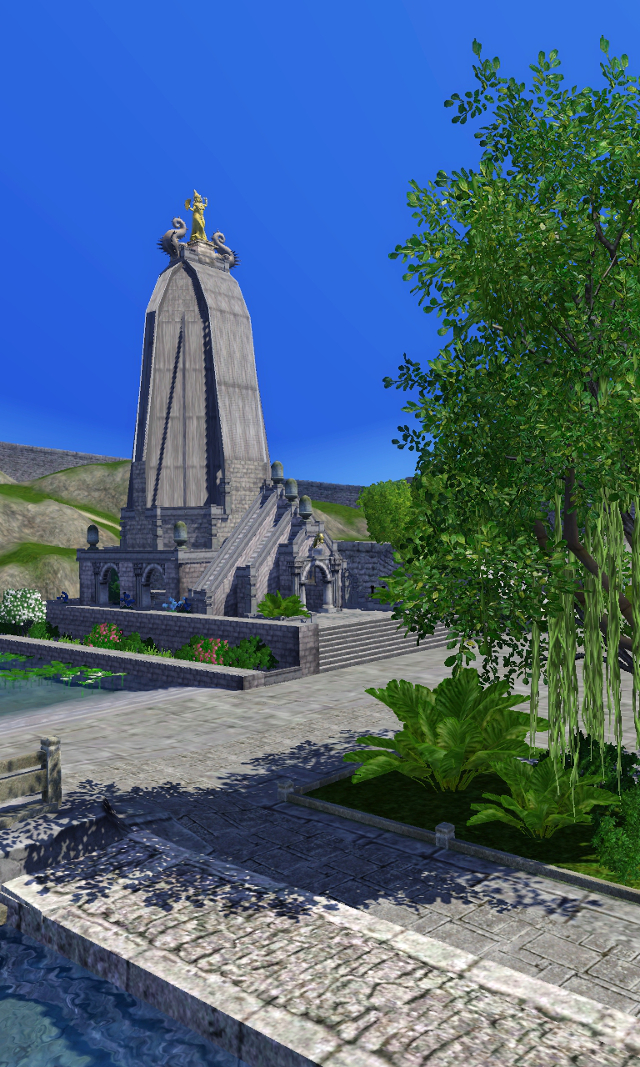 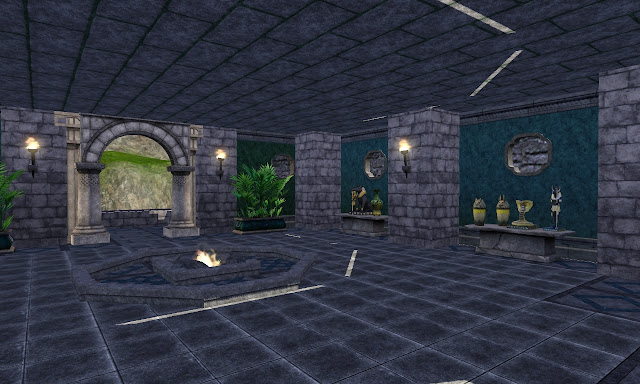 This is the first temple I've built, it's inspired by the hindu ones. In a basement there's the vault of antiquity. Later on I will adapt it so it's part of the tomb system of the island. 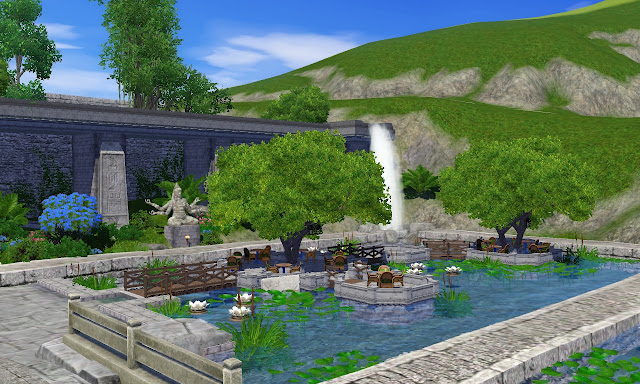 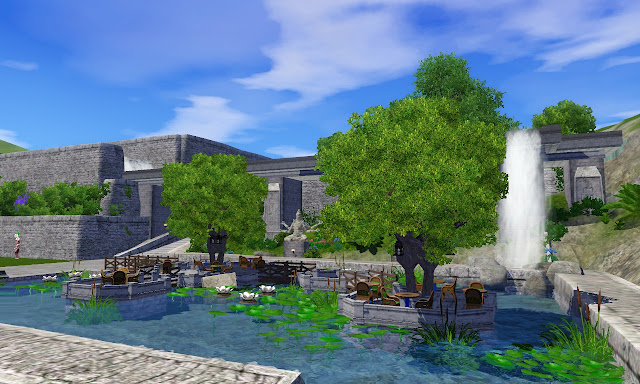 Outdoor restaurant by the canals. 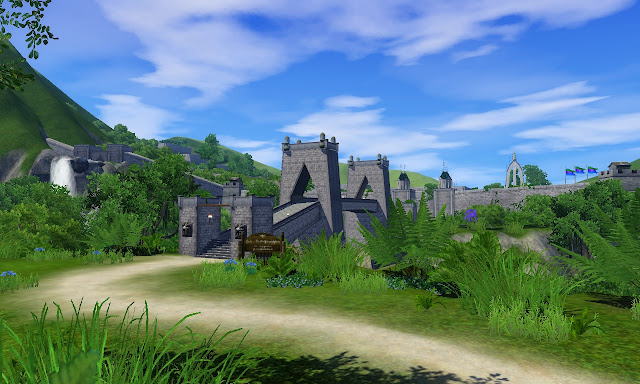 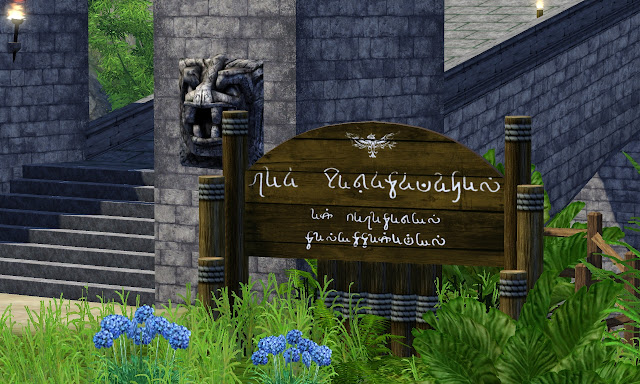 Welcome sign. I've created a custom writing system that I'll use for different inscriptions around Uranesia, you'll have to decipher them in order to go on with the challenge

The message in this one is no secret, so I reveal it says "Nea Divarapolis", and below: "ex cineribus resurreximus" (Latin for "from the ashes we rose"), connected to the history of the town. 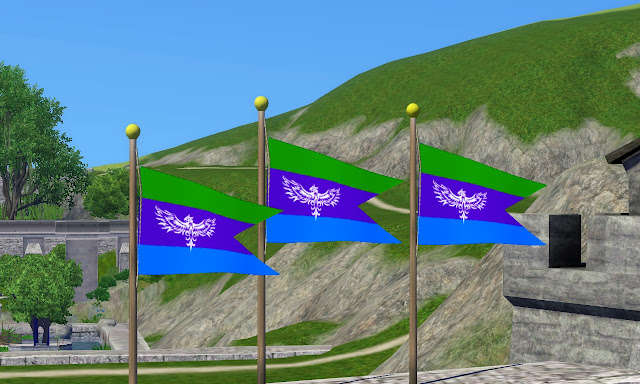 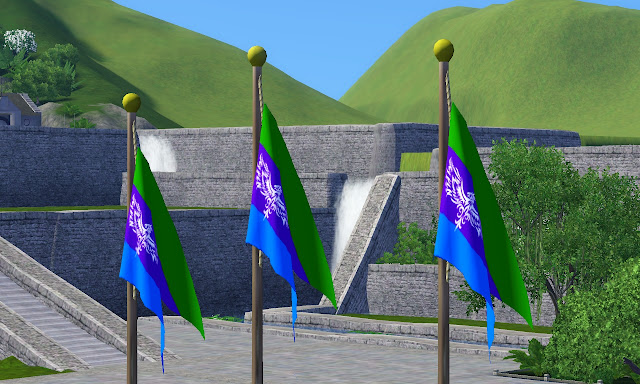 And this is the flag. The green stripe represents nature, the purple one religion and blue one the sky and the moon. In the middle there's a phoenix, the symbol of the city. 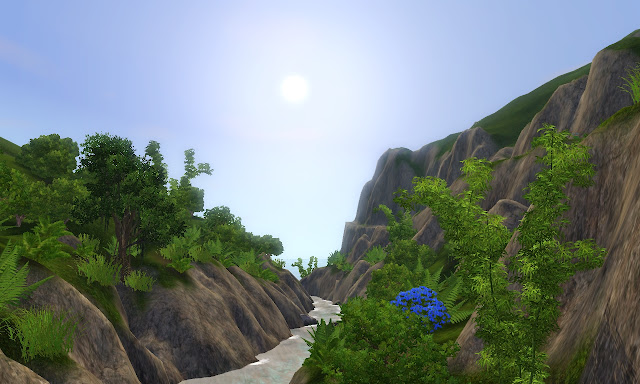 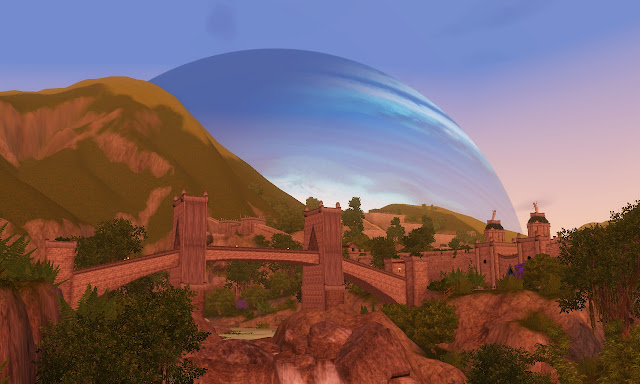 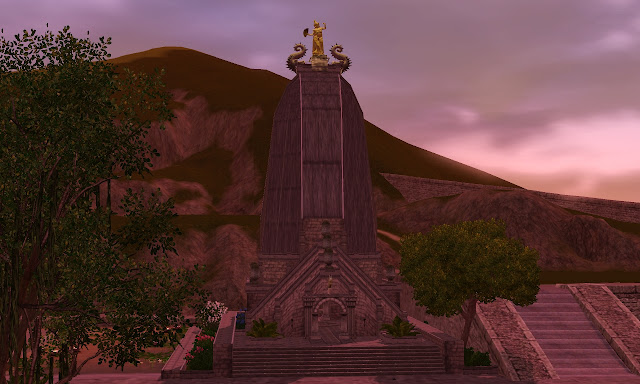 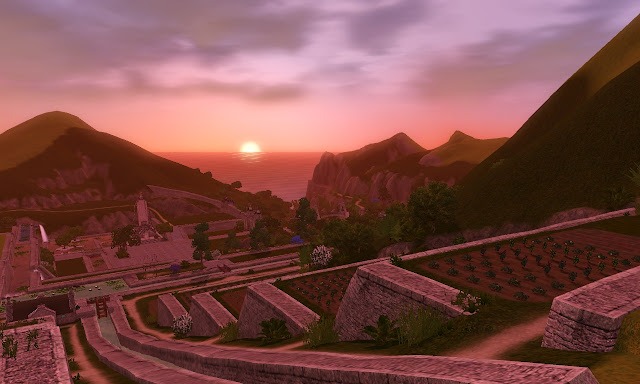 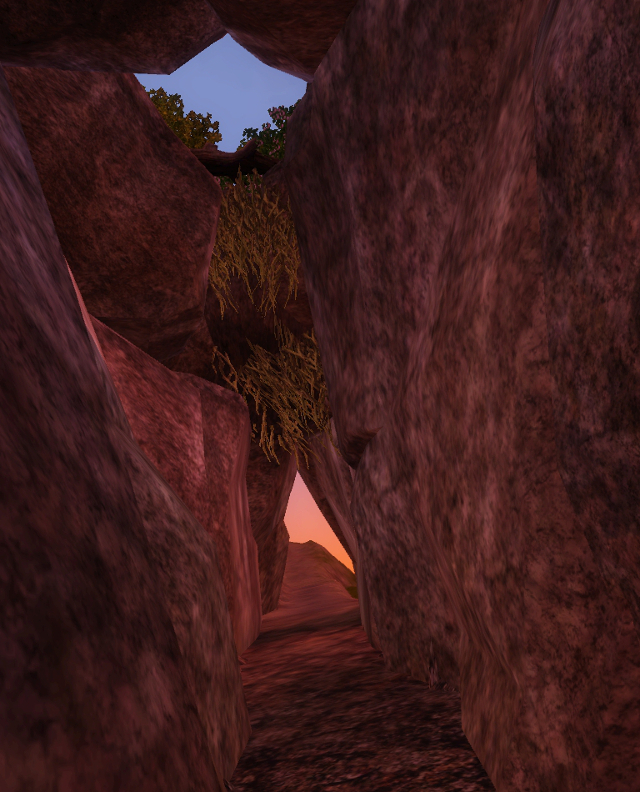 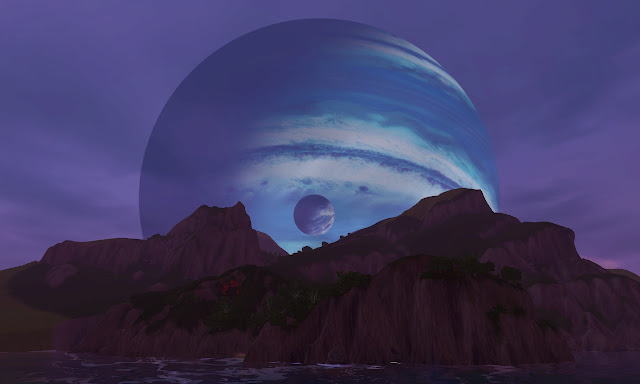 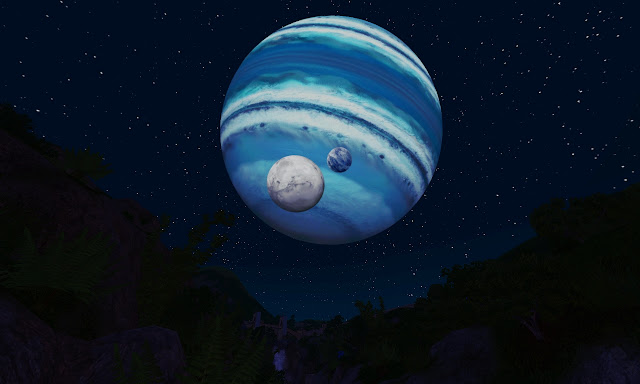 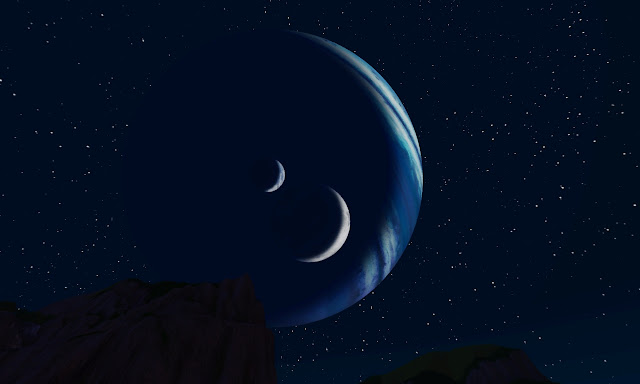 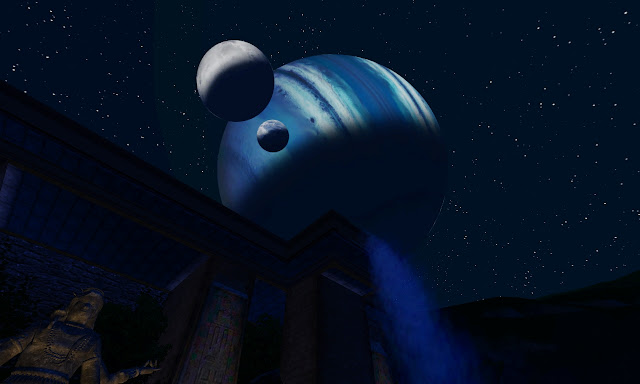 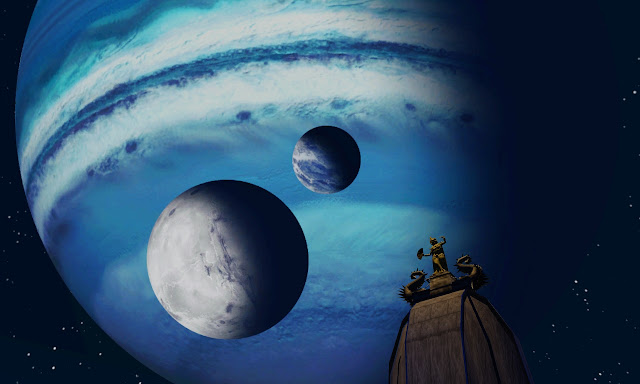 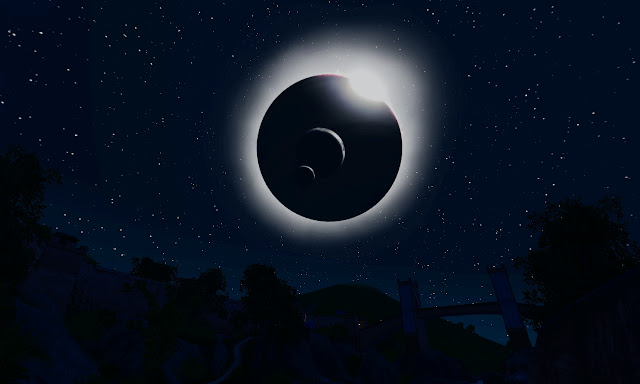 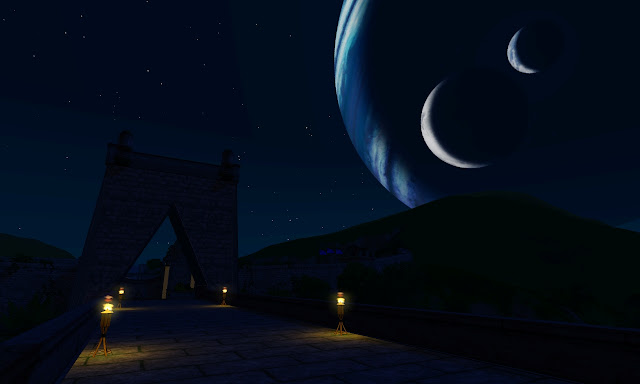 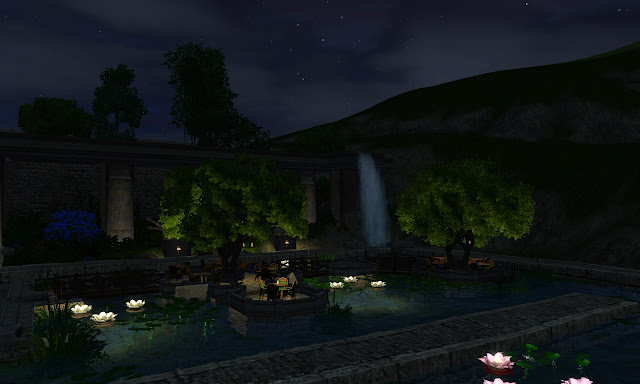 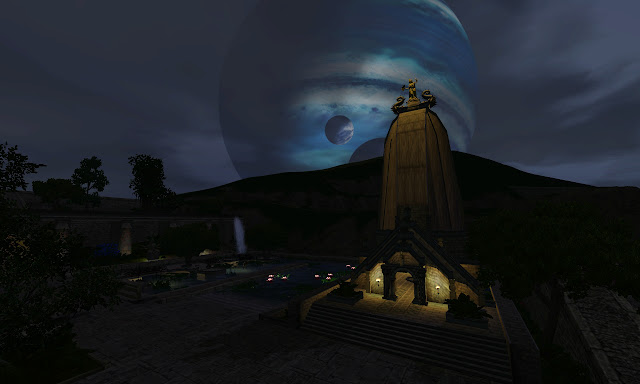 I hope you like it!
Find all my creations here:
My blog: Nilxis Designs // My Tumblr page: http://nilxis.tumblr.com
scoopy_loopy

So glad the 'moon' no longer is transparent on the dark side! :D
Well that's what happens when you're on your own and you're alright at letting nice things go
Crowkeeper

Getting more and more beautiful with each update

I really love the magical atmosphere your world has. I just can't stop staring at these amazing screenshots. Can't wait to play it

There is only one tiny little thing I am not entirely sure about - the armchairs. (screen 6,7) Cant really explain why but I feel like they dont belong there

Edit: I saw this lot today and immediately thought of your world: http://modthesims.info/download.php?t=271303 I think that something like this would be really pretty in your world

Looks great! The nighttime scene looks incredibly mystical with the clouds and the planets. I can't wait for the floating islands!

However, I can't say I'm that big a fan of the wooden sign or any flags- it looks a bit too modern, basically something you might find outside a tourist attraction.

Maybe turn the text vertical and pack it in more densely?

The flags' locations will also need to be carefully considered as well- to avoid making it seem too modern. I don't remember that the Greeks or any Southeast Asian country used flags a lot.
Jawusa

Anyway, as said it's your world. As for the sunset colors, this picture might be helpful for sunset in other star systems. here and here

I have been obsessed with Mayan cities for 8 years. You have no idea how much I've wished I could play in a city based off them. This is literally my dream come true. Many thanks. I'm so happy.
Crystal_Fox23
Test Subject
#64

OMG this is beautiful...i need this world in my life....like 5 years ago lol XD
Tigerdyhr

This is yet another one of those situations, where I desperately need a "Worship" button.....
SimsMatthew
Instructor

Contrastingly I find the wooden signs and flags alright, it seems the city is to be viewed in the perspective of a local in that ancient time, so the walled city should be prominent enough to build a strong civilization

Great work anyway, I absolutely love the designs, but I think that the custom moons and planets, despite their beauty, can become too "fantastical" with the world, I am just suggesting, you may want to offer one version with those and one with normal ones.
Jawusa
Trainee Moderator
staff: trainee moderator DELETED POST
17th Aug 2015 at 4:36 PM

This message has been deleted by Jawusa.
Crowkeeper

No idea why ppl are disagreeing with you. It's always better to give options; one version with the custom moons and one without them. Why the hell not?
Stuff by me on MTS

First of all, thank you so much for the many comments and your different opinions, that's really helpful

I've considered some of your suggestions:

@Crowkeeper, yeah, those armchairs look a bit too modern, so I've replaced them with these chairs:

Does it look better?

@jje1000, I agree on the wooden sign. I wasn't too sure about it. I still wanted some kind of sign outside the city, so I've come up with this: 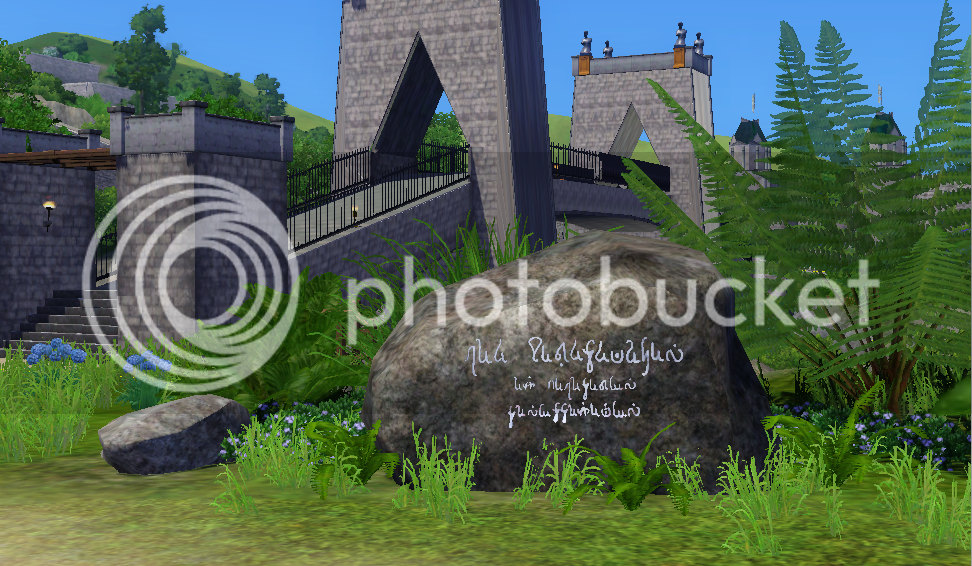 It looks more "primitive" and in my opinion it fits better. What do you guys think about it?

About the flags, that's not their final location

I'm going to place one on each of the two towers along the wall and maybe some outside the royal palace, but not more.

Finally, about the moons, I won't remove them as they are a very important part of the identity of the world and really help getting the fantasy feeling I'm looking for. I won't release different versions of the world either. I would do it with another kind of world, but this one is way too complex, I would have to check the tombs work twice, assign sims' relations and jobs twice, etc. That would be a lot of work :/ However, it's very easy to replace the moon with the default one in order to get rid of the custom one, you just need S3PE, so it won't be a big deal

PS: I forgot to add, @Jawusa, these are the 3 different sunsets of the world:

All I can say is, "oh my god, oh my god."
I love everything about this world. I think I'm going to be taking an awful lot of screenshots for my wallpaper.

It's just so incredible, so effing BEAUTIFUL.

I love the moons. And that's the world I want to download.

EDIT: I found SimsMathew's idea to have merit.

But I've now read your response - your decision to keep one version.
I agree with your reasons.

:lovestruc This is your world, your vision. And it's beautiful. :lovestruc
Jawusa

WOW, all of the sunsets look good. It's your world, I know but it would look even more exotic if you would make the sunset a bit redder.

Do you also have pictures of sunrises?

I think that the stone is much better then the wooden sign! But maybe it would be even nicer If you used much darker gray instead of white for the lettering?
so that it will look somehow like this? http://avitus.alcuinus.net/schola_l...es/1a_sulla.gif

About the chair: I think that these are better. Have you tried the wooden chairs from supernatural? (third in the cathalog costs 45 simmoney)


Quote:
I believe that is just because the screenshots are taken in caw. The custom content will always turn to "ea content" so it looks funny sometimes.
Visit my Tumblr for more creations http://crowkeeperthesimmer.tumblr.com :)
baskerwil
Lab Assistant
#74

The game can have this effect on fences if you view the lot from another lot; e.g. if you're on a neighbouring lot, or sometimes in neighbourhood view.

I have the same with store fences in my game.
jje1000
Mad Poster

FYI I think the bridge rails are custom content, CC doesn't appear in CAW since it's separate from the main game engine.

The sunsets also look gorgeous!
Back to top