I'm sure they've thought about charging money for color swatches in TS4. There is nothing stopping them from doing so since it's a live service game. They could whip micro transactions into the game at any time.
Cyber Tip Line for Exploited Children
EA's Game Changer Policies
SneakyWingPhoenix

On December 4th is the upcoming next maxis monthly stream at 11 am Pacific .

The Sims Mobile introduce an update, that offered new recolors that were charged for real life currency.
P.S. Sorry for my bad english.
hiabara

It really sucks to have to pay for recolors, but it's not just Sims Mobile. They do pretty much the same with TS4. There are quite a few outfits and objects that are simply recolors of older things (I'm too lazy to look it up, but I think the curtains and window seats from Seasons and Cats & Dogs were one example). Of course someone out there will probably argue that the recolors are nice and are not the only thing you pay for, but I find it lazy and awful to sell recolors and then usually even add them as new item in the catalogue to clutter it up even more.
hiabara

The "free goodies" for December are some holiday decor, food, three or four hair styles and some clothing. Oh, and most importantly - New fursuit of course!!! 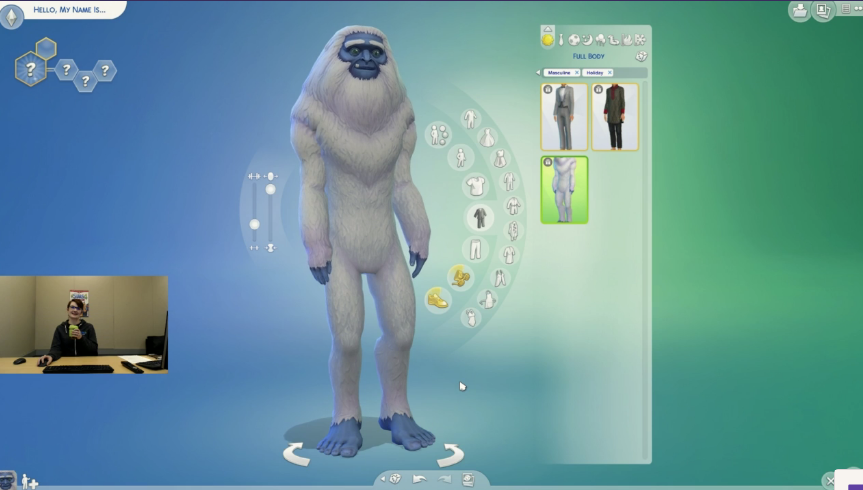 Free stuff is always nice and I'm always up for new recipes... :>

Buut that's it. It was only 20-minute long. Some players were hoping for an announcement to a new GP.
hiabara

Quote:
I really thought we would get one more SP this month before Christmas. Last SP was in March. GP would've been a possibility too (last GP was in February). Really wondering why these teams haven't announced anything for so long. I was so sure they would use the holiday/Christmas market to pump out one more pack.
Chax

Yeah... And the guru said during the stream that now they were going to be very low profile because of the holidays and such so...
terula8
Forum Resident
#34

That's been true in every single sims game since TS1. TS2 is actually the WORST with that - in some cases, it's a clear duplicate (not even a recolour), and that goes for hair AND clothes.
SneakyWingPhoenix

Quote:
An official survey. Hope they use it improve the game, not exploit in greedy means. Shouldn't we make a big noise that this something hopeful for once? It's a freaking survey. Shouldn't we like announce it big time?
P.S. Sorry for my bad english.
Volvenom

I'm going to post this here, because for builders I think it's going to be a very useful technique. If I'm wrong link me and I'll remove it. Kate Emerald has found a way to connect to different height foundations:

Perhaps we should start up the Building forums again though ...
My youtube videos: http://www.youtube.com/user/TullaRask?feature=mhum
My blog: www.volvenomtullarask.com
Chax

The solution is so simple.

I wish the Building part of this forum was more used but it's been pretty dead...
Volvenom

Yes it's almost embarrassing, but I guess I didn't think it would work with weather, but she says it does so ok.

It only takes a couple to shake it up a bit, but I've been working on my portfolio, so move on to having some fun.
My youtube videos: http://www.youtube.com/user/TullaRask?feature=mhum
My blog: www.volvenomtullarask.com
Inge Jones

She's very clever!
"You can do refraction by raymarching through the depth buffer" (c. Reddeyfish 2017)
Victor_tor

Here you can see more of my creations and conversions for sims 3. ;) I`ll glad to see your comments in.
SneakyWingPhoenix

Hopefully, they don't fix this 'bug' (or remove the intended "feature" of no split levels). Let's pray that If they implemented this as a much better shortcut don't screw things up even more by breaking down this workaround as well... oh crap, I shouldn't jinx this.
P.S. Sorry for my bad english.
Chax

I've just tried it out and can confirm it does work - though there is a little issue on the wall connecting both rooms : That part of the wall will have to be covered somehow.

It's also incredibly restrictive. Doing changes to it after isn't easy.
My youtube videos: http://www.youtube.com/user/TullaRask?feature=mhum
My blog: www.volvenomtullarask.com
Mspigglypooh

So basically what I'm seeing here is we got some awesome tools and yet they're still restricted? Nice ðŸ˜‘ðŸ˜’
Volvenom

It's not meant to be used like this. Actually they tried to avoid it. We can't really blame them when we do our most to break it.
My youtube videos: http://www.youtube.com/user/TullaRask?feature=mhum
My blog: www.volvenomtullarask.com
Chax

And the splitness is only available on the first level, can't stagger successive floors like we could with CFE... or can we?
"You can do refraction by raymarching through the depth buffer" (c. Reddeyfish 2017)
Volvenom

I made us a thread in building Inge: http://modthesims.info/showthread.php?t=621133

Sorry I forgot to hashtag you or whatever it's called. I was looking for my thread and started building up some aggression only to realize they had made my thread a sticky

I usually ignore stickies, because they are often ancient

So I was randomly clicking around imgur and found this: https://i.imgur.com/ei44HDH.jpg

The number at the top represents what the community rated the pack. The two numbers at the bottom show the raw Build mode and CAS content by count. Pack features, such as weather or vampirism, aren't represented in any way beyond the user ratings taking them into account. Two things blatantly jump out at me:

1) There's legit no correlation between item count and rating. Vampires for example beats Dine Out in every single category, yet has a lower user rating. Parenthood is also the lowest game pack in terms of raw, tangible content, but has the highest rating. This is surely due to features and gameplay content, which would explain why Seasons for example is rated so high despite having the fewest items (also felt like Seasons had the most unique and usable items), but it's sometimes pretty odd to see the disconnect between content provided and overall rating. It's a personal taste, but Vampires jumps out at me as being totally underrated.

2) Stuff packs - big fucking surprise - are a massive rip-off. Game Packs have double the price and seem to average in at about 170 total objects PLUS their new gameplay features. Stuff Packs on the other hand seem to average in at about 60 objects and cost half as much. The lowest rated Game Pack in terms of raw content (Parenthood) being compared to the BEST rated Stuff packs is like the only scenario where it's double the content and double the price, but this of course isn't accounting for the lack of gameplay features amongst the stuff packs.


It's not a perfect measurement of quality of course. City Living padded the hell out of it's build mode with wall decor, Pet stuff copypasted the majority of it's objects, and Cats & Dogs is practically obligated to have a high object count since it's harder to provide new pet content retroactively. Still, I find it interesting to see the disconnect between raw content count and overall rating, as well as seeing some rather damning evidence that Stuff packs - shocker - aren't worth it. Both their user ratings and raw content leave something to be desired.
hiabara

Quote:
For some more context - Someone posted that graphic on Reddit https://www.reddit.com/r/thesims/co...ople_decide_on/

Personally I thought that graphic was a mess. Hard to read, the community voting is only from the SimSupply community and pure numbers of content are interesting, but as you said - Some packs like Cats & Dogs were just stuffed with 100 wall decor items.
I'm also really confused why Cats & Dogs got a fairly high rating and Vampires such a low one. Both added new mechanics, but I think most people can agree that Vampires was done so much better. I guess (and hope) it's simply because a good amount of people doesn't like playing with supernatural creatures.
Back to top