Oregon Trail Challenge!
(taken and adapted from jj10101010 sims 2 variant I am expanding the simerican settlers and the decades challenge to add the oregon trail to the legacy, my sims just got off the boat to simerica if you are interested in my across the atlantic challenge let me know though my family has joined another family for this challenge)
You and your family are traveling to Oregon (for whatever reason) in 1848. But there are obstacles along the way!

Start as one of the following:

Start as a banker: have 100 dollars after building house instead of 50 (hardest challenge)
Start as farmer: everyone gets 2 quick meals a day instead of 1
Start as a carpenter: along with chairs a single bed may be accessible to them

Choose which season you want to "leave" in (if you have seasons) make seasons two weeks long. I would say delete holidays but that is totally up to you.

Roll a dice (1-8) for the amount of sims in your wagon. (or choose your size i went with 7)
You can have more than 8 with mods, if you want a challenge.
Create them in CAS

Move them into an empty lot or house. Build your wagon, it should be cramped with only chairs being usable. You may have it however you like, but afterwards, you must reduce your family funds to 50, unless you are a banker. (I filled mine with a lot of decorative books/pots/clothes) Also make sure you have 2 horses.

If the horse dies in a river: your speed is cut in half till you can get one at a trading post. If both dies you must abandon the wagon till you can get to a trading post. Sims can carry one item each (all produce and fish will count as one person's item) children can only carry something light. You must keep them on their feet 12 hours a day walking around (goodluck) or you must expand time to get to the trading post. When you get there they have an empty wagon with enough chairs you can have, but you must pay for the horses. (you can buy an extra horse at a trading post but only 3 horses at a time max)

once a week move the whole lot and all to another lot to change the scenery. Give yourself the money/ take away the money for the difference in land prices. No sulani in the fall through spring, summer is ok. No oasis springs in winter.

You can have one fridge/cooler (for 1 quick meal a day per person), and you can have beds/ tents outside of the wagon for nights and a fire. You can make money by selling things that your sims make/gather at trading posts. (no jobs)

12 hours a day sims must be in the wagon (i locked the door and let them talk, if you do this you might want a mod to turn off phone usage/ make a mess) the children can go to school in the time as if they are studying somewhere. The other 12 hours they can be sleeping in tents/ gathering or fishing

Every week, you come to a stop/ resting point. At this time, you may shop, sell items, stock up on food, and repair your house. I created a little trading post with a general store, animals, a bathroom with tubs and a playground. Also a carpenter's table, a produce stand, instruments, and other skill building items. Today you can also enter build/buy mode but nothing that requires water/electricity if you get a shower/tub I would use the excuse they are bathing in a river. You cannot buy them any walls.

Every 2 weeks, you come to a river. at this point, roll a dice. If you roll a 5 or a 6, you don't make it across. Otherwise, you make it, and continue on. (if you don't make it roll a dice for every possession you have 4-6 and you lose it including beds and horses, roll for each person if its a 6 they get swept away)

Every 5 days, roll a dice for each member of your party. If you roll a 6, they become sick (in 2 days roll again if 4-6 again they die). If it is winter and you are traveling roll daily (I recommend just trying to get them to survive in place during winter) also if a sim gets sick in game roll 4-6 they will die.

All woohoo is try for a baby

You lose if everyone dies.

After 28 days worth of travel. (Add days if you lose the trail or take full days off that are not trading days, if you skip trading days you can minus days.) you've made it! Continue playing if you want, or stop if the dice-rolling drives you crazy.


For more of a challenge:

Create a family of bandits. The more you have the more of a challenge it will be. If you notice one pass by your house in daylight, send a sim to fight them. If your sim wins you get 10 simoleons. If your sim loses roll a dice 5-6 they die and anything on them is lost. If the bandit passes by them at night roll for EVERY possession including horses 5-6 it is gone!

Create a family of native Americans if one passes your lot roll a dice. 1-2 hostile send a sim to fight. If your sim loses roll a dice 5-6 they die and anything on them is lost. If they win then you can ignore indians passing by your house for 2 days as they will avoid you. 3-4 nothing will happen as if the Indians avoid you. 5-6 The Indian is friendly. You can try to make friends and have them join the household before they leave.

Get a sim pregnant lol goodluck not even going to test that.

This is my first posted challenge please let me know what you think! any questions as well please post i can be a little scatter brained some times
delivered by my carrier pigeon, Jim Geom.
Advertisement
Enki

I started this yesterday with a full household of eight sims. They are two families, who pooled their money to buy the wagon.

Screenshot of family 1 at their wagon: 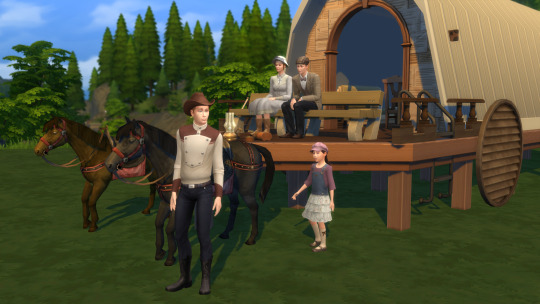 Starting as bankers was a huge mistake, surviving on a single quick meal per sim and day is brutal, especially with that caterpillar of a toddler. I expect to need to take many breaks for foraging/fishing, with the result of my sims possibly losing the trek and needing to continue on their own (at this point I will start rolling for raiders and wolves). They will reach the first supply station after 84 hours on the wagon, what might take them more than seven days, and then pemmikan (from Jungle Adventure) is high up on the list of purchases!

After a terrible first week life on the trail has gotten better for my sims.

- The cramped conditions are not a huge problem, since I always play with free will off. So that's one chaos factor less.

- Three days into the journey, my sims lost their cooler (and with it their daily free meals) to a fire and had to survive on raw fish.

- Next two of sims fell ill and technically died. Since it was the toddler and the girlchild, I allowed my sims to buy medicine from a doctor in the trek. However, for purpose of winning or losing the challenge, I gave myself two strikes (out of eight).

- At the first waystation I bought a bathtub and a grill and had my best cook create canned food. They'll need it, because the guide lost the trail and will have to take a 6 day detour, meaning the trek won't reach the second waystation before week 3.

- On a sidenote, I actually have two tubs and grills: one placed on the ground for use in camp and one taking up space in the wagon. That way I don't have to enter buildmode every night.

This is brutal... the deaths are at about the expected rate. If I hadn't put plot armor on half of my household, I'd be down to five sims by now, what sounds about right. The real problem is losing the trail ALL THE TIME. I'm in the seventh week and still have twenty-two more days to go.

Taking a page from the history book, my sims now drive cattle alongside the wagon (a single cow), so hunger is taken care of. Missing out on their three daily showers drags their mood down much more.

I made some minor changes to the rules:

One sim has always to man the driver's box. Sims napping on the bench do not count as driving.

Disease - If the trek includes a doctor, medicine is available for 50 simoleons. Must be taken before the recovery roll. Medicated sims make their recovery roll at 1-4 instead of 1-3.

Delay now isn't caused solely by losing the trail. Instead the even numbers work as follows:
2- Delay due to losing the trail
4 - Delay due to bad weather/road
6 - Delay due to a problem with wagon (randomly determined wagon if npc are part of the trek, if your sims travel alone it's always yours, of course)
Basically delay is still added as per the challenge rules, only the reasons are more varied now.

In praerie lots, even with a grill or bathtub present, sims still need to make resource rolls to actually use their assets:
1 - Find buffalo dung to cook with
2 - Find clean water to bath
3-6 - No such luxuries today
Sims 4/Detroit: Become human crossover
My variant/simplified BACC rules
Enki

I just finished the challenge. Not really won it, because I changed the rules here and there, but finished

I'll definitely play the challenge again some day, but only ever with copies of existing sims, not with unique ones that I

Starting wagon sim count: 92
(Wagon sims = townies and premades that are part of the wagon train, all unplayed but favorited)

The Phillips bought another draft horse at the waystation, Dewey.

The Phillips bought a cow, Altona

Daniel Phillips revived as a vampire

Hank Anderson (Guide 2) killed by vampire Dr. Straud (during the wedding no less)

Three wagons got left behind (mine and two others). Rolls will now apply to them only, everyone in the larger trek is assumed to reach Oregon safely (=83 sims)

Dr. Straud got killed by the travelers -> no more Snake Oil Forte

Carina Hille gave birth to Peggy Phillips, then died of exposure to the sun

Peggy Phillips got found by the wagon train

The wagon trio got (temporarily) captured by Lakota
A Lakota couple and their daughter joins the wagon train as the new guides (technically that means we also gained horses, but we’re already at the limit, so the mustangs will only be useable by their original riders)

John Phillips drowned, along with horses Plum and Dewey