The Displaced
This is more of a way to set up a new save file, especially if you like playing the premades, and want a new spin on them. I do not recommend doing it in an established save that you put work into in buildmode.

The Wicked Witch of the West has unleashed a storm on the simsworld. Houses are lifted into the air and put down again in random places. What’s worse, every transported house and inhabitant has put a curse on them that prevents them from returning home. Only the next generation is free to move, but even they cannot take the house with them, only objects that fit into their personal inventories.

How will the displaced sims deal with the change?

Warning: The more worlds you have, the more tedious this will be.

Also, this goes probably without saying, if you like the idea, just skip the dice rolling and decide who gets taken and where they will end up.

For every residential lot with a house on, both occupied and unoccupied, you roll a die.

If the number is higher than the house’s weight, then this house gets lifted by the storm.

Weight is defined as the lot size divided by ten and rounded down.

Use the larger number if the house occupies the whole lot, and the smaller number if you have much landscaping or free space.

Roll a die to see how many sims will be home by the time the spell hits. They will get lifted along with the house.

That means in large households one or two sims are guaranteed to stay behind.

Now determine randomly where the house will land.

One method to do this would be seeding a random numbers generator with the numbers 1 to [number of your worlds -1] and then count from the starting world.

Example: You have 16 worlds, you get a number between 1 and 15. Let’s say it is a 3 and your house is in Oasis Springs, then you count from Oasis Springs to the right and end up in Windenburg.

Viable targets are all lots (empty, built on and even occupied) in a world other than the world where the house came from and that are the same size as the original lot or larger.

Venues can be target lots, too.

If the target lot is occupied, households will merge.

If that brings a household over maximum size, some of the arrivals must merge with households in the same neighborhood.

If a house attempts to land on a lot that has been built on, roll a die for each house and add the weight. The winning house gets to stay, the losing house gets destroyed.

Each sim can rescue one object of their choice from a destroyed house, but only if the item is of personal value. Sims will always prioritize their favorite voidcritter card over the insanely valuable fully upgraded TV.

If a sim that stayed behind walks by the new home of their displaced former household members, or gives them a call on the phone, then they are allowed to follow them into their new household. If the target household is full, they will move as close to it as possible (possibly moving in with a neighbor).

Sims from households that were never lifted (aka residents of target lots) are only partially affected by the curse. They can move out whenever they want. But even they may only take a single object with them.
Sims 4/Detroit: Become human crossover
My variant/simplified BACC rules
Advertisement
1amCorbinDallas
Test Subject
#2

This sounds like a really fun way to spice up your game. If you've played this way, is there any play style you'd recommend? I think rotational game play could be rather interesting
Enki

Rotational play is definitely the best playstyle for this, with aging enabled for only the active household. I plan to choose the world that looks the most fun and stick to playing this one. Another approach might be to choose a world before rolling the dice and then play all the families of this world in their new homes.

So far I've only rolled for who gets snatched and where they will attempt to land. I have all the worlds, and out of them 53 houses got snatched by the witch, 27 of them occupied.
When you move the houses and households around, I'd recommend sorting them by their target world. So, first work through everyone who attempts to land in Willow Creek, then everyone who is on their way to Oasis Springs and so on.

This is my new Magnolia Promenade, the only neighborhood I finished so far: 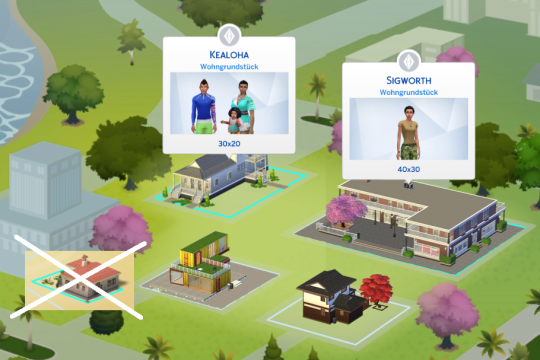 The Kealoha family left behind their teen and their house got shredded by the empty Willow Creek home that arrived here first. Likewise the Oasis Springs shack landed first, but was in turn destroyed by the container home.
Sims 4/Detroit: Become human crossover
My variant/simplified BACC rules
Back to top