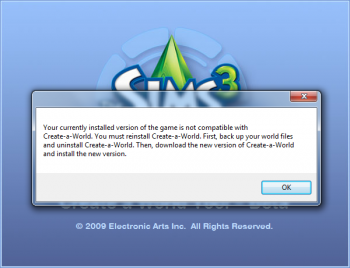 The workaround, originally found by Kiritra and now maintained by our members in CAW and Sims 3 Version Mismatch Work-Around is to

The FROM and TO would most likely change depending on what is older - CAW or the base game level. In the below scenario, my base game is patched to a higher level (level 014) than CAW (level 013), so I copy FROM base game TO CAW.

If the above steps don't work for you or you have questions, please post in the Q&A thread : CAW and Sims 3 Version Mismatch Work-Around

Even though the CAW version is the same, the installer is of different sizes (see image) and the contents of the Default.ini differs for the lines shown above. So, it appears that one would still need to redownload. I did not test if the older version works without being uninstalled as my system was recently reformatted and I don't think I'd be reverting things just to confirm this theory. If anyone has information to share, please do.

I can confirm that the older version works okay, as long as the Default.ini is changed to reflect version 13. Simsample 09:16, 3 July 2012 (EDT)

How to tell if CAW has been updated

See Do you know: how to tell if CAW has been updated?