The 1.31/1.32/1.33 Superpatcher has been causing issues it seems, and EA has since pulled the 1.32 Superpatcher file from the server. This action has caused major confusion on whether the games are fine when patched to 1.32 or if anything needed to be done. Furthermore, those with Showtime hasn't been able to start their game as they were being prompted to update to 1.32, but while Launcher reports there's a newer update available, it also states that the game is also up-to-date. Well, duh!

It remains a concern that those with Showtime, are being locked out of their games when

Shouldn't they be allowed a chance to logout and play offline? Well, enough of the editorial...to the issue at hand.

Note: (1) I've no idea if the issue exists on Macs, as I don't have the same tools that I used on the PC for OSX. But if the symptoms apply, you can try to follow along using the Mac manual update tgz files.

Note: (2) With the just released 1.33.2, the same issue is still occurring with the Collections folder. Since this is the one area I can personally confirm, I cannot say for sure if there are other similar issues, not with that sparse Patch Notes, anyway. I suppose we can just chalk it up as another "bug".

If you have one or more of the following symptoms, even if you don't encounter any issues or bugs, the game is probably not stable at this point; as people's game manifest bugs at different times depending on one's gameplay style. It also depends on how Story Progression is setup in your game (with mods or mod-free) for certain bugs to appear or not appear and on what timetable.

initial table courtesy of crinrict, who was also my sounding board for the Collections folder issue troubleshooting.

The cause is the so-called "leaked" 1.32 Superpatcher (filename: TS3_1.32.3.0150xx_update.exe for PC). Actually all the 1.3x SuperPatchers of March 2012 at the moment. The "leaked" 1.32 has incomplete code, I suppose. While all of the 1.3x to date has incomplete Collections folder contents. That's the 2 items I've been able to confirm. Others bugs (or "features") need longer gameplay sessions.

Here's my findings on all the differences, in addition to the images already posted above.

Resource counts in DeltaBuild0.package resulting from 1.32 incremental & superpatch differs as shown on the image on the left, using s3pe and PivotTable. 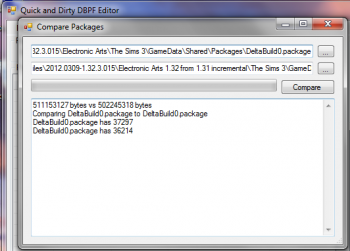 There are a total of 96 additional "deform*GEOM" resources in the DeltaBuild0.package file - for the Brow, Ears and Nose - for Teen - Elder age groups of both genders.


For the missing Collection icons: 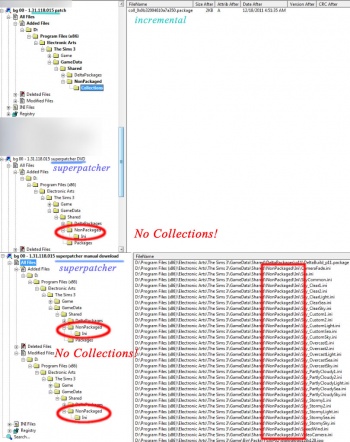 the 1.31 incremental patch only adds Showtime's coll_*.package, which is all right and proper. But all three of the 1.3x superpatcher does nothing - no creation, additions or modifications - on the Collections folder of any kind. 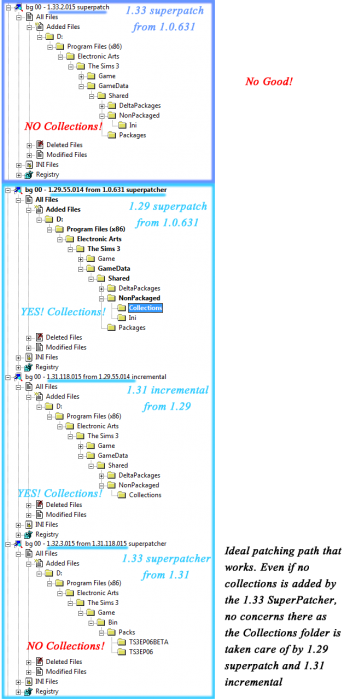 If you don't encounter the symptoms above or you're able to live with them, there's nothing to do.

If you do encounter the symptoms above and you're able to live with these new "features" because you like them and your CC is not conflicting, there's also nothing to do.

If you do encounter the symptoms above and have other weird stuff happening that no one knows whether it is a patch bug or a game bug, then before you submit a bug report, it is best to do so with a clean slate. And the only way to achieve that is by uninstalling since there's no such thing as an "Undo Patch SuperButton". But the trick is not to patch any old how, I've worked out the steps below to ensure the "cleanest" slate we can achieve at this point.

Another explanation of the issue: Patch 1.3x - What's the issue @crinrict's blog

Before you post in the MTS Sims 3 Help Forums, please try all the above suggestions. If you have questions on the above or have difficulties with the instructions, there's a Q&A thread here.

Do drop a line if you're on a Mac - if the above helps or has no impact on OSX. I'm sure folks are wondering...