After installing some/tons/any custom content in .package format, you experience one or more of the following:

This issue usually happens after installing the version 1.7 patch (or later) for the base game, or after installing World Adventures. Something changed in the game's coding with how it reads files. Certain files have contents which the game does not expect and due to that change in coding, it gets caught up reading those files over and over endlessly (thousands of times per minute), which is the root cause of the lag associated with those files.

Reasons for individual package files having this issue include:

There is no general problem with package files - package files in general are perfectly safe to use. It is only specific files that have problems.

The best way to fix this issue and to retain the custom content that you want to use is to identify the particular offending files and either remove them or fix them.

Works for any version of Windows and it is confirmed to work on Mac systems when using Mono.

This tool (currently in Beta) can show you any Sims 2 files, or possibly "corrupt" files in your Mods\Packages folder. It also lets you clear your caches quickly and easily. As it was designed to identify files that may cause the package file lag issues (and detects all of the different causes listed above), it is likely the easiest and quickest method to get things working well again.

While the Dashboard can detect many problems with package files that can cause lag, it may not detect every problem with every file. It's good to try as it detects objects that cause the Sims 3 Blue Lots Issue, but you will also want to try...

If you are using Windows, Process Monitor is a quick, easy, and free way to identify problem files.

Process Monitor is a free program that will tell you which files your computer is accessing. This lets you easily see if it's reading the same files over and over.

This looks much more complicated than it is - it shouldn't take you more than 5-10 minutes to get Process Monitor up and running, and just another few to test in-game.

Step 3 - License/UAC: Agree to the license and, if you are on Vista or Windows 7, click through the User Account Control prompt to allow Process Monitor to run.

Step 4 - Filter: You need to specify the process name for Process Monitor to well...monitor. 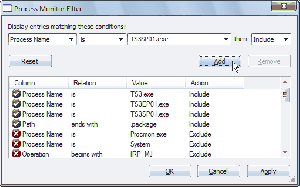 Add the .exe name to include in filter. Click the image for a full-size version.
Go to Filter > Filter > and Add a new condition to include the Process Name for the game you're testing with:

Notice the pattern to the filename? It will be the same for future EPs/SPs. If in doubt, you can verify by looking in the newly installed EP's/SP's \Game\Bin\ path for the .exe's exact filename.

Save filter for next time. Click the image for a full-size version.
Go to Filter > Save Filter > Enter a name > click OK. The next time you want to test the game using Process Monitor, Load this new filter.

Step 5 - Run the Game: Run The Sims 3 and allow it to fully load. Note: If you get an error when running the game: "A required security module cannot be activated. This program cannot be executed (5025)." ... then shut down Process Monitor, run the game, and ALT-TAB out of the game to run Process Monitor -after- the game is already loaded.

Step 8 - Examine Logs: In Process Monitor, go to the Tools menu > File Summary. It may take a few moments to do this. Maximize the "File Summary" window that comes up and click the By Extension tab. Click on the + sign by "package" to expand it, and expand the "Extension" column so you can see the file names. Then click on the "Total" column so it will sort by number of times accessed. 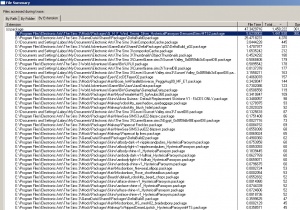 One problem file (highlighted), a Sims 2 hair recolour. Click the image for a full-size version.
Look at the top of the list for the files that were accessed most often. It's normal for to see game files here such as DeltaBuild0.package or simCompositorCache.package accessed quite often here. Ignore any of the game's usual files, and just look at any files located in Mods\Packages

It's normal for many custom files (especially things like default replacements or custom content being used on your sims) to have numbers 100+, and that's not a big deal. However, once you get into numbers in the multiple thousands or even millions, you've got a big problem! In the image to the right (click it for a full size version) you can see that one particular file has been accessed well over a million times!

In this case, it's a file from The Sims 2, which can't be read by The Sims 3 so it's getting stuck reading it over and over again. In testing, this one file made the difference between a game that loaded in under a minute to one that took over 5 minutes to load - a big difference for just one file!

If you don't have any problems... 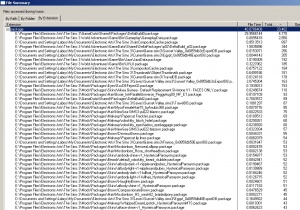 One might say "But it accessed one file 147 times!" but computers do things very quickly, and a few hundred times on custom files in a short test will not have a major performance impact. Tens and hundreds of thousands or millions are where you really get into trouble.

Step 9 - Remove Problem Files: Now that you have the filenames of any problem files, it's easy to go into your Mods\Packages folder and remove those files. It's best to cut and paste the files elsewhere (like to a folder on your Desktop) temporarily, delete your cache files, then try the game and Process Monitor again to see how your game's performance has improved.

What you do with the problem files after that is up to you, and what kind of problem they had in the first place. It may not be obvious which of these problems you have, when looking at a particular file - when in doubt, just delete it.

A possible hint is to get rid of any .package files that have a created/modified date earlier than June 2nd, 2009, as it is hard to make mods BEFORE a game is released. This is not a completely reliable solution though, as Sims 2 CCs are still in production and clocks can be set incorrectly.

Whenever you download a batch of new content, it's a good idea to run it through the Dashboard to check for problems first. Then, if everything's okay, add it to your game, run the game, and check that everything's okay with Process Monitor. You never know when you might have picked up a random Sims 2 file, or a corrupted Sims 3 file.

If you have a whole bunch of custom content .package files, and/or a slow computer, the sheer number of files can sometimes cause performance issues. Not only does the computer have to read the files, but it has to open and close lots of little files to get all the data it needs. This can cause some slowdown. It's better for performance to have your files combined, so it doesn't have to open and close so many different files.

Other Methods to Increase Performance

Once you've found the problem file(s), your game should be running much better. But there may still be some things you can do to help improve your game's performance. For more tips and tricks on making your game (and maybe your computer too) run faster and better, see: Improving Sims 3 Performance