Fairy sims are supernatural beings whose powers are associated with nature and trickery. Fairies have translucent wings and hover daintily instead of running, and they can also transform into tiny sprites the same color as their wings are. Fairy powers are visible from the toddler life stage. Fairies age about 5x slower than normal sims. Fairies can replenish their motives with the small (1x1) portable Fairy House and Fairy Castle, sleeping, drinking Pollen Punch, and hosting fairy parties. Fairy interactions with other fairies include bragging about tricks and about wing color, Fairy frolicking, playful pestering, talking about flight experience, talking about flowers, or telling a fairytales. Fairies can play tag with werewolves, and their plasma provides a positive moodlet to vampires who drink from them. In the portrait panel a fairy is denoted by a green border.

Fairies are affected by the various stages of the moon. At night fairies get an Energized by Moonlight moodlet from the moon. On moonless nights they have a negative moodlet due to craving moonlight. 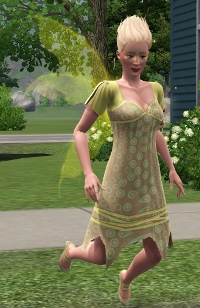 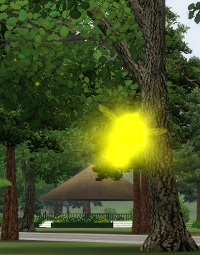 The above fairy as a tiny sprite. 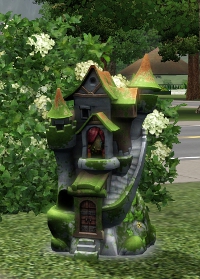 Probably the easiest option is to check the Elixer Consignment Store regularly for a Bottled Blessing of the Fae, which can also be made with the Alchemy skill although it requires a Red Toadstool, Sunstone, and Fairy Damsel to brew it.

Another option is to Search for Fairies at the Arboretum. This can unlock a chain of opportunities where you can become a fairy.

Fairies have a hidden skill that grants them certain abilities. There is a cost to every fairy ability that you use. The Magic Power meter tells you how much magic power your fairy has. If the meter is low, your fairy won't be able to use their powers until their meter replenishes. The Magic Power meter regenerates slowly over time, but fairies can replenish it faster by performing tasks in a Fairy House or by going on a ride on the Train Set. Because Fairy powers are a hidden skill you will only know their level by messages in the Information tab.

Fairies can automatically use the I Can Fly interaction on themselves, which makes them do a back flip in the air and increases their Fun motive. Non-fairies can gain this ability by asking a fairy they are close to give them some Fairy Dust. Fairy Dust cannot be sold and can only by used by the recipient, although the recipient can use the dust in their inventory on other sims. Likewise, Fairies with a level 1 Fairy Skill can use Flight of Felicity on other sims which grants them this power.

At level 5 fairies can use the Bloom interaction on plants to advance them to their next growth stage. If Bloom fails the plant will be engulfed in weeds. This ability makes fairies some of the best gardeners. Fairies can also talk to plants to raise their Social motive. Fairies can select the Greener Gardens lifetime wish which specifically calls for a certain number of Bloom interactions.

At level 10 fairies gain the ability to cast Inner Beauty on sims which will temporarily make mean and cruel sims ugly. Every time a recipient of this curse does a cruel interaction the timer on the curse resets itself, leaving them ugly for longer.

Fairies can cast Auras on themselves and other sims that boost skill gain to any nearby sim. Auras gradually drain a fairy's magic meter until it is empty, and they can be turned off from the same menu where they are turned on.

Like young sims with the Rebellious trait, Fairies can play tricks on other Sims. Fairy tricks are more supernatural in nature or appearance.

Once a Fairy has earned 30,000 Lifetime Happiness they can become King or Queen of the Fae. Fairies with this reward can change their wing design at will, and can also summon any other fairy that they know whenever they like.