In The Sims 3, there are a lot of collectible items found around town. These items can be fun to collect, and valuable too. A full guide to these gems (including how to make the best profits) is below.

You can find these collectibles in various ways:

Many precious and semi-precious stones (some real, some simaginary) can be collected for fun and profit. Some are more rare and valuable than others, and you can get them cut to enhance their beauty, and depending on the cut, their value too. Gems look lovely on display in your sims' homes.

Some of the rarest gems, Rainbow Gem and Pink Diamond, can be an almighty pain to find due to their extremely low spawn rates. Below are the spawn locations for those two rarest gems in Sunset Valley and for Pink Diamond in Twinbrook. You may have to wait quite a while for the gems to spawn there, but at least you know where to go to look. These may not be complete spawn locations - they may spawn in more locations than these.

If you just want to know the best cut to use per gem, just look at which one is bolded and shaded. Using that cut will, on average, give you the highest profit, though this may vary from one particular gem to another.

CS Note: All the values in the chart below were recalculated based on the uncut gem values in the original table, with the exception of the three new Supernatural stones which used values from the game files.

In addition to those listed above, there are several special types of gems:

You can also get it cut yourself into either a Spire or Heart cut; the spire cut costs 6500, and given 24 hrs will turn into a Large Spire Cut of its own accord. It is obtained reliably from breaking space rocks, maybe 2/day if one practices all day long. There should be spawn points and occasionally a merchant in egypt sells it. In both uncut and spire form, it periodically puts off a glowing green "splash" and has a soft "ping" sort of noise that goes off at the same time. In Large Spire Cut form it is incredibly valuable - upwards of 40,000 simoleons.

Your sims can also locate various rocks and ores scattered around your neighbourhood to collect and sell. These ores can be smelted by sending them off by mail. The next time the mail comes, your sims can check the mail and retrieve the ingots, which can then be sold or displayed. Ingots will stack on top of each other. 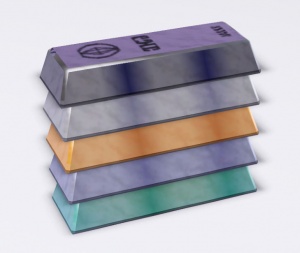 A stack of all five types of metals (from the base game) as ingots.

Though Mercury starts as an ore, when smelted it returns to you as a liquid in a vial (Mercury is a liquid at room temperature) rather than an ingot. Solid mercury is available through Transfiguration.

Compendium may be collected as a regular ore, or is available via Transfiguration. It cannot be purchased.

Supernovium may rarely be available for purchase at the relic merchant or collected as ore, but is usually obtained via Transfiguration. Placing at least 5 different types of metals for Transfiguration results in Supernovium ore.

Various space rocks in different sizes can be collected by your sims. These are assigned a base value, which may change or stay the same when your sim Analyzes the rocks. You can "Analyze All" to get the true value of all the rocks in a whole stack. Rocks can be placed on display or sold. They're the most boring of rocks, gems, and metals.

Values of the rocks found are calculated by the (weight of rock) x (multiplier), unsure of exact formula and price.