This tutorial will teach you how to create custom sliders by manipulating the sim skeleton. Such sliders can be used to manipulate the sim's body or face, and can be made for only one gender or for both. The process is very easy from a technical standpoint, but involves a lot of trial and error to fine-tune the slider values in order to get a good effect in-game, so be prepared to spend a lot of time loading up your game to test.

There are two types of sliders: bone-based sliders and GEOM-based sliders. They each work in a different way.

If you want to learn how to make GEOM-based sliders, I recommend CmarNYC's tutorial, Making a geom-based slider.

Before we start work, there's some preparation that needs to be done.

Firstly, download and install (or, in the case of Delphy's tools, unzip) the following programs:

If you already have Milkshape or Blender, you will find it useful to download the sim body meshes and skeletons, so you can easily pick out which bone you need to manipulate. If you don't have Milkshape or Blender, you can make a slider without, but it will be a more difficult process, as you'll have to guess which bone you want based on its name.

You can download the bodies here, courtesy of orangemittens. If the jaue.com links just give you a page of Japanese, try right-clicking the link instead and choosing "Save Content As", or similar.

Now for a very important step: remove any slider multiplier hacks you are using! You will need to determine the maximum and minimum values for your slider based on where the line is between "looks good" and "looks like an alien", and if you do that with a slider multiplier installed, you will end up with a slider whose real values are very restricted indeed. If you need a slider limit hack which can be used without a multiplier, try Twallan's MasterController @Nraas Industries.

You may also want to temporarily remove your other CC, to make loading times a little less painful.

If you want to create your slider without using Milkshape or Blender, skip this step and go straight to #Step 2: Creating the Package

If you are using Milkshape and you haven't worked with bones or skeletons before, open Milkshape and go to File -> Preferences. On the Misc tab, set Joint Size to 0.008000. Click Ok, and close and restart Milkshape.

Open one of the sim bodies you downloaded in either Milkshape or Blender. It doesn't make a huge difference which age/gender you use, although bear in mind that if you use the child, you'll be working on a smaller scale than you would with the adult. In Milkshape, go to the Joints tab and tick Show Skeleton.

Depending on which file you used, you should now see something like this: 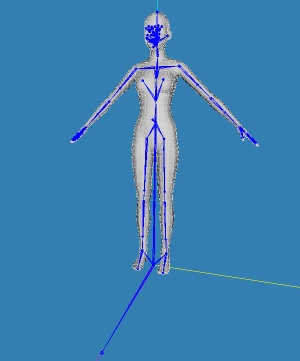 The grey, of course, is the sim, while the blue is the skeleton. Each little circle is a joint, and you can select these by, in Milkshape, going to the Model tab and picking Select and Joint. Depending on the type of slider you're making, you might find it useful to click the Anim button on the bottom right corner of the window, then select joints and move and rotate them, to see what the eventual effect will be. For the purposes of this tutorial, though, I want to scale a joint to alter the thickness of the sim's neck, and unfortunately it's not possible to preview joint scaling in Milkshape this way.

Using this skeleton, you can figure out which joint(s) you need to be working with. In the Joints tab is a list of all the sim's joints; double-click a joint to highlight it on the model. I'm going to scale the neck joint, so here it is selected: 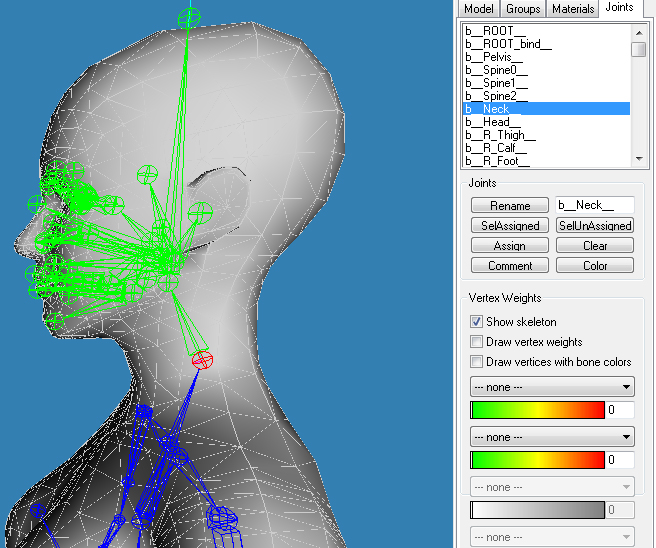 If you want to work on a joint in one of the areas which has a lot of joints packed into a very small space, such as the hands or face, you can tick "Draw vertices with bone colours" in the Joints tab. This will make it much easier for you to see which joint corresponds to which bit of the sim's body, as the body will be colour-coded based on which joint that part is attached to:

Once you've picked your joint, note down its name, and also note down the names of its closest child joints - any green joints which are directly connected to it. 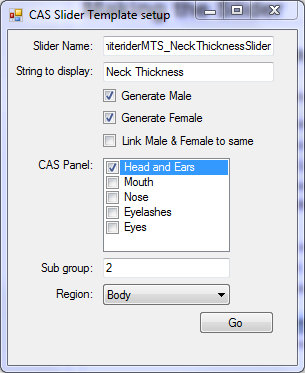 Next, open up the CAS Slider Template Creator program. This is a pretty simple program, which will generate a basic slider for you to edit. Fill out the various boxes.

The codes to each subgroup are:

Once you've filled out all the fields, click Go, and select a folder to save your new slider file to.

Now, find your .package file and open it in S3PE. If this is your first time using S3PE, go to the bottom of the window and make sure "Names" and Tags" are ticked. You should now see a list of resources.

There will be two BOND (short for BoneDelta) resources for each gender, unless you ticked Link Male and Female. The default value for your slider - that is, essentially, 0 - will be right in the middle of the slider in CAS. The <YourSliderName><Gender>Right BOND file controls what happens when the slider is dragged to the right, and the <YourSliderName><Gender>Left BOND controls what happens when the slider is dragged left. You can be quite creative in how you use this, but for now, we're going to stick to Right scales up and Left scales down. 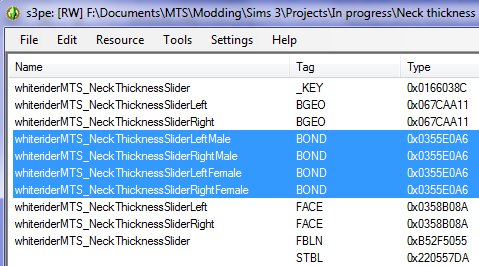 Select all the BOND resources, right-click them, and Export -> To file.

Pick a gender to start with - I'll pick female - and a direction - I'll pick Right, since scaling up is easier than scaling down. To begin with, you'll be making very rough changes, narrowing down the values you want to use largely by trial and error and guesswork. Open the relevant .bonedelta file in Delphy's BoneDelta Editor.

The first thing to do is to select the Head entry, and change it to the joint we want to work with - you noted down the name earlier. Select that joint in the list, and set the various numbers: Offset is movement, Scale is scale, and for an explanation of Quaternion, see the "Advanced stuff" section of CMarNYC's Pet body slider tutorial. As a guide, you will probably want all your numbers to be between -1 and 1, as higher or lower numbers will create very extreme transformations in-game.

Next, remember the green joints? We said that altering a joint alters all its children, and ordinarily, we don't want that - I've set my bonedelta to scale the neck by a factor of 0.2 in the X and Z axis, I certainly don't want the whole head to do that. So, click Add Entry at the bottom of the list, and create a new entry for each of your direct child joints: we need to scale the head down when we scale the neck up (or vice versa), so that the two changes cancel each other out for the head.

My values end up looking like this, for FemaleRight: 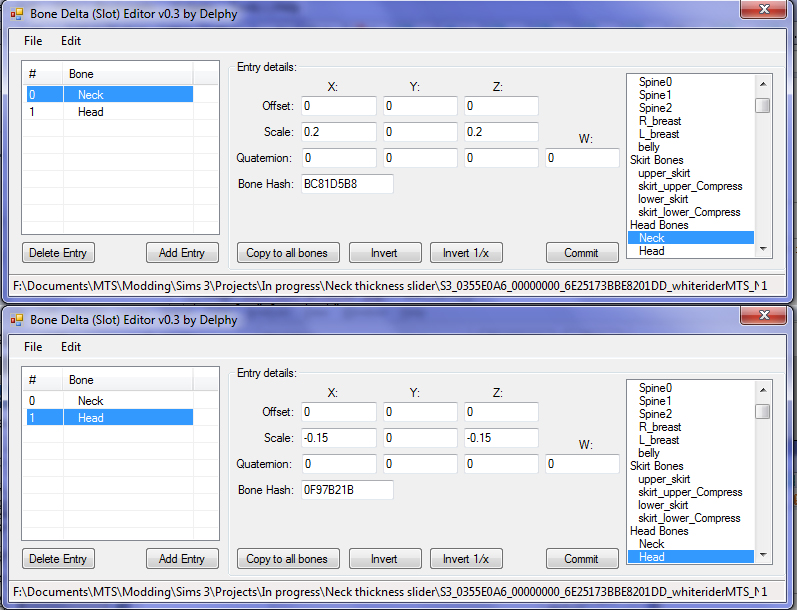 Remember that every time you change the numbers for one joint, you need to click Commit - if you switch to a different joint without clicking Commit, your changes to the previous joint will be lost!

Do the same for the Left version of whichever gender you're currently working with, remembering to invert everything, and save both .bonedeltas.

Once you've finished messing with the .bonedelta files, go back into S3PE, and select the BOND resources which correspond to the .bonedeltas you've edited. Right click them and hit Replace - make sure you replace them with the right .bonedelta, or you'll end up with some very broken results! Save your .package file.

You're now ready to pop the .package file in Mods/Packages, and go in-game to see what happens. Your first few attempts will probably end up like this: 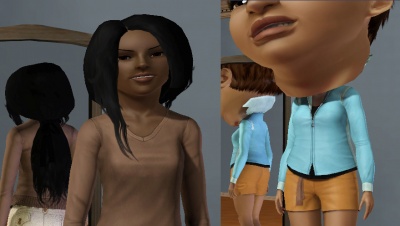 Don't worry. ;) Just repeat steps 4 and 5, tweaking the values as you go, until you end up with what you want - a slider whose maximum and minimum values make sense, and which doesn't cause any other body parts to change size or shape when it's used. Then, repeat the process for the other gender.

Eventually, you'll end up with something more like this: 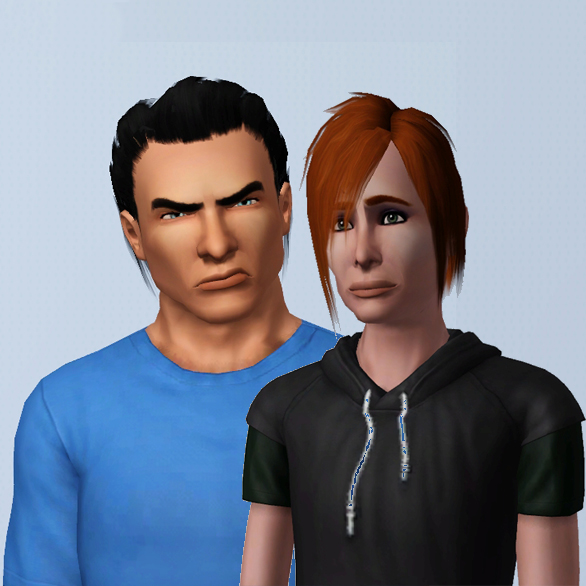 ...and a shiny new sticker on your profile!

If you found this article useful, please remember to click