The Twins from Matrix 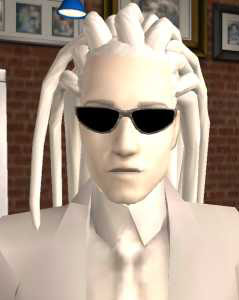 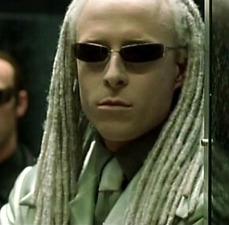 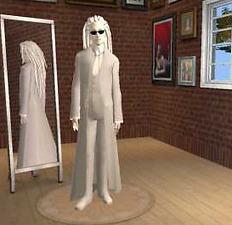 I've tried to make Twin #1 and Twin #2 from the Matrix.
But I didn't know which eye colour they had becuase the always have shades... so, because they are white I thought first red eyes, because maybe they were albinos, but then I thought again and came up with the idea that they maybe have non-colourful eyes too, so I took the eyes I've made for my Van Helsing female-vampire.

Well anyway, I did them when I had my "Matrix period". I downloaded everything to know about my favorite caracters (The Twins & Agent Smith). So well here are the Twins (Well it's just one... but they are so alike... awrgh, you get the picture).

Quick facts:
The Twins are the two silvery henchmen of The Merovingian who can become translucent and move through solid objects.
They are also the 'ghosts' the Oracle explains about while talking to Neo before the 'Burly Brawl'. In other words, their abilities as programs (becoming translucent and moving through objects) were still usable in exile.
The twins received some criticism due to the fact they portray albinos according to the evil albino archetype. However, with their ability to become incorporeal, it is far more likely that they are intended to represent ghosts, and their white appearance is an allusion to a ghostly image.

Hair: Made by Compulsive D, it's a reacolour by me and I got the mesh from sims2sisters (site is closed) - but you can get the mesh from here, it's called "long dread male"

Eyes: A Maxis orginal, recolour by me

Skin: A Maxis orginal, recolour by me

Clothes: It's a recolour I made from a Severus Snape I downloaded from Sappiresims

The Shades: I got from MTS2, they're called Neo MatrixShades, and you can find them here

Lipstick: A Maxis orginal, recolour by me

Eyebrows: A Maxis orginal, recolour by me

Everything is included! (except the meshes)


If you like it? Why not hit the thank you button?

Thanks to everyone of you who made this possible, you can't tell how thankfull I am. Thanks again.

And please don't use my work without asking!