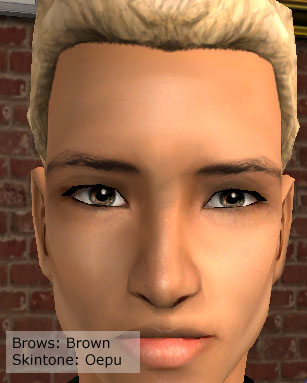 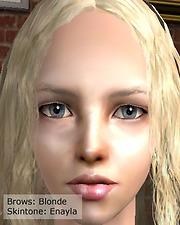 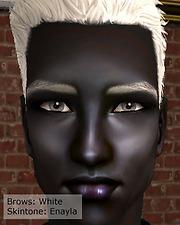 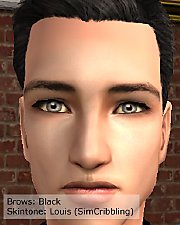 4,047 Downloads Quick download 1,179 Thanks  Thanks 48 Favourited 50,131 Views
Picked Upload!   This is a picked upload! It showcases some of the best talent and creativity available on MTS and in the community.

Whee, okay, so, if you haven't already seen JoanneDyer's gorgeous eye collection get thee hence to that link. I saw them and immediately went, "Oooooooooh," both at the eyes, and those awesome eyebrows. So I went a huntin' and tracked the eyebrows to her sim, Victor. I downloaded him and... ack, the brows are part of the skintone! Luckily, JoanneDyer gave me permission to take them off of the skintone and make them into brows that any sim can wear. Huzzah! So, first of all, a huge thanks to JoanneDyer for the permission to modify and post them. Go check out her stuff. She'll probably kill me if I don't mention that the brows are Kevin Zeger's, and that he's really hot and stuff (although I'm not really sure who he is... *ducks*).

The converted brows are a little bit different, not quite as highlighty as the originals, as it was quite a task making them so they'd work right on all kinds of skintones, not just light. Some of the colours look a little odd on certain skintones... the dark colours pretty much cover the brows on Louis's new skintones (better for males than females) and look pretty good on most of the other skintones I tried them with. The screenshots show a variety of skintones so you can get an idea of how they'll look with different stuff. I have this horrible obsession with drow, and pretty male sims with white hair and eyebrows, so, um, yeah, there's those too.

Archive Information
This is a Maxis Recolour which means that it is a recolour of an item that already exists in your game. Please check the Expansion pack requirements to see which game pack it recolours.
Archive: VictorBrows.rar
File: Brows_JDBlack_HystericalParoxysm-DemusedSims.package Makeup