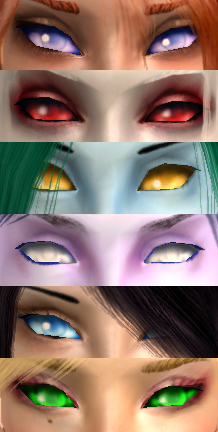 4,751 Downloads 529 Thanks  Thanks 52 Favourited 49,652 Views
Picked Upload!   This is a picked upload! It showcases some of the best talent and creativity available on MTS and in the community.

Created by KamiKurayami
View Policy / About Me View all Downloads
Uploaded: 22nd Aug 2008 at 10:44 PM
My first eye set. :x I know they arn't the greatest out there, and I probably did something wrong, but I thought I should share these beauties with you. ^-^

This all started when I realized I couldn't find any decent eyes for any of my Sim versions of my WoW related characters. So I made them. None of the eyes are a solid color (even the silver night elf eyes) mainly because those eyes just look miserable.

First off, before I get any kind of comments about it, here's some lore as to why there's so many colors (all of this is gathered from http://www.wowwiki.com/Portal:Main ) :

Concerning High Elves:
"Their eyes are incredibly intense in color, seeming to glow with an inner light. While many high elves have blue or green eyes (ex. Alleria) (ToD 117), violet and red are not unheard of. (WoWRPG 36 )"

As a note, I did not do green versions of the high elf eyes because they're waaay too close to blood elf eyes.

"Among night elves, gold-colored eyes, as opposed to the traditional silver, are a sign of inherent druidic potential. Among the class-obsessed night elves who lived prior to the War of the Ancients, gold eyes were rare, and thus viewed as a sign of underlying greatness. Queen Azshara and Illidan Stormrage, both extremely powerful sorcerers, had golden eyes. The night elves became vastly more egalitarian since the War's end, abandoning their former obsession with bloodlines, and thus, gold eyes are now far more common. In addition, druidism spread throughout night elven society, and many night elves develop gold eyes after birth if they practice the art.

Though gold eyes are a sign that the individual has a natural ability for druidic magic, it does not mean that all gold-eyed night elves become druids, or that silver-eyed night elves are unable. Malfurion Stormrage himself was born with silver eyes, and developed golden eyes only after studying druid magic. His own brother, though born with golden eyes, lacked the patience to succeed in the art."

In other words, it's entirely possible for female night elves to have golden eyes or even for males to have silver. Please, by all means do whatever with them!

Now, for the good stuff:

As a note where the red one is concerned, I like to use the red eyes for Dark Rangers, since they tend to have eyes like that. X3

I'm also aware my nelfs don't have pointed ears like the high elves... it's because this set is part of a WoW-based collection I'm working on and I havn't gotten to skins yet. :P

I use a LOT of custom content for my Sims, and unfortunately a lot of it gets lost to the wayside due to me not being able to find the original creators. I'll put due credit to those that I know for certain, however.

If you have any other questions or anything, feel free to ask. ^^

Also, BIG thanks to the people here on MTS2!
Files Need help with downloading or installing content? Click here!

I'm an amateur digital artist who's first love in Warcraft, followed closely by the Sims... which is why I've decided to share custom Warcraft related Sims content. ^^