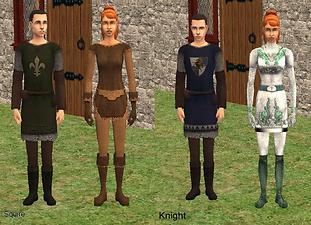 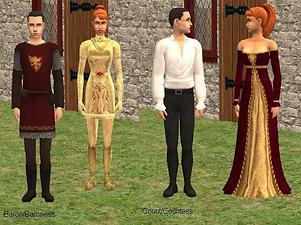 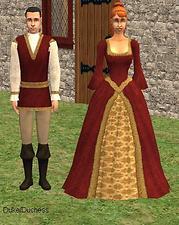 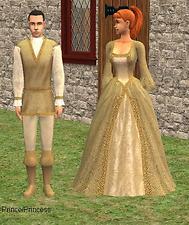 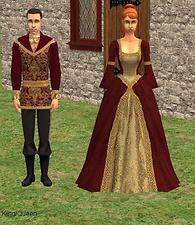 Picked Upload! This is a picked upload! It showcases some of the best talent and creativity available on MTS and in the community.
Hello. I've visited and downloaded LOTS of stuff from this site for quite a while now... and now it's time I gave something back.

Here it is... my Medieval Career for Adults and Teens.

This career comes with custom icon, custom clothing, and all chance cards complete. It also has its own GUID so it will not interfere with the ingame careers. It is also base game compatable as well as EP ready.

In this career, a Sim can start as a Peasant and make it all the way up to the King. However, medieval times were a very cutthroat time, so even if he makes it to the top, the wrong choice could wind up dethroning him. So make your choices carefully.

I also have to admit that my career does lean a bit towards fantasy. But that's to make the career more interesting.

Also, the Medieval Outfit files in the downloads are actually Vagrant's Custom Uniform files, which are required for the Sims to be able to change into their work clothes. As for the meshes and textures themselves, which will also be required (otherwise, the Sim will just change into his everyday outfit), I have chosen not to include them as some are from Sim-Ages.com, a paysite. However, the rest are from here on MTS2 and I have provided the appropriate links to where they are, and attached pics for reference. As for the Sim-Ages outfits, I cannot provide links, but I did list where they are on the site, as well as provide pics, for your convienence.

Career Levels and their appropriate clothing:

You are the lowest rank in medieval society… one of the “commoners” who represent the bulk of the population. You mainly work in the fields for the local Lord. However, if you work hard, you might be able to buy a small bit of land to start your own farm with.

The clothes I chose for this level for are the adult and teen Peasant under "Medieval Men" and "Medieval Women" available at The Dark Project. Meshes are the "tig-am-tunic-short-alpha-boots" for the adult male, "tig-tm-tunic-short-alpha-boots" for the teen male, "tig-af-layeredmedieval" for the adult female, and "tig-tm-layeredmedieval" for the teen female. All four meshes are by Tiggerypum and the textures are by zoej.

You have managed to eek out enough money to buy your own farm. It is small by comparison, but the land is still yours. Now you can start supplying your goods to the kingdom and maybe hire some helping hands. Continue to work hard and keep those crops coming… and maybe you’ll get the King’s attention.

For the males I used the adult Brown Tunic and the teen Brown Vest from the "For The Lords 1" outfits at A Midsummer Night's Dream. Meshes are Tiggerypum's "amtunicpants" and "tmtunicpants" for the adult and teen males, and the same "layeredmedieval" meshes from Peasant for the adult and teen females. Textures for the males are by SixStringSlim. For the females, I used the Working dresses under "Medieval Women" at The Dark Project. The adult is the Tavern Cook dress (AF_TavernCookiamliz) and the teen is the Seamstress dress (TF_Seamstressiamliz). Textures are by Iamliz13.

War! A neighboring kingdom is about to invade! The King needs troops, and you have been selected to fight for the honor of the kingdom. Prove your bravery in battle… not to mention stay alive… and you will earn the right to apprentice with the King’s elite.

I used zoej's 4 Knight's Outfits for the males from Yeoman to Baron. For this, I used the white outfit for the adult and teen. Meshes are Tiggerypum's short alpha boots for adult and teen (same ones for Peasant) available at The Dark Project. For the women, I used the light outfit from sherabim's female leather medieval clothing. For the teen, I had to use the TS2 Body Shop to map her textures onto reisuru's Teen Harajuku Inspired Outfit, with her permission, of course. This texture file will be included with the Teen Career, however, you'll need to go to the previous link for the mesh. As for the adult, you'll need the adult version of the mesh here, however, sherabim includes the mesh in her downloads.

One of the King’s Knights has taken notice of your bravery and has requested to the King that you become his apprentice. You’ll have to prepare his horse and carry his shield for him, but if you do a good job, and observe your master in battle, your training will soon be complete.

Used zoej's green Knight's adult outfit for the male on this one. Also used sherabim's dark female leather medieval outfit for the woman. Links to meshes and textures for both: see Yeoman.

After proving yourself to your master, both in skill and loyalty, the King has granted you Knighthood. Your former fellow commoners now address you with “Sir” before your name, and you wear your armor and title with pride. But do not rest on your laurels. Keep on fighting and bring honor to the kingdom, and someday you may get to do more than just fight.
(The female version has "Dame" in place of "Sir".)

zoej's blue Knight's adult outfit for the man. (See Yeoman for meshes and textures again.) For the woman, I used Elfmaid's Eleven Armour: Mystic Mithril, which uses a Maxis mesh from the base game.

Because of your fighting ability and your strategic brilliance, you are now in command of the King's troops... and have achieved noble rank. The troops and peasantry now formally call you "Lord." The King now depends on you to bring victory to the kingdom and end this war. A monumental accomplishment to be sure, but, once again, do not rest on your laurels. If you perform above and beyond for the King, you might be given an even greater title. (The female version has "Lady" in place of "Lord")

For special services rendered, the King has granted you this honorific title. Your duties are now to maintain the rule of law, and organize the conscripts of the King’s armies when there is another invasion. If you prove yourself in these duties, the King may grant you even greater prestige… and greater responsibility.

This is where I start using the Sim-Ages.com clothing files. Unfortunately, it is a paysite. However, two of the outfits are free ones. (Also, I hear that there is a way around that.) So you will have to acquire them there if you don't have them already. The Count is the Charming Rogue outfit from the Freebies category, page 3, and The Countess is the Medieval Fantasy burgandy dress in the Ladies category, page 2. Meshes will be provided with each texture.

You've achieved the highest rank of the nobility! The King has granted you dominion over one of his provinces… not to mention a special place in the King’s court.

The Duke is the Royal Velvet Ruby Red color available in the Men category, page 1, and the Duchess is the Tudor Inspired red dress in Freebies, page 11.

The King has been unable to produce an heir. In light of this terrible epiphany, the King has decided to name you as his heir. By royal decree, you are now the Crown Prince (or Princess) of the Kingdom. All you have to do now is wait…

You are now the ruling monarch! Remember, though… monarchies, like any form of government, work best when the relationship with the people is symbiotic. Just as you depend on the people’s crops and taxes, they rely on you to rule with a just and fair hand, as well as defend them from any invasions from neighboring kingdoms. Keep this in mind, and there shouldn’t be any rebellions to unseat you from your throne.

The King is the red Courtly Attire outfit in Mens, page 6, and finally, the Queen is the red Royal Velvet dress in Ladies, page 4.


The teen career levels are basically the same as the first three levels of the adult career, though the teen Farmer is called a Farm Hand.


I hope everyone really enjoys this career. Any praise and/or constructive criticism is welcome.


Special thanks to everyone I've previously mentioned who created the meshes and textures I've used for this career.

UPDATE!!! As I was waiting for this to be approved, FennShysa had released his Carpool Replacements for Medieval/Fantasy/Rustic Neighborhoods mod. This proved to be a godsend, since I tried using Hexameter's vehicles for this, but for some reason, even after following all the instructions in this tutorial, the vehicles kept trying to park in the driveway instead of picking the Sims up for work. So I was forced to abandon that. However, after trying out the mod, I decided to redo the vehicle assignments for some of the career levels. So I strongly recommend using FennShysa's mod with this career. So to get this slight improvement, please redownload the adult career.

SECOND UPDATE: Astena has made me aware of a little problem with my career file. When I created this career, I used a cloned Science career that came with the tutorial I used to learned how to make careers. However, what I failed to do was account for the other language translations in the career file. So, if this career is used in any non-English versions, it will show up as "Science" and the descriptive text and chance cards will come out as translated versions of the Science career. However, I am unfortunately not very good at other languages (yep, I'm a typical American "yank", although I have considered learning Spanish), so I altered the file so that it is "English default". That way, while it will mainly be English, it should show up in non-English versions as "Medieval" and not "Science". The new file will overwrite the old one, but no other alterations have been made. It should still work with the Teen career. Also, Sim-Ages.com has closed down, so the clothing files for the last four career levels are no longer available through the main site. However, I still have the clothing files myself, and I am currently seeking permission from the administrators to upload them.

Additional Credits:
Extra special thanks goes to Rct2mad for allowing me to base this career on his own, Superfly for his tutorials, and Vagrant for his custom uniform files. And if there's anyone I left out, please let me know so I can give you your just credit.