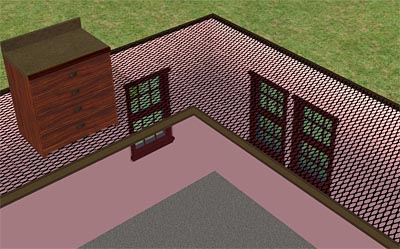 207 Thanks  Thanks     11 Favourited
I know my texture is not very good, but I hope this is something like what gnohmon was asking for.

And guess what? It does not crash HomeCrafter Plus, and shadows cast on it do not make the grate texture disappear.

The method I used on this one is definitely better than on the previous transparent tiles, because not only does HCP not crash on load with the tile installed, it also won't crash if you try to clone it. The clone will lose transparency and won't be very useful, but at least HCP doesn't just give up and close. So I'll be updating the previous ones to use this method as soon as possible.

I'll also be putting together a mini-tutorial of the stuff I've learned in making these. It's not hard... easier than doing an object recolor once you have the right Material Description format to start with, which I'll upload. But it may take me a few days to get that posted. I've been working on a really time-consuming project with Quaxi and Numenor, and I don't want to delay their work because I'm off doing something else.

As always, let me know if you have any problems... and don't try putting it on the ground floor unless you like neon teal shadows.