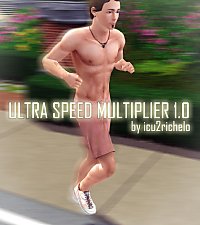 Created by icu2richelo
View Policy / About Me View all Downloads
Uploaded: 11th Jul 2009 at 4:25 AM
Updated: 16th Aug 2009 at 9:54 PM
Ever since I started playing the game, I've been annoyed by the slow, slow speed. I mean they're snail-paced. Watching my sims sleep, fish, or work is uneventful. I just wished speeds were faster! EA gave us a patch, to fix the speed settings, but this still wasn't adequate!

So without further ado, fellow Simmers, I give you:

This mod comes in Three flavors!

The Heavy Version provides the largest increase in speed. Perform any action, faster than a pack of llamas.

I've separated each version into separate .rar's so you can download the version that suits your needs!

Update: I apologize to all those who use this mod without results. I'm still unsure as to why it does not work for everyone, or works for some, and then stops working... It may have something to do with the code requiring certain degree limits of which I am not currently aware of.

All this mod does is change the speed value for Triple Speed and Ultra Speed to a higher value. Apparently changing these values does not have an effect on the actual in-game time... So I think there's more work to be done here. If anyone else would like to make a Game Speed mod that works properly, then I place the job in your hands.

I do not have all the time in world to be working on getting this mod tweaked properly, because I'm currently trying to get my Business Degree. As you can imagine most of my freetime is taken up by homework and research. If anyone has bountiful time to work on a better mod, please do so.

AwesomeMod may be compatible with this mod. Some users have suggested deleting your cache files before installing this mod, and before starting the game. Other users experienced game crashes. If you install this with AwesomeMod, you're on your own.

WARNING: Do not use with other Core mods. Only download one version of this mod! Using this mod with other core mods can cause the game to crash. And as other mods suggest, installing multiple versions of this mod can cause retinal damage, maybe even SCBS (Sugar-Coated Bunny Syndrome). Don't be a bunny.