All Fish are Buyable *Updated for Ambitions - redownload* 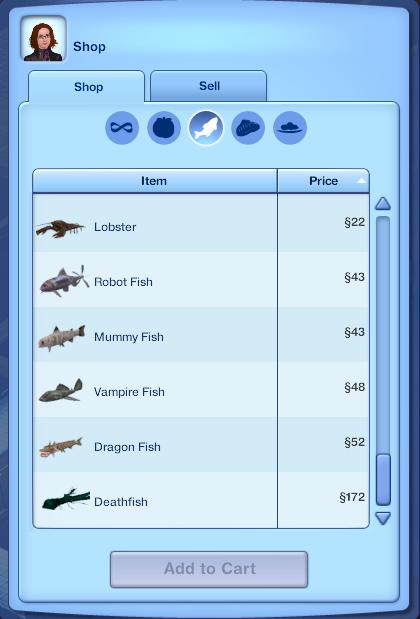 Created by Jenesis View Policy / About Me View Downloads Home


*****THIS MOD HAS BEEN UPDATED very kindly by anak_ponti to work with Late Night. See his post in the thread for the download.******


Along the lines of my Buyable WA Fruit mod, here is a similar thing for fish! This mod has the same idea, to make it easier to get fish without spending ages dredging up different types of bait. The release of World Adventures brought new fish (and fruit!) for the new locations, and since sims only have a limited time on their holidays, this mod makes things easier (and at Home as well). There is now only one flavour - the overwhelming majority of people wanted all fish to be buyable anywhere, so that's the only flavour available now. If you want to tailor this mod to your own taste lookup the S3PE tutorial, XML modding is simple.

Installation: You must have World Adventures and Ambitions installed to use this mod (it doesn't seem to matter whether you have HELS or not). If this is the first mod you're going to install for Ambitions you need to do a little file arranging to get the mod to install properly, instructions can be found on the Install Instructions page.


Other Buyables: SimsMX has made a mod (or pair of mods, really) that make the nectar maker, shower in a can, cameras, training dummy etc etc. buyable in Buy Mode. I will not be making a mod to make those items buyable in a shop as his mod is a much better idea and much better implemented. Go download his mod if you want to be able to buy the new equipment at home!

Simply put, this mod makes all the Home neighbourhood fish and all location-specific fish buyable at any food store in the world, even those that are not normally buyable (i.e. you'd have to go fishing to catch them). The following fish will be buyable in any Food/Grocery shop in the world:
Minnow, Jellyfish, Red Herring, Tragic Clownfish, Siamese Catfish, Piranha, Blowfish, Black Goldfish, Shark, Angelfish, Vampire Fish, Robot Fish, Deathfish, Mummyfish, Frog, Snail, Dragon Fish, Ochiba Koi and Tancho Koi.


Fish that are already buyable (Salmon, Tuna and so on) will remain buyable. Remember that buying a non-buyable fish will not give credit for "Catch X amount of fish Y" opportunities, but a good use is to buy ten of the desired fish, then click a pond and "Stock" it with the fish. Your Sim can then catch an unlimited number of that fish from the pond (according to skill level of course).

I have playtested this mod extensively and found no problems, however if you find a problem please post.

My policy on my creations: You can use anything of mine, as long as a link is given to the original thread, and it stays on MTS2. You don't have to ask my permission, but a PM as an FYI is appreciated :)