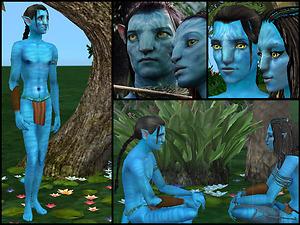 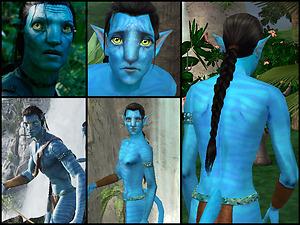 22,418 Downloads 1,117 Thanks  Thanks 117 Favourited 170,359 Views
Picked Upload!   This is a picked upload! It showcases some of the best talent and creativity available on MTS and in the community.

Created by sugarandcaffeine
View Policy / About Me View all Downloads
Uploaded: 12th Jan 2010 at 9:36 PM
Updated: 3rd Aug 2010 at 1:26 AM
The ex-marine Jake Sully as his Na’vi Avatar, played by Sam Worthington in James Cameron's Avatar. Because he has a blend of human and Na’vi DNA, Jake has eyebrows and smaller eyes than the indigenous Na’vi. Neytiri can be found here.

*You must download the following meshes for him to show up properly*
Cat tail by atreya
Punk Junky Native outfit by BlooM
Also, make sure to download the hair mesh in the download files for this thread as it is not included with the sim.
*Please use Clean Installer to avoid "missing ep" issues as suggested in the installation instructions tab above^*
or if it still does not work properly with Clean Installer (or you own a mac and can't use clean installer), the extracted files are available on mediafire here. 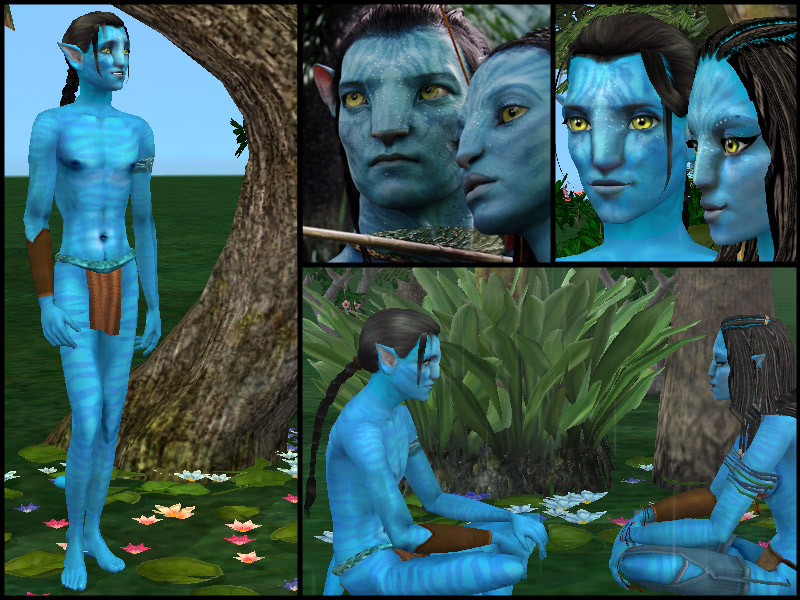 Na'vi skintone 2 for all ages uses skin tone by Oepu as a base, eye & lip textures by Bruno, and body stripe texture from Synapicsim's Na‘vi sims. The Na'vi tail also uses the stripe texture from Synapicsim's Na‘vi sims. This skin tone has different face textures (for all ages/genders) than the one included with Neytiri so you can have more Na’vi variety if you decide to mate them

Jake's hair is a new(ish) mesh that is a combination of Nouk’s side braid and male ponytail, frankensteined in Milkshape. It is animated and for ages teen through elder. This is my first attempt at fiddling with hair meshing, so the braid may bend a little funny for some in-game animations. Feel free to share/recolor/modify the mesh as long as it stays only on free sites and credit is given to Nouk and sugarandcaffeine. Thank you so much Nouk for your open policy!

Eyebrows are based off those by HystericalParoxysm here, just alpha edited a bit.

Accessory included
elf ear #1 mesh by Ren(Simcribbling) fixed so it will not flash blue if you have pets ep.

Thank you to all the creators that made him possible!

Additional Credits:
In screenshots
Poses by Synapticsim. Waterfall shower by Marvine.
Other Information

Archive: MH Noukbased braid mesh.zip
File: MESH_sugarandcaffeine_MH_Noukbased_braid.package Mesh
Jake Sully by sugarandcaffeine.zip: Archive contains one or more files that are added twice (once in .package form and once in SimsPack form) (error 105)

This download requires one or more meshes to work properly. Please check the Description tab for information about the meshes needed, then download them below:
Also Thanked - Users who thanked this download also thanked:
Billie Eilish Sim
by sims2ultralover5
Alli
by cherbear
[3to2] Hiro Hamada (Big Hero 6)
by WatermelonSandal
Princess Zelda - Sim, dress, and hair
by GnatGoSplat
Game of Thrones: Jon Snow (Kit Harington)
by Vulrien
Game of Thrones: Daenerys Targaryen (Emilia Clarke)
by Vulrien
Jayanti
by AdeLanaSP
Arthenna
by Dragonflysparkles
"Sissi - Die junge Kaiserin" - Romy Schneider
by AdeLanaSP
Katarina from League of Legends (requested)
by nyctopile
Back to top

I don't play or even own Sims 2 anymore (nor will I play Sims 3) so I can't take requests and probably won't be around here much at all anymore.

That said, do whatever you like with my creations, just keep it free and the policy open! You don't even need to request permission.