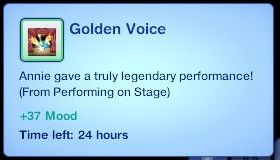 This is a simple XML Tuning mod which makes it easier (or harder) for your sims to perform Legendary shows, even when you let them do the entire show autonomously.

Important Details
Compatibility
Flavors
Use only one Flavor!

Autonomous Gigs
Removes penalties for Autonomous and Repeat interactions. All other factors are unchanged.

Better Gigs
This flavor will increase Gig performance for all performers, but especially for performers at the max career level, and for performers who have the Engaging (Lifetime Happiness Reward) and Natural Born Performer traits.
Harder Gigs
This mod makes it harder for a show to have a legendary rating by upping the penalties for autonomous and repeat interactions and by increasing the threshold for legendary performances.
More Legendary Gigs
All career levels should have an easier time performing legendary gigs with this flavor.
If you would like your own flavor, please ask.

See: Game Help:TS3 CC Basicswiki for a full guide!
Also Thanked - Users who thanked this download also thanked:
Simport Rewards Unlocked
by velocitygrass
[05/12] Jenesis' All Buyable Fish/Books/Fruits Mods (Compatible with Patch 1.63-1.67)
by anak_ponti
Add Any Lot Size (edited 01/16/2014)
by velocitygrass
No Intro with Maxis logo
by ellacharmed
Treasure Box *Compatible with 1.67*
by treeag
Create-a-Sim: Adjustable Female Breast sliders
by Tashiketh
Store All Fish and Harvestables at Once *Compatible with 1.67*
by treeag
Faster Nectar Making and/or More Bottles
by gesimz
No Mosaic Patch 1.22 to 1.67 edited 01/16/2014
by velocitygrass
Moar Interactions
by Buzzler

As far as my policies go, you can do whatever you want with my mods or anything else I create, just stay away from paysites and the Exchange. Edit, tune, change, update, etc. my mods however you like. You may even upload them somewhere else under your own name, I really don't care.

And my blog: Nona's Sims

Finally, check out my Mod Index to get an overview of all of my mods.

Please note, I am not taking requests.