by iCad Posted 10th Nov 2013 at 1:38 PM
10 Comments / replies (Who?) - 1 Feedback Posts, 9 Thanks Posts
Picked Upload! This is a picked upload! It showcases some of the best talent and creativity available on MTS and in the community.
Everyone and their dog has made damask wallpaper for this game, it seems, yet when I needed one, I couldn't find precisely what I needed. At least not quickly enough for my patience to run out with sifting through all the gothy/grungy stuff I didn't want.

So...I just went ahead and made what I wanted. I ended up with 14 different colors, even though I only needed two or three of them. Perhaps someone else will find use for them as well.

Here's one of the colors on a wall in inside lighting but with the ceiling turned off so that the crown mold (Which is Maxis's and, in fact, the kick mold on the bottom is the same thing cunningly flipped over) doesn't get chopped off: 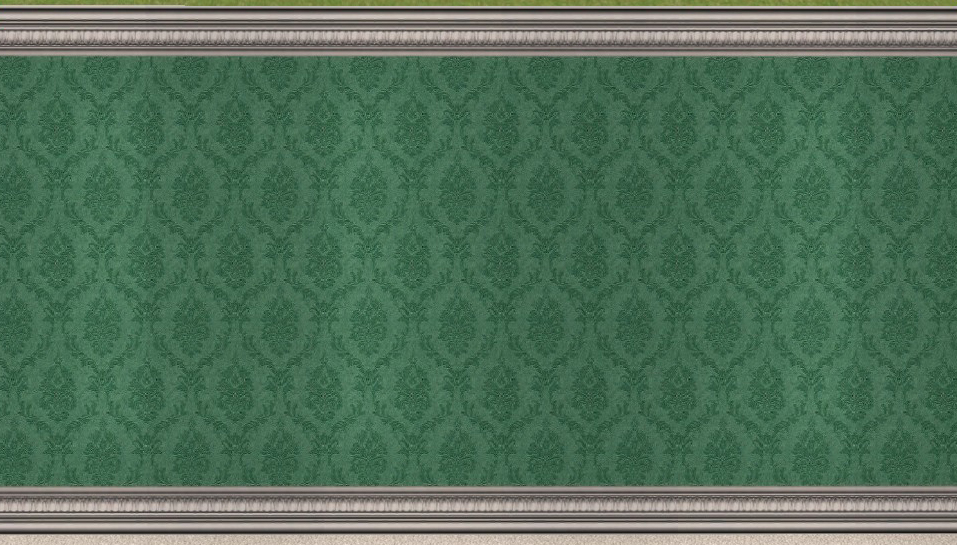 Here's the same color with the ceiling turned on, so choppity-chop if you have AL like I do: 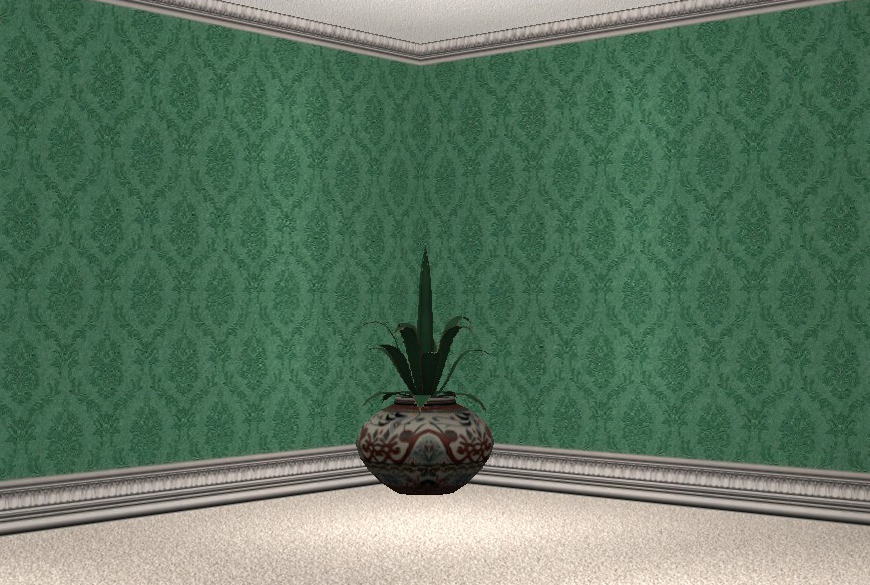 And here are all the colors on the same wall as the pics above but zoomed in closer to show more detail: 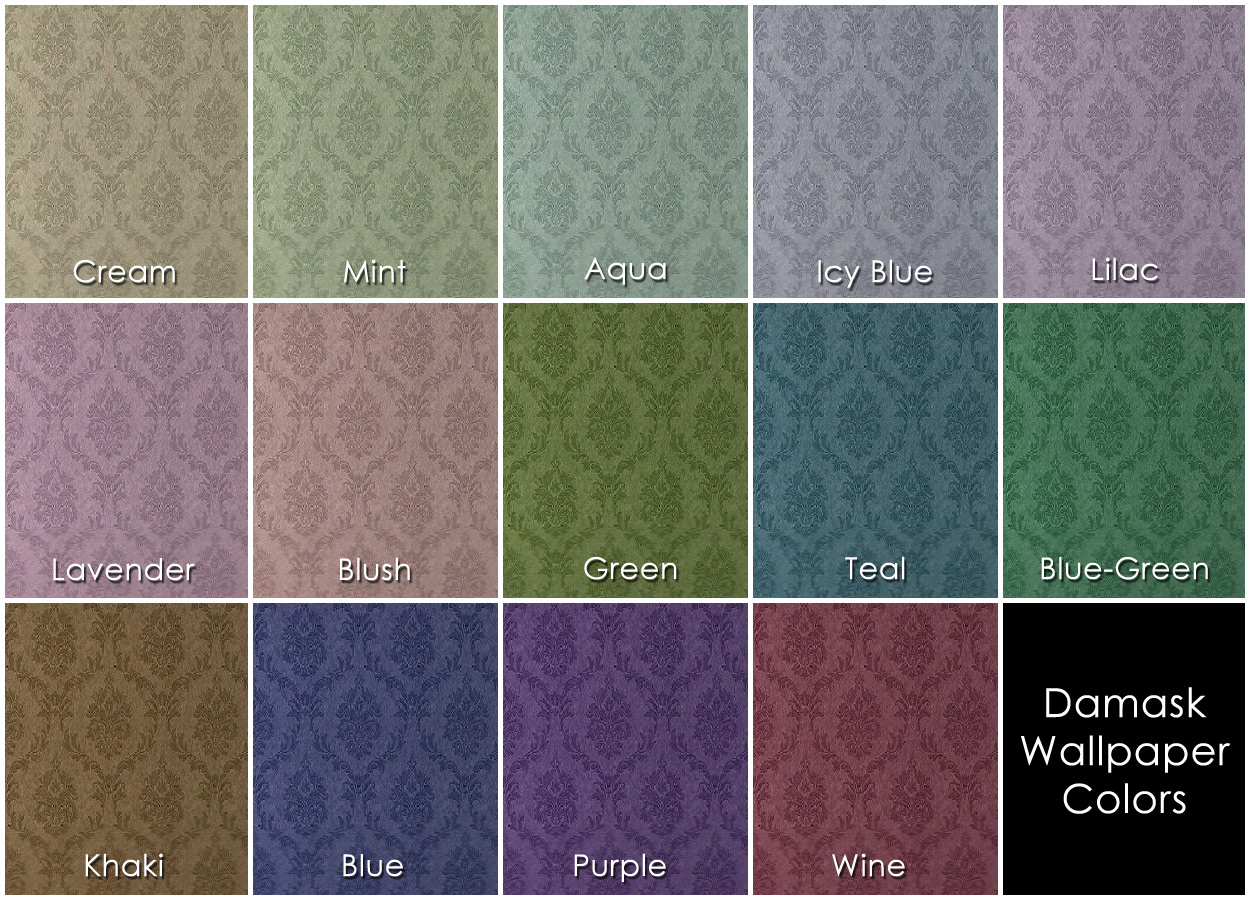 As you can see, they're all either pastels or sort-of jewel tones but they're all kind of washed-out as well, which was deliberate on my part because I wanted them sort of faded and worn-looking but not all the way to grungy.

At some point, if I need them, I might make more pieces of these, like with the crown/kick removed and maybe some with chair rail added and/or versions with beadboard or coffered wainscoting or something like that, but for now this is all I've got. So if you need yet more damask walls in your game...Well, here you go.

They're Compressorized already, for all that it only knocks a couple of kilobytes off the file size. The color swatch is included in the zip, to help with weeding out colors you don't want. You'll find them in the Wallpaper category in your game, and they cost...uh...uh...Crap, I forget, and I'm not feeling like firing up Homecrafter to check. Pretty sure it's around $10 or $12, though. Hey, damask is expensive, kids!

Finally, program credits, since I've never done them before but am told that it would be polite:
Photoshop CS2 because that's the version that doesn't suck all the RAM out of this little netbook.
Homecrafter, but I DON'T thank its lame-o file naming that I always have to fix. *eye roll*
Jfade's Compressorizer, which is awesomeness.
And in this case I'm pretty sure the damask pattern I used is from The Inspiration Gallery, but don't quote me on that because I did a tour around the Internet in search of pre-tiled damask patterns so that I didn't have to screw around with doing it myself. I nabbed a bunch from various places and didn't note down what came from where. Whoops.
Tags: #damask, #wallpaper, #faded, #pastel, #jewel tone, #molding

Back to download view
10 Comments / Replies (Who?) - 9 Thanks Posts
Hide Thanks Posts for this thread (Show only feedback)
Karen Lorraine
Constant Contestant
staff: moderator THANKS POST

These are lovely iCad, thank you

Thank you! I love walls with a decent price. Environment scores can be near 100% before adding anything else. Keeps down on cramming too much decor trying to bring it up and space used for the necessary items. My sims love small cozy houses.
RelenaiSims
Test Subject
THANKS POST

It's funny because I loathe green but I love the shade in the thumbnail! Definitely using these, they're so pretty.
Ecca
Lab Assistant
THANKS POST
#5

Thank you, iCad! =)
I can never have too much damask...and these are so pretty! xD
iCad

Yay, comments. Thank you all.

@ Duine: I, too, like some more expensive walls, not really for Environment scores, which I really don't care about personally, but because I like expensive things to be...expensive. Like, the car prices in the game. You can buy a car for $950, but buying a closet costs $1000? The hell? That said, this reminds me that I need to fire up the game or Homecrafter and edit this post with the actual price of these....

@ RelenaiSims: What's this? You hate green? That's...that's... That's sacrilege! Well, OK, maybe not. But green, all shades of it, is my favorite color. I just can't imagine not liking it.

I'm mostly found on (and mostly upload to) Tumblr these days because, alas, there are only 24 hours in a day.
Muh Simblr! | An index of my downloads on Tumblr.
YleniaHouse
Test Subject
THANKS POST
#7

I have been wanting some damask wallpaper. Thanks for making some and making it available.
gazania
Mad Poster
THANKS POST

Because if you're trying to create an older house, my usual bright shades just aren't doing the trick, and for some reason, I don't have too many soft and subtle wallpaper prints. And Maxis is a little boring or tries to be whimsical, and I don't want whimsical when I'm hoping for stately ...