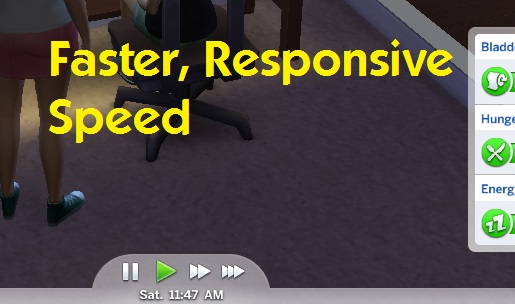 Created by simmythesim
View Policy / About Me View all Downloads
Uploaded: 25th May 2015 at 2:55 AM
Updated: 29th May 2015 at 12:50 PM
Faster, Responsive Speed aka Faster Speed 3 v2 which is a replacement for that mod, speeds up the ultra speed! However unlike that mod, Faster, Responsive Speed tries to speed up gameplay while minimizing time rolling backwards. What this mod does is that the less sims on the lot and surrounding area, the faster time runs. However when more sims are loaded, time slows down to accommodate more sims.
TL:DR

Take the following code for example:

The Slow version changes the code to
suggested_speed = 15 - sims
final_speed = max(suggested_speed, 4)
which means that for every sim in the world the speed gets reduced by one.

Conflicts
Will conflict with any mod that modifies clock.py

Bugs
I've tested pretty extensively in my game, but if time keeps rolling back for you comment in the comments section.


Suggested Mod:
I'd suggest my Less Walkbys mod as it reduces the amount of sims walking past your house, therefore the speed gains will be increased

Additional Credits:
Aren and Scumbumbo for helping me with this mod a lot. Major kudos to both of them.
Kuree for S4pe
velocitygrass for Sims4xmlextractor
Files Need help with downloading or installing content? Click here!