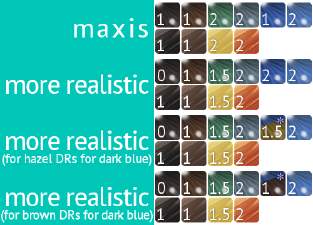 31,608 Downloads 476 Thanks  Thanks 188 Favourited 83,424 Views
Picked Upload!   This is a picked upload! It showcases some of the best talent and creativity available on MTS and in the community.

Created by Nopke View Policy / About Me View all Downloads  Tumblr

This mod makes hair and eye color genetics more realistic. It's based on a simplified real life model of genetics in which there are two genes of eye color (a brown/non-brown gene and a green/blue gene) and two genes of hair color (a dark/blonde gene and a non-red/red tone gene). In the game, there is one gene for eye color and one for hair color, so the mod is an approximation of an approximation [sic] of real life genetics, which is much more complicated.

There are also two other versions for people who use nonstandard default replacements for dark blue eyes:Use only one version of the mod. simNopke-moreRealisticGenetics is also a version. 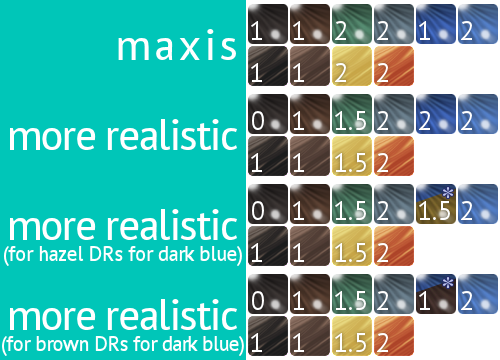 Rikkulidea has written how the game genetics works, check it out if you want to know something more about it.

Conflicts
Despite a conflict, this mod can be used with Creature fixes by Pescado but must loads after it.
I advise against using this mod with mods changing genetics, visibility in the catalog, or "townification" of blonde hair, or alien, green, or dark blue eyes. If you really want to keep those mods though, make sure they load after this mod.

Use only one version of this mod.

Support me on Ko-fi
Support Mod The Sims