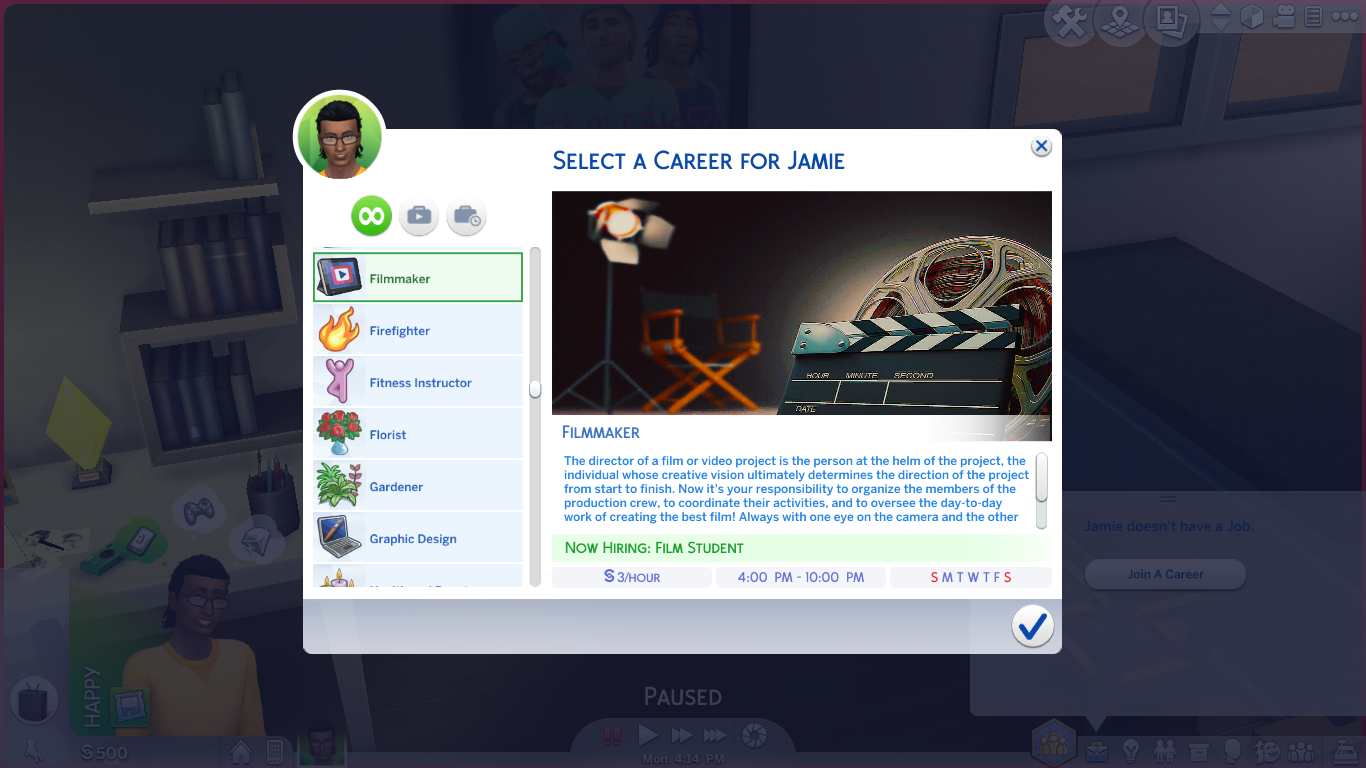 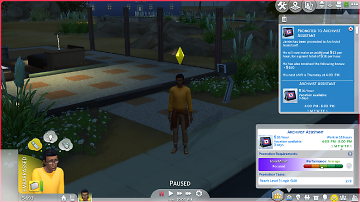 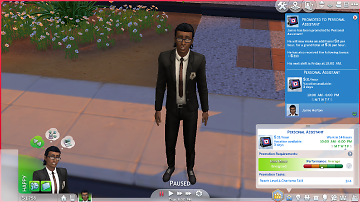 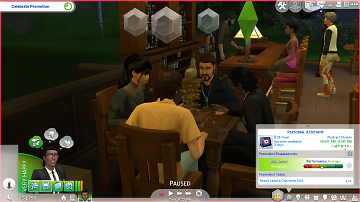 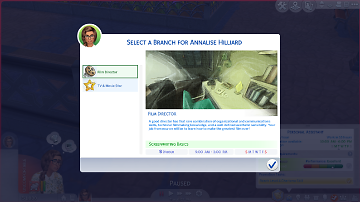 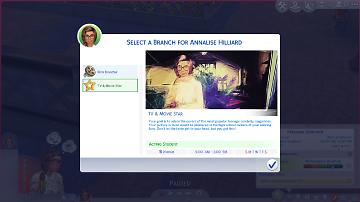 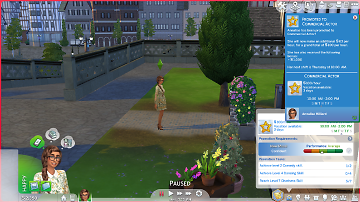 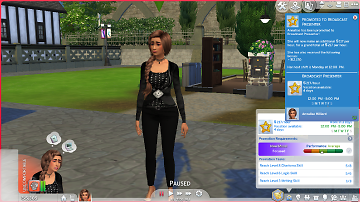 The director of a film or video project is the person at the helm of the project, the individual whose creative vision ultimately determines the direction of the project from start to finish. Now it's your responsibility to organize the members of the production crew, to coordinate their activities, and to oversee the day-to-day work of creating the best film! Always with one eye on the camera and the other on the budget.

Here I am with a new career! This career has been a project of mine for the last week or so. I had to do some research for me to get an idea of what I really wanted in this. Don't even let me start on the film versus movie thing.. in this case I used "film" in the career track that is about creating, making films/movies and in the other track I used the world "movie" so it suggests a more international career. Hollywood anyone?

This all started because I really wanted a cinematography career for my sims but I wasn't satisfied with just that. So the first track is the result from my "research adventure" and the second track is like a side option for those sims that prefer to be on the screens instead of being behind the camera lens!

The career is enabled for teens, young adults, adults and elders. I made it like this thinking that I like to encourage my teen sims into start preparing for the world out there early on. The first levels are for your teen sim to work on their skills and so they can know what to expect when they go into this career path.

This is the perfect career for all your future Film Directors or Actors/Actresses sims!

You need to have Get Together for it, because of the dancing skill in the 2nd track.

You'll need to put all files from the zip in your mods folder, except the "Neia_Careers_Commons.package" if you already have it.

PS: I'm going to be working on a Psychology Career next and I also got a request for a FBI career.
If you have any suggestions/requests or just some cool ideas please feel free to message me!

Who else is super excited for Seasons?!

Film Student
3$/h, 4PM-10PM, 0.30 PTO
Work Days: M T W T F --
Ideal Mood: Focused
Skills: Logic 2 Charisma 2
Many leading filmmakers say their enduring and unerring passion for cinematography started at a young age, as did their work. Whether making short films with friends and classmates or filming high school events, experience counts for everything in this industry. Even films created on a smartphone and edited on a laptop can convey your raw talent and eye for cinematography.

Archivist Assistant
16$/h, 4PM-8PM, 0.20 PTO
Work Days: M T W T F --
Ideal Mood: Focused
Skills: Logic 3
A professionally qualified archivist is in charge of an archive. For now you are just an assistant but The Director says that this might help guide you in the way of your career path. You will help maintain the contents of the archive and assist with the day to day running of it. Be prepared to spend countless hours cataloguing and indexing file, sorting through the hundreds of completed films and on-going projects in our archive and always making records available to employees and visitors!

Programme Researcher
23$/h, 4PM-8PM, 0.20 PTO
Work Days: M T W T F --
Ideal Mood: Confident
Skills: Programming 2
You thought the hundred of records you made before were useless? Well, wait for the work that waits for you as a Programme Researcher now. You will be responsible to respond to enquiries from other researchers and members of the public who want to use our archive material. Please always remember to recommend our own projects and films please! Other tasks might include research of thematics, generating programme ideas and helping to organise presentations, displays and exhibitions.

Personal Assistant
31$/h, 10AM-6PM, 0.20 PTO
Work Days: M T W T F --
Ideal Mood: Energized
Skills: Charisma 4
The Director says you have natural talent and so you are now shadowing his work for a while! You will be working closely with the Director, usually on a one-to-one basis for the main purpose of performing administrative functions. Your main responsibility is helping the Director make best use his time.


A good director has that rare combination of organizational and communications skills, technical filmmaking knowledge, and a well-defined aesthetic sensibility. Your job from now on will be to learn how to make the greatest film ever!


Screenwriting Basics
9$/h, 9AM-3PM, 0.20 PTO
Work Days: M T W T F --
Ideal Mood: Inspired
Skills: Writing 2 Photography 3
Even if a student already enjoys writing, screenwriting is a significantly different form of artistic expression. This class reviews the principles of ancient theatre before moving into a study of past and present dramatic writing. Students discuss what makes a good story before learning how to present it in script form.

Camera Operator
29$/h, 6AM-2PM, 0.20 PTO
Work Days: M T W - F S -
Ideal Mood: Energized
Skills: Handiness 2 Photography 2 Painting 2
Someone in the staff told you that camera operators need to be detail oriented. After you learned how to use all those tips you read on how to maintain and extend your equipment life, you will be working towards finding the best possible ways to capture every sound, image and word playing in front of you.

Location Manager
42$/h, 9AM-5PM, 0.30 PTO
Work Days: M T - - - S S
Ideal Mood: Playful
Skills: Charisma 5 Logic 5
The location manager is the member of the film crew responsible for finding and securing locations to be used, obtaining all fire, police and other governmental permits, and coordinating the logistics for the production to complete its work. You think it's a boring job after working with scripts and props and actors to achieve the best film but you do need to know how to do all this stuff if you ever want to be able to manage your own film production.

Casting Director
135$/h, 10AM-6PM, 0.25 PTO
Work Days: M T - - F S S
Ideal Mood: Confident
Skills: Charisma 6
Producers and directors may have a lot to say about who gets the staring roles in films, but it’s the job of the Casting Director to pull together the complete cast for most films. You will be looking out for talent now, setting up and overseeing auditions, on the way to select the best possible cast, with or without the assistance of a director or a producer.

Cinematographer
217$/h, 9AM-5PM, 0.30 PTO
Work Days: M T W T F - -
Ideal Mood: Confident
Skills: Logic 8 Writing 3 Handiness 4 Photography 3
The cinematographer, also often called a director of photography is often the person entrusted by the director to stand behind the camera and take the actual shots. Nothing new for you, however, on bigger shoots, you may be tasked with coordinating a larger group of camera operators, lighting technicians, and other essential personnel. Now you are essentially The Director’s right-hand man, a technically proficient camera specialist who shares his artistic vision and also bring your own creativity to the job as well.

Film Director
336$/h, 7AM-3PM, 0.30 PTO
Work Days: M T - - - S S
Ideal Mood: Happy
Skills: None
Now you've done it. The student surpassed the master! You are now sitting in the Director's Chair directing your crew and cast so you can create the best picture in motion. As a director you'll contribute to all the creative elements of a production and will be responsible for shaping them into a cohesive film. You will be working now towards producing quality work and building a positive industry reputation!


Your goal is to adorn the covers of the most popular teenage celebrity magazines. Your picture is to no doubt be plastered in the high school lockers of your adoring fans. Don't let the fame get to your head, but you got this!


Acting Student
9$/h, 9AM-3PM, 0.20 PTO
Work Days: M T W T F --
Ideal Mood: Inspired
Skills: Logic 4 Dancing 2 Charisma 5 Fitness 2
You just started but you are already sure that this is what you want to do for the rest of your life! In Drama School they will train you to be a professional actor able to perform on stages and do camera-based work. Be sure to listen to all the tips on how to look comfortable and natural in front of the camera or audience so that one day you'll be able to express your passion for the art in big screens or huge theatres.

Supporting Role Actor
37$/h, 9AM-5PM, 0.20 PTO
Work Days: M T W T - - -
Ideal Mood: Energized
Skills: Charisma 6 Fitness 4
You tried to audition for the lead actor role but it seems like you were not ready yet. Oh well! This movie might not be about you and you will only be mentioned enough times to be more than just a minor character.. but at least your name will be there when the final credits roll and can proudly tell your mom you are finally in a movie!

Broadcast Presenter
217$/h, 12PM-5PM, 0.25 PTO
Work Days: M T W T F - -
Ideal Mood: Focused
Skills: Charisma 8 Logic 6 Writing 3
You have confidence, charisma and a good speaking voice, so you thought you could try your hand in the creative role of broadcast presenting. It's a bit nerve-wracking at times but you are now the public face, or voice, of some of the most well-known programmes broadcasted on television. You'll work on a variety of platforms including national, regional, satellite and cable television. Your role is to inform the audience by presenting information or entertainment in an accessible but attractive way. Go for it!

Leading Actor
400$/h, 8AM-2PM, 0.30 PTO
Work Days: M T - - F S -
Ideal Mood: Confident
Skills: Charisma 9 Fitness 6
Now is your turn! You were afraid to be rejected again but!.... Cue the tear-jerking music as your Television Father imparts an important life-lesson to you. The role of a television actor is to be likeable and believable; and you definitely mastered that! Now you can truly understand and feel the experiences of the character you are representing. Your mom is telling everyone that you are a A-List Actor now!

SimAcademy Award Winner
680$/h, 18PM-0AM, 0.30 PTO
Work Days: - - - - F S S
Ideal Mood: Happy
Skills: None
You worked all your life for this. You are finally recognized for your excellence in cinematic achievements! Now it's the time to thank all the people that guided you along your way, don't forget anyone; and maybe try to make a joke that will be remembered forever in the history of the SimAcademy!

Career Picture from The Nation article

Some of the Career titles and descriptions are from the Film Career part-time job from The Sims 3
And from Learn How To Become: A Filmmaker