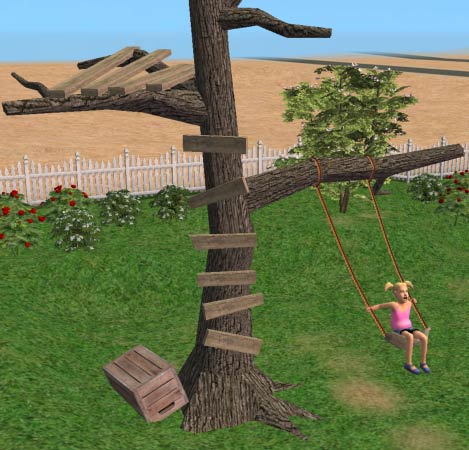 1,183 Thanks  Thanks     84 Favourited
This is a Maxis Recolour which means that it is a recolour of an item that already exists in your game. Please check the Expansion pack requirements to see which game pack it recolours.

Picked Upload! This is a picked upload! It showcases some of the best talent and creativity available on MTS and in the community.
***READ BEFORE DOWNLOADING***

I needed an attention-getter to prevent redundant comments later.

I'm a big fan of houses and furnishings with "character". Plain-vanilla stuff just doesn't tickle my fancy, so I converted the boring swingset into this old tree swing. However, currently there is no way of creating a copy of the original swingset and making it into a functional new object. Due to either the Object Workshop, SimPE, or the original Maxis coding of the swingset, cloning a swingset results in game lockups, so I had to make this replace the default swingset.

Note also that the tree itself does not take up part of the object's footprint, and consequently is "invisible" to Sims. This means that they will walk through the tree as if it didn't exist (if they're going around it in that direction). If you have swingsets already in your neighborhood, they will probably not change unless you go into buy mode and buy this swingset. Once it's on the same lot as an original swingset the game will change the model for the old one to the tree.

All that being said, this is a fully-functional swingset, and the tree even shakes and bends when the Sims use it!

Regarding the file size: A little on the large side because I had to replace the textures with newer larger ones.

**EDIT** I have had a report that this does not work if you only have The Sims 2 and no expansions. I have changed the compatibility until either someone tells me different, or I can change the object. It's possible that the swing was "patched" by the Uni expansion and is no longer compatible with the base game.