Building Domes for Your Space Colony (No Custom Content Required!)
So, you've decided that one planet isn't enough for your Sims anymore, and they're going to start spreading out into the cosmos? Fantastic! Any self-respecting civilization will eventually reach that point, and the quicker they act on it, the better it is for all of that civilization's members! (...hint-hint Earthlings...

Hold on a second though- you didn't expect that you could just go flying off into space and start building things the same way on some remote planet that you would back in the suburbs of SimCity, did you? Of course not- other planets can have harsh environments that no Sim could survive on for very long without some kind of protective shell. To that end, SimNation's space industries have begun to develop plans for protective domes, to allow SimKind's spacefaring pioneers to live safely on other planets for extended periods of time. If you've decided that you want to build such a dome for your off-world habitat, then read on, intrepid space pioneer!

The first thing we'll need for our dome is a foundation- something to anchor it to the planet’s surface. To allow for more flexibility when sculpting craters and ridges around the dome as we're landscaping the lot later, we want an 8-click high foundation, so we'll start by making a 4-click hill to begin the foundation on. Once we've got our first foundation tile placed, we can go in and flatten the hill back out. 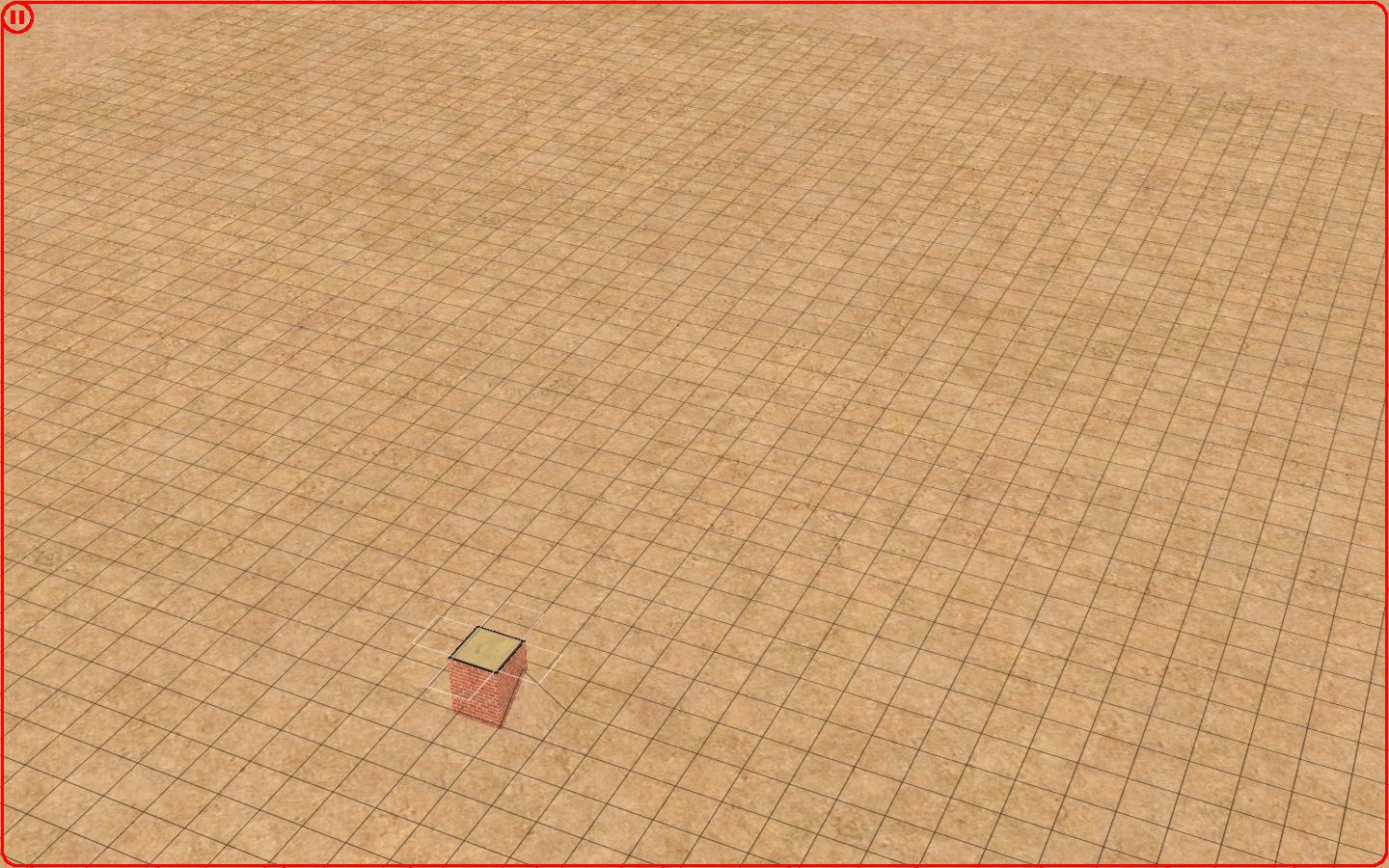 There are many different dome foundation shapes that we can choose from once you're familiar with the process, but the most basic is a round dome, and for that, we're going to need an octagonal foundation. For this tutorial, we'll be building a dome with a usable space inside that's bordered by an octagon of 10 tiles on the standard edges, and 8 on the diagonal ones. You can make a dome of whatever size you want in the future, but always be sure that the lengths of ALL the edges are even numbers in length (you'll see why later). The foundation will also need to be at least one tile wide on all sides (so that we can change the ground level inside the dome without distorting it horribly on the outside), which means that the outer edge of the foundation will be an octagon 12 tiles long on the regular faces, and 8 tiles long on the diagonal ones. We'll go ahead and build an octagon, leaving at least one tile open somewhere for an eventual access point (you do want your Sims to actually be able to get inside the dome, right? 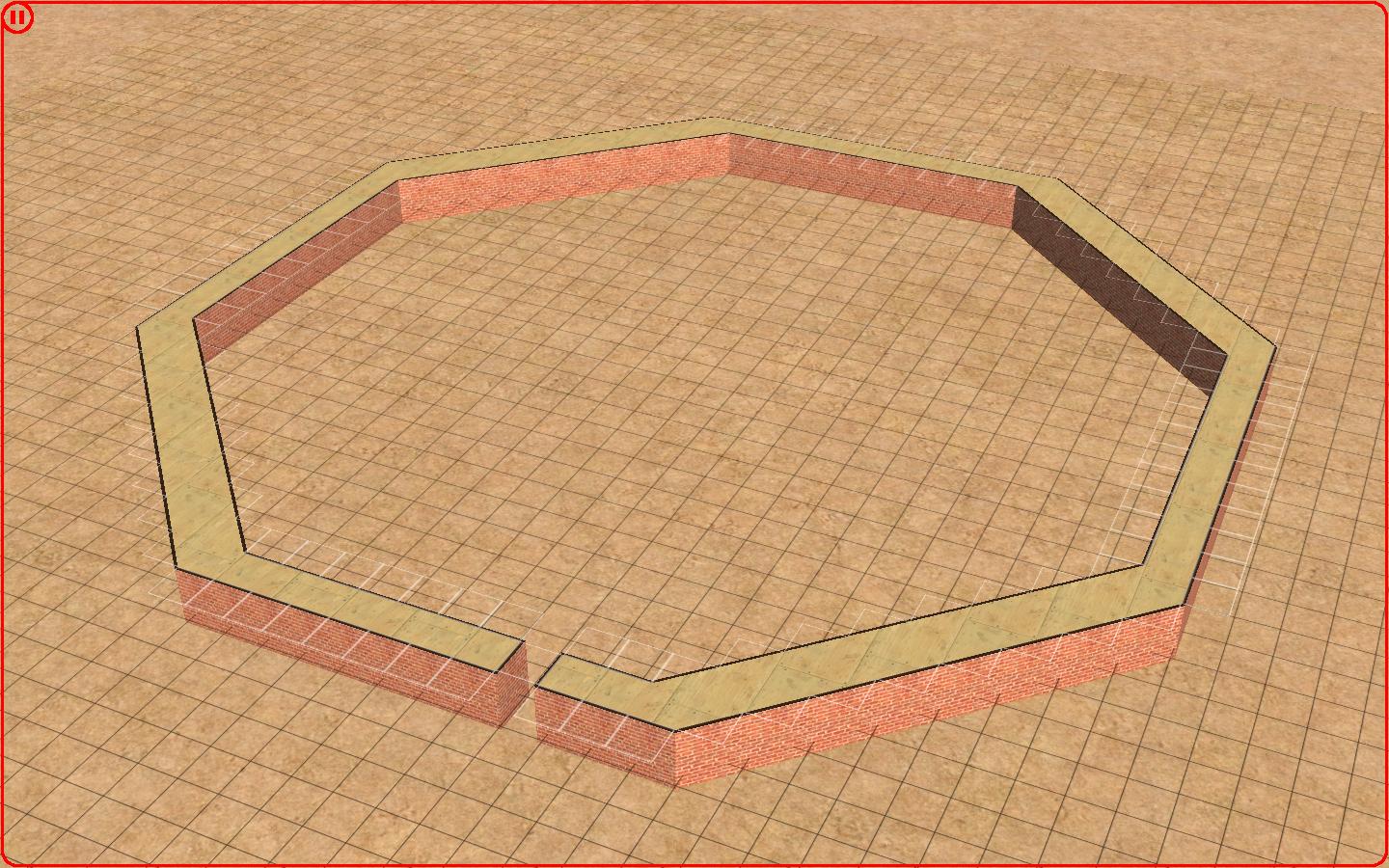 Lower the terrain inside the octagon until the inner wall is a standard height of 16-clicks. 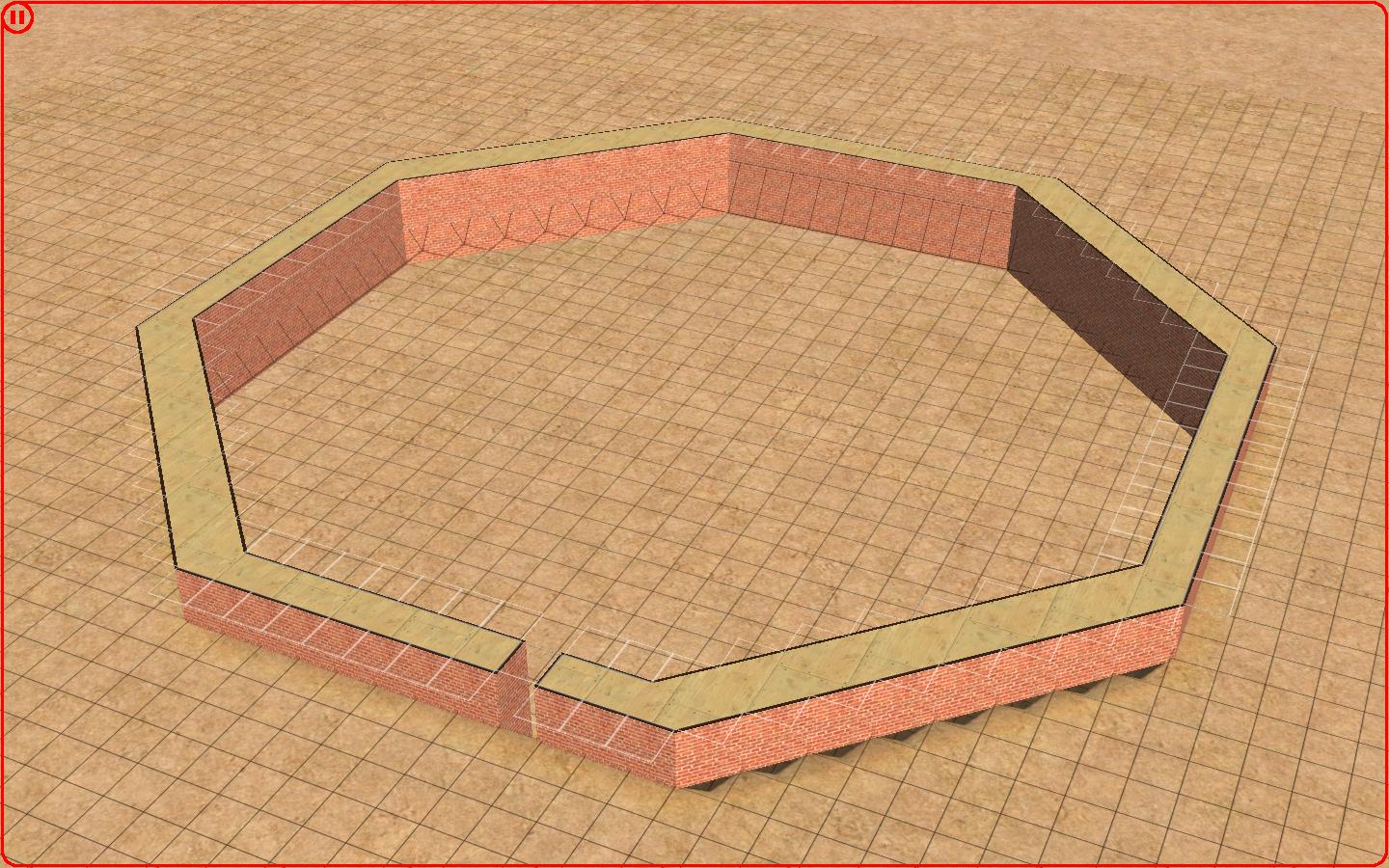 Once we've got our octagon foundation finished, the next step is creating a dummy level above it. (This step is also where we have to make our first major decision- the number of dummy levels we create at this point will be the number of "usable" levels we'll have inside the dome once it's finished. Before we rush into making 10 dummy levels though, bear in mind that each dummy level also raises the dome itself, and having it too high can look... odd. Plus, having more than two stories worth of space inside the dome means making a really tall dome, which again can look... odd.) For this tutorial, we’ll just make one usable level, which means one dummy level. Create another octagon using regular walls, along the inside edge of the top of our foundation level, completely enclosing the space this time. 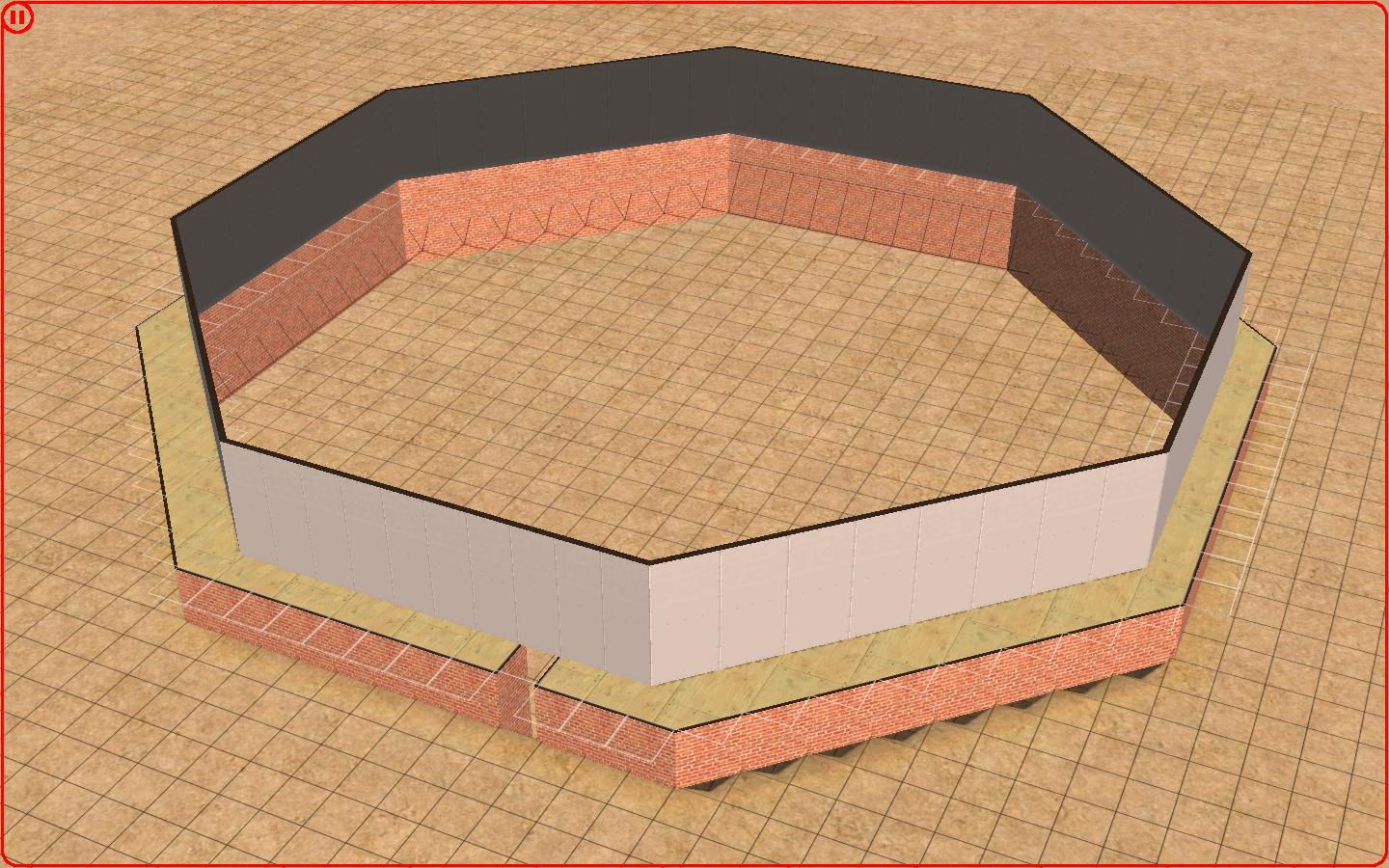 Outside the foundation, we'll dig a hole so that a 2-story column will have its top only 4 clicks above the top of our foundation. With this example lot, that means a 20-click-deep hole. Place a floor tile (It doesn’t matter what pattern, we'll eventually delete it- I'm choosing white because a.) It's easier to see other things on, and b.) It looks better in the meantime) on top of that column. 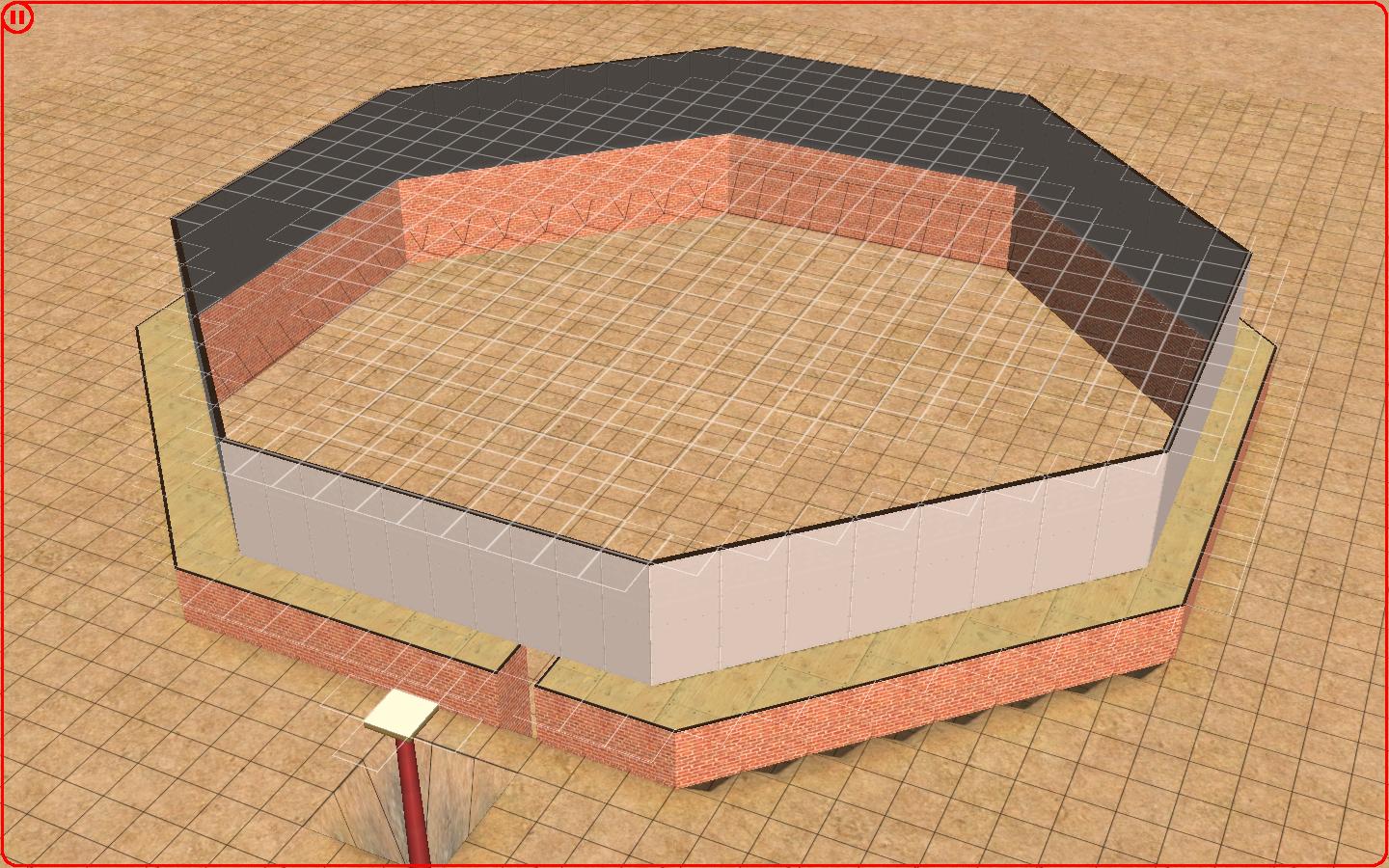 Turn on CFE by opening the cheat window and typing "boolprop constrainfloorelevation false", then click+drag the floor tile across your dummy level. If you've typed the cheat correctly, the dummy level will go from the standard height of 16 clicks down to the 4-click height we want. Continue dragging floor tiles until the entire dummy level is the proper height, and covered by floor tiles. Turn off the cheat by typing "boolprop constrainfloorelevation true", and delete the column and any extra floor tiles, and fill in the hole. 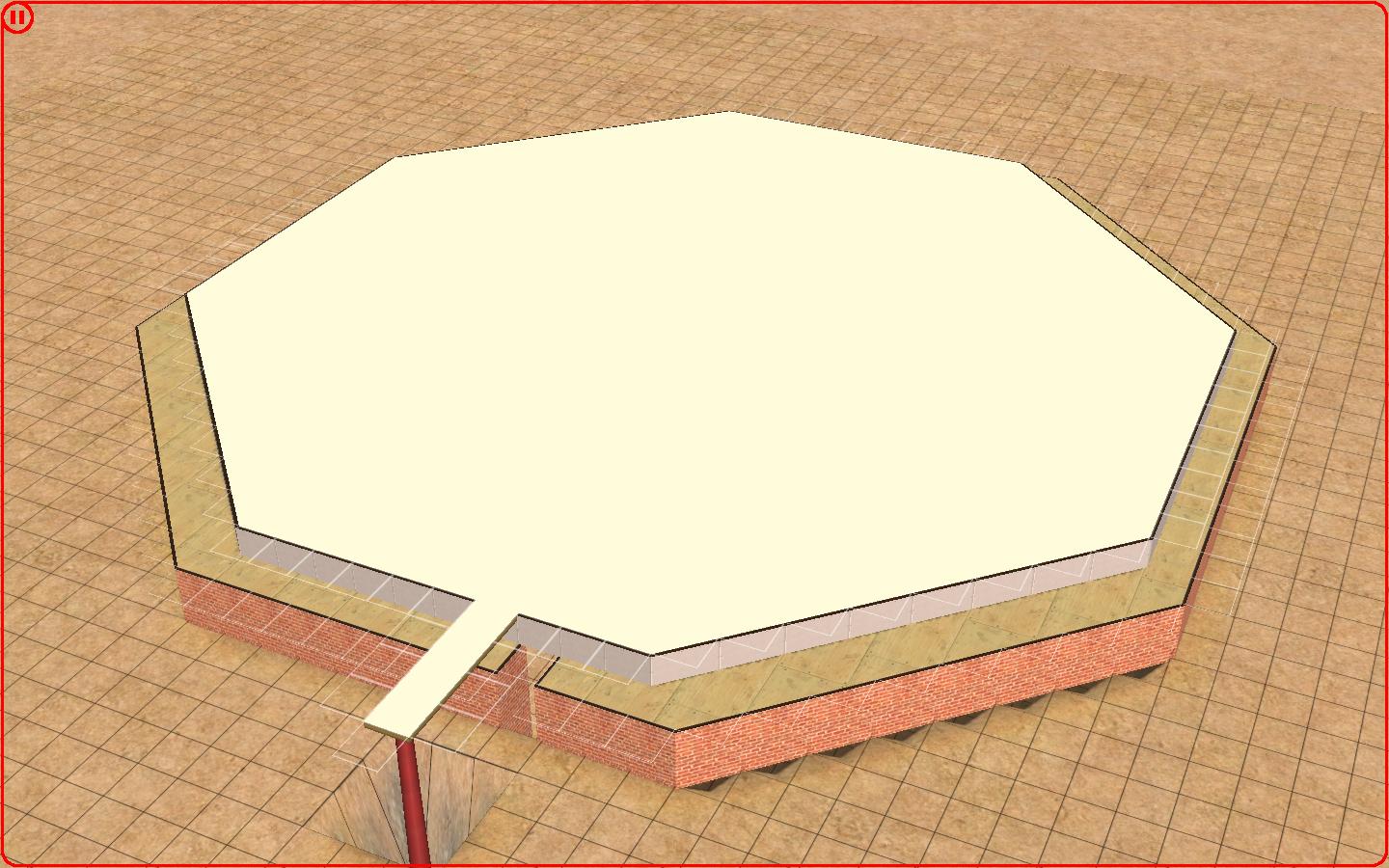 Now we're going to create what will eventually make up the visible part of the dome- the lattice of railings and edgings. Once again, there are many ways that this can work, but for this tutorial, I'll show you the way I personally prefer to use. First, we'll take a slightly more substantial railing and encircle the entire top portion of the dome. Next, using that same railing, make the 8 spokes, running from the middle of each side in towards the center of the dome. (This is why the length of each side needs to be an even-number. If it weren't, you wouldn’t be able to line up these spokes.) 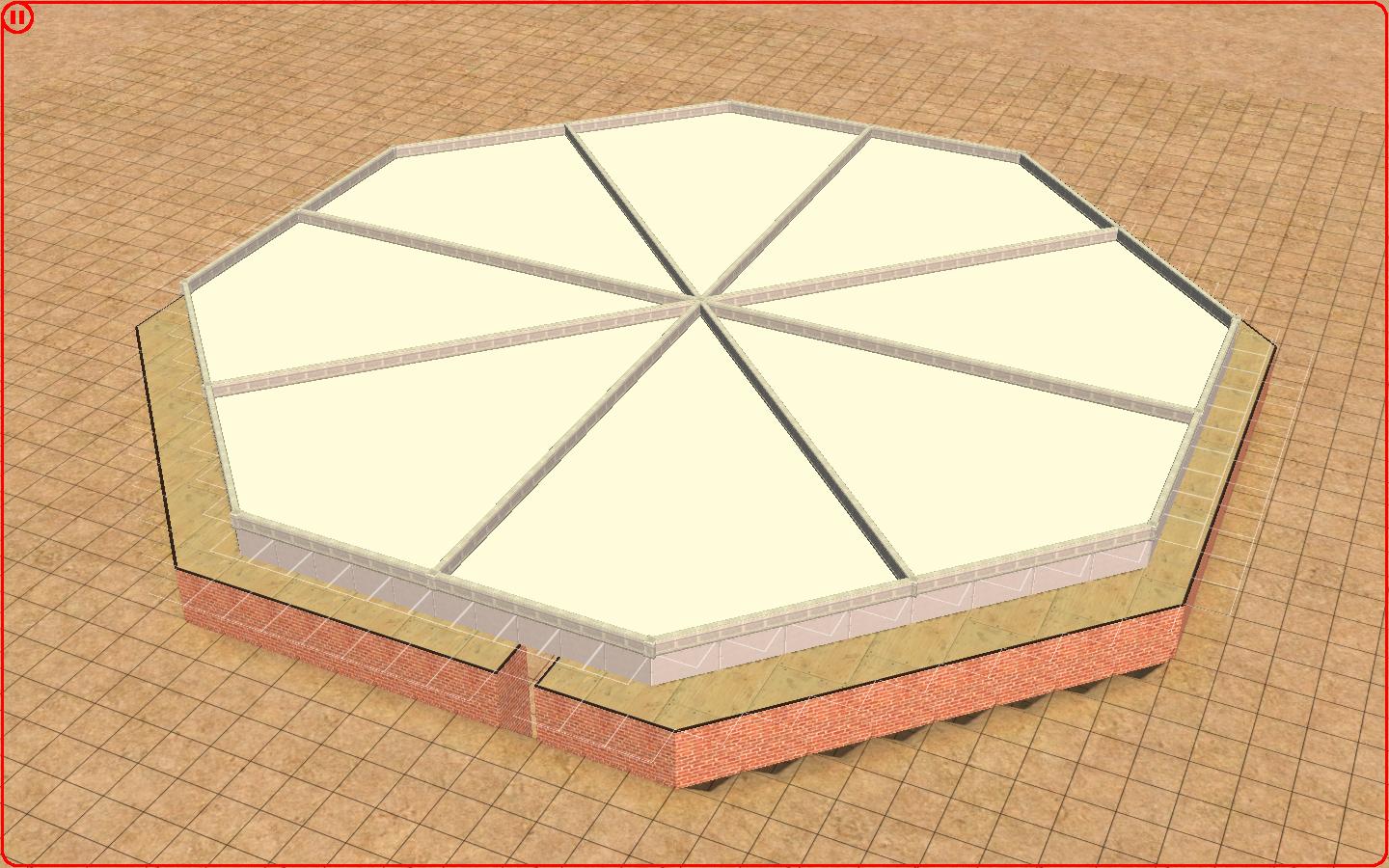 Next, using either the same railing, or a slightly smaller one with a similar color, connect the corners of each side in towards the spokes. We should have something that looks kind of like an 8-sided snowflake at this point. 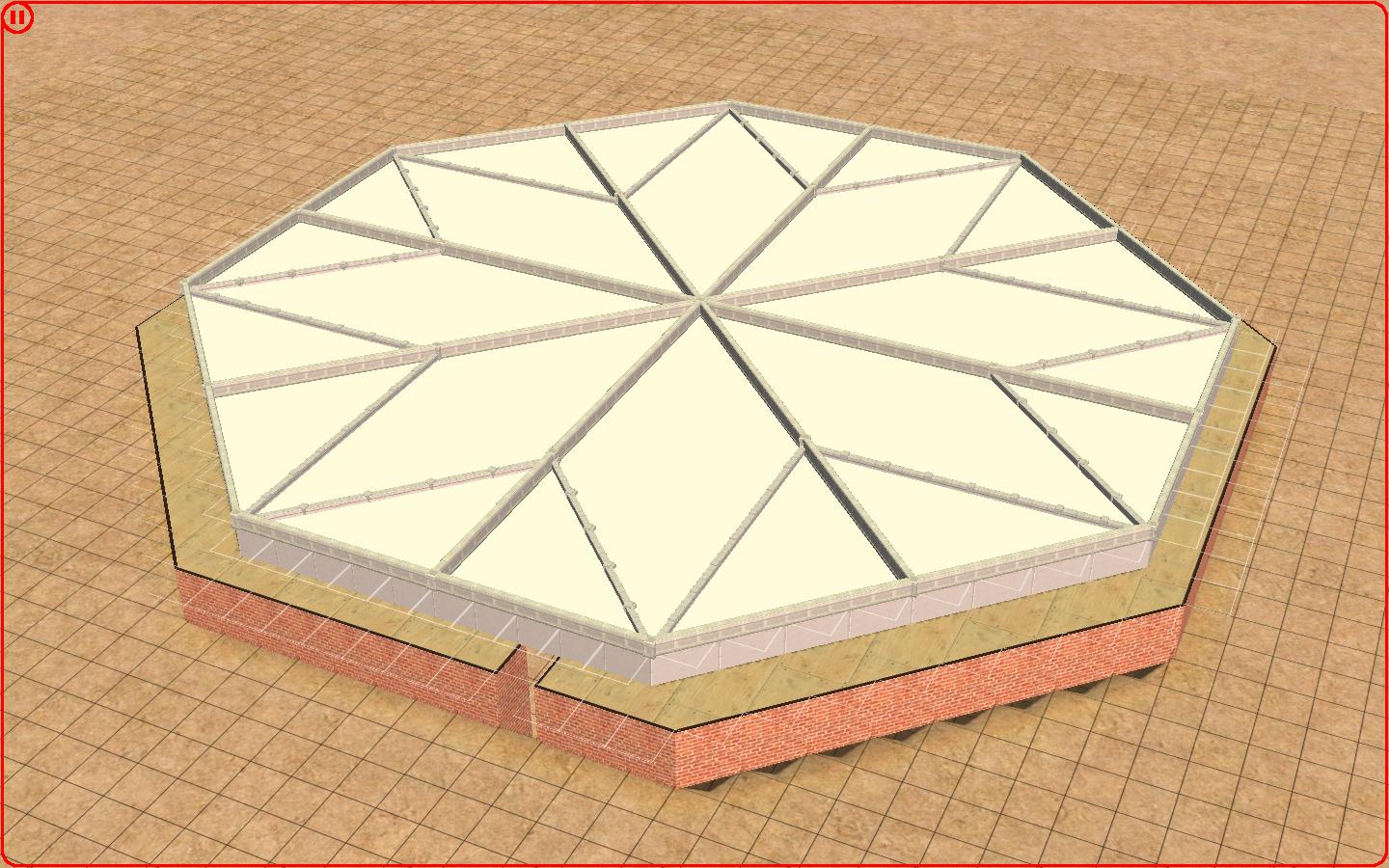 Now, we'll take a very fine edging ("The Great Divide" series of borders that came with Apartment Life works great here), and cover the entire rest of the grid within our border. Be sure to save the lot once you finish this step, since the next steps are the ones that are most likely to cause problems, and they're also a bit tedious... But, we're finally ready to start raising the dome! 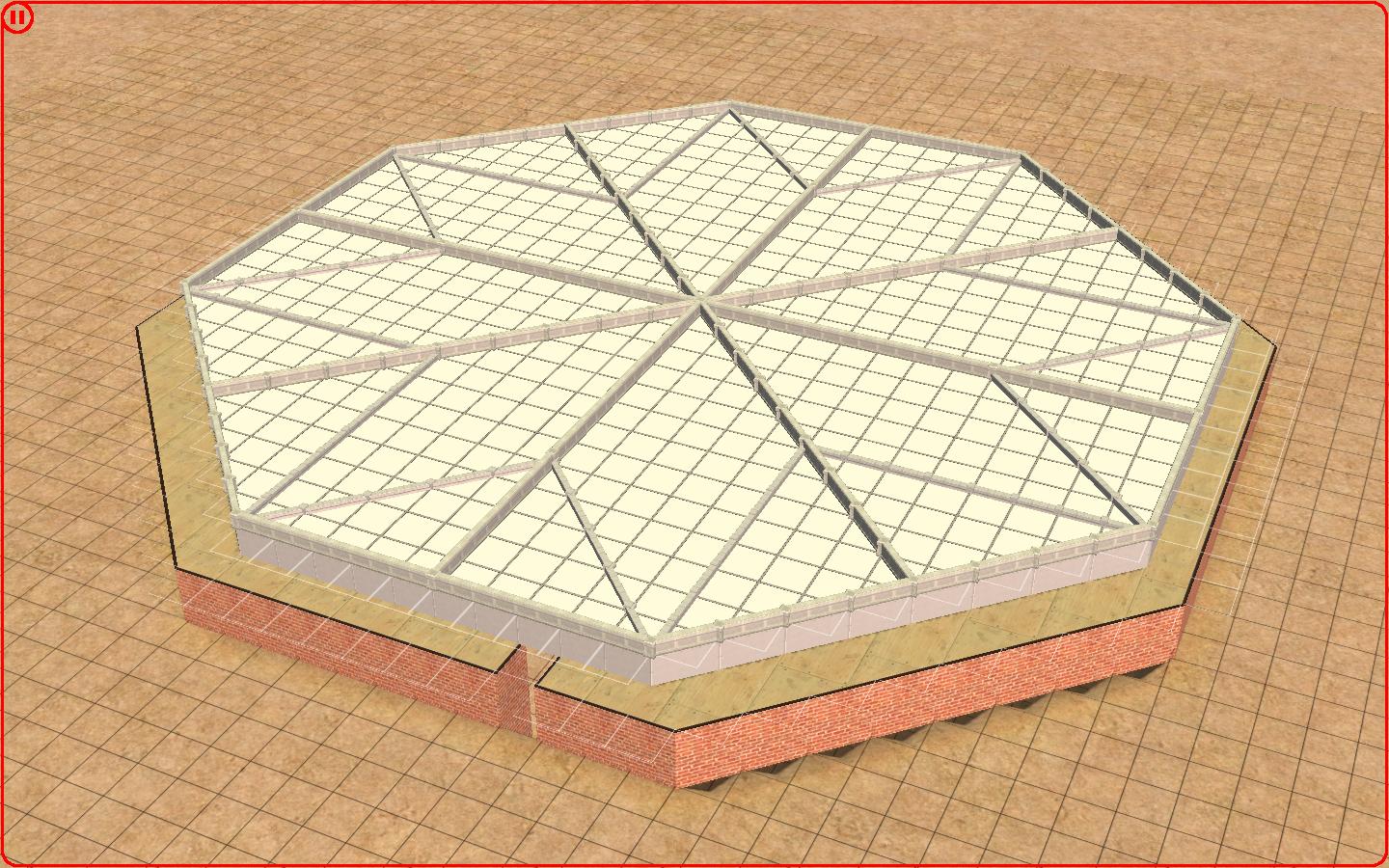 Turn CFE back on by typing "boolprop constrainfloorelevation false" into the cheat window. Go down to the lowest level, and raise a grid square of the terrain however much you want the first tile of the dome to rise by. For this lot, we'll raise it by 6 clicks. Using the leveling tool, drag the terrain within the dome until it's that same height, with the sloped portions taking up the last tile on any side. (Once you've done this, it's a good idea to go back up to check the top level, just to make sure the dome is starting to distort properly.) 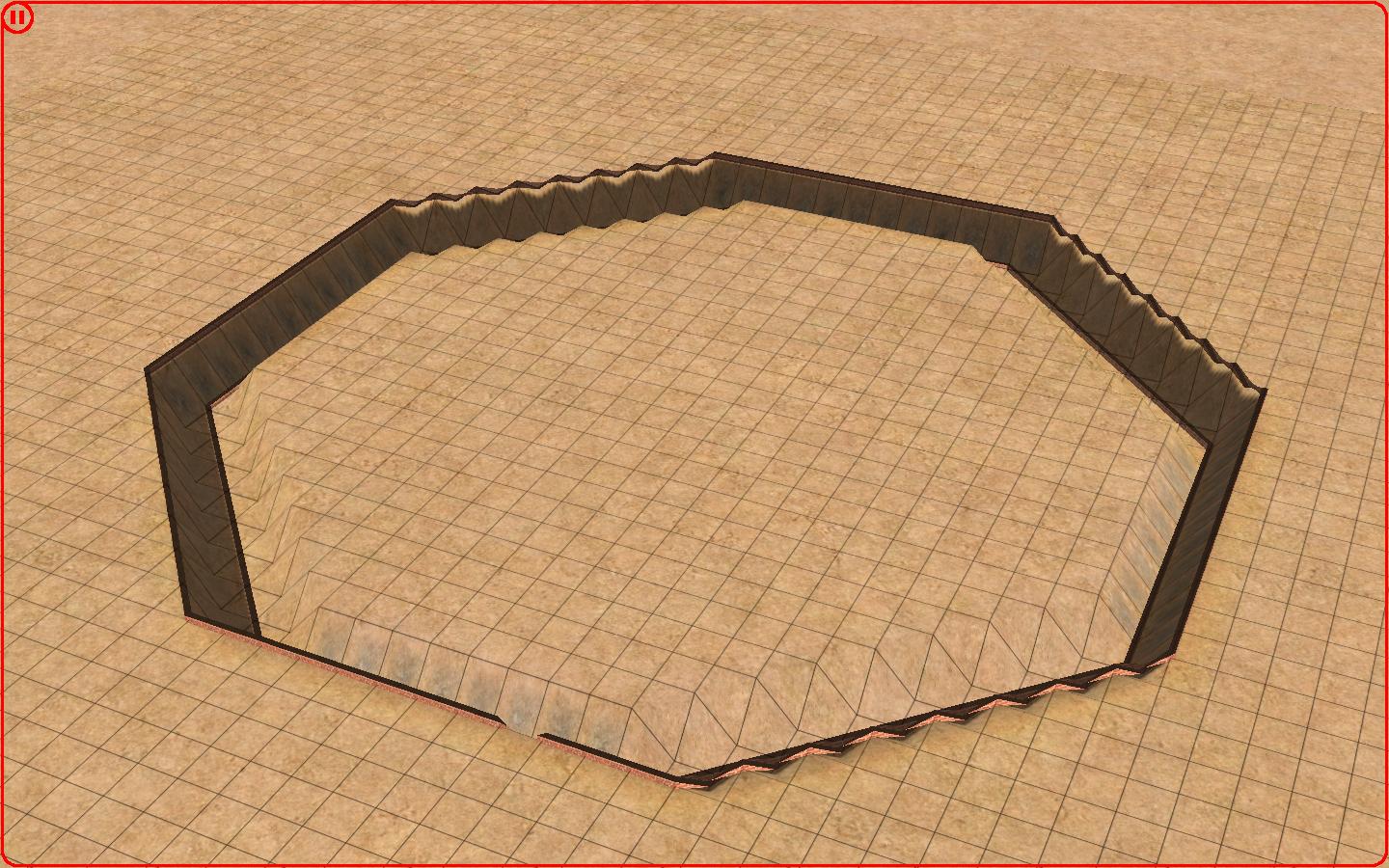 Go back to the foundation, and in the newly raised area, raise another grid square by one click less than the first tier (so an additional 5 clicks, in this case), then go back and level the terrain on top of our first tier to this new height, once again leaving a one-tile gap on each side to actually reflect the slope of the "hill" you’re creating. You should be able to see where this is going... 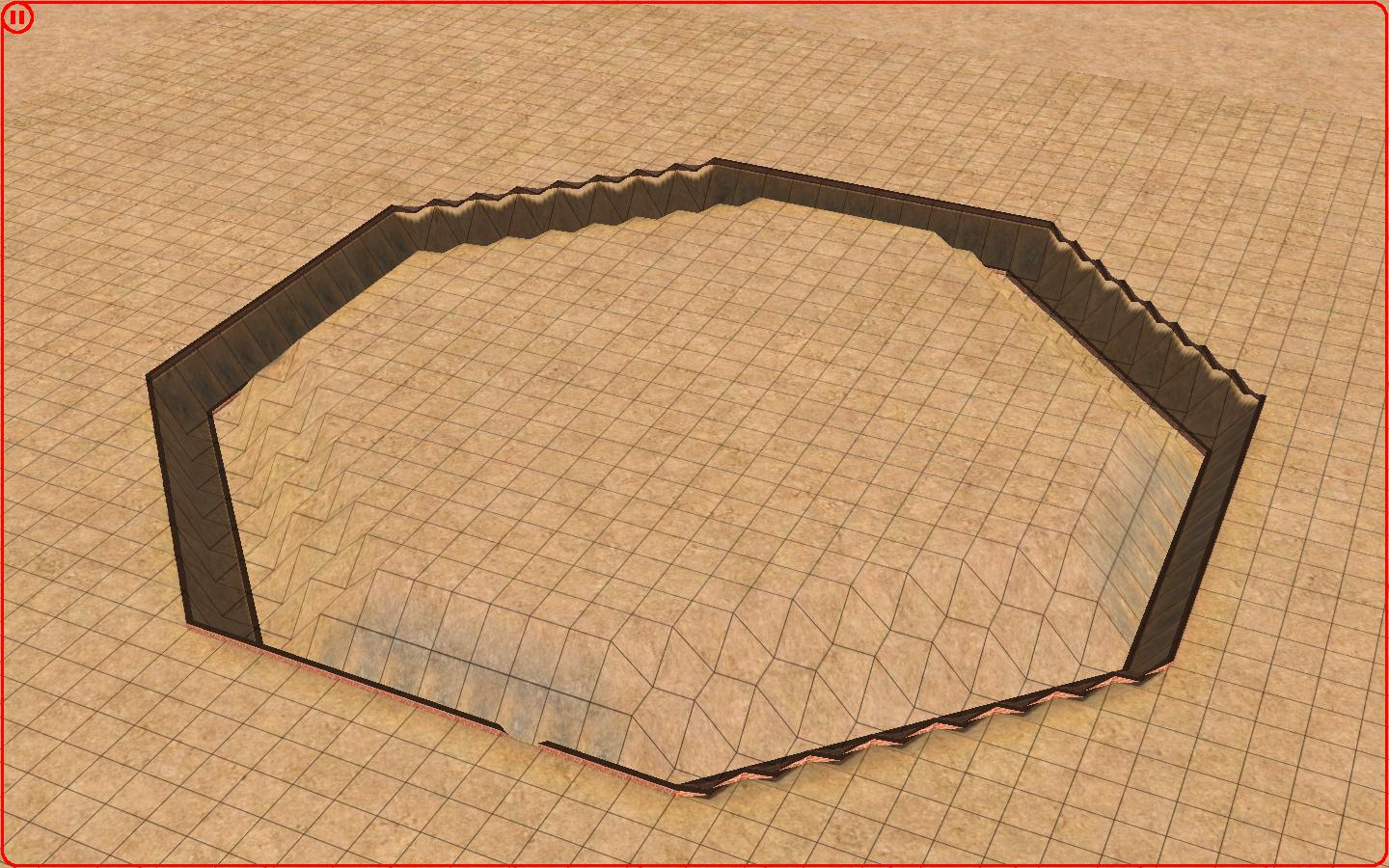 We'll go back and repeat this process several more times, gradually reducing the slope, until the hill reaches the point where we're no longer able to raise new levels without distorting previous ones. There should be smoothly-sloped sides on the straight edges of the octagon, and a mess of steep slopes and flat edges on the diagonal sides. That's what we'll tackle now. (And just a heads-up, this next bit is the most tedious part of the whole process...) 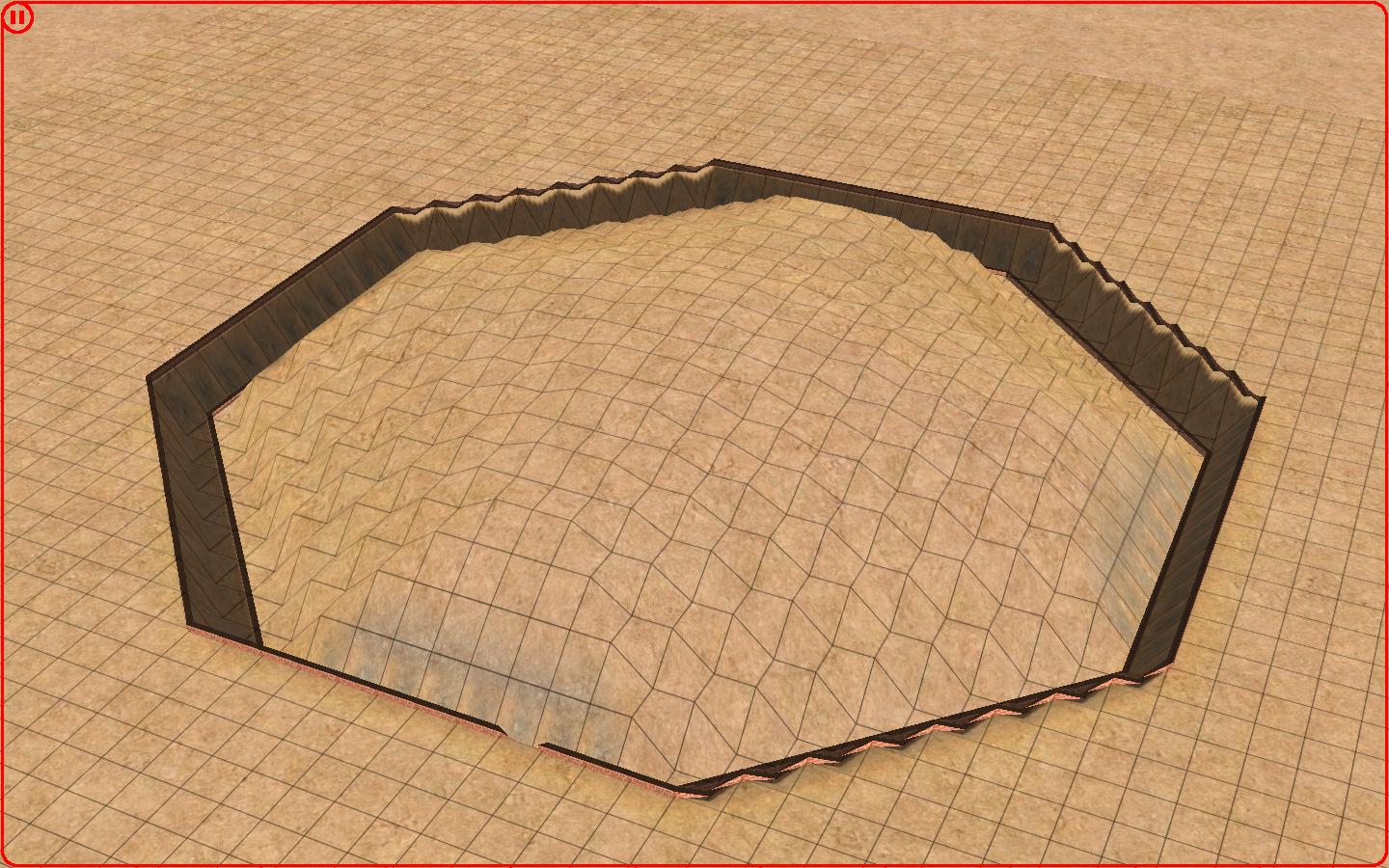 Starting at the lowest level, we're going to round out each irregular portion, one click at a time. Once we know the height we're raising or lowering them to, we can just go around the perimeter and take care of each of them. This requires your best judgment as to what looks best, just be sure to be consistent- it's an octagon, so there are 4 lines of rotational symmetry and 4 of mirror symmetry, which means most changes we make will need to be made in the exact same way at 8 different points. (Remember learning this in highschool geometry? And you thought you'd never use it! 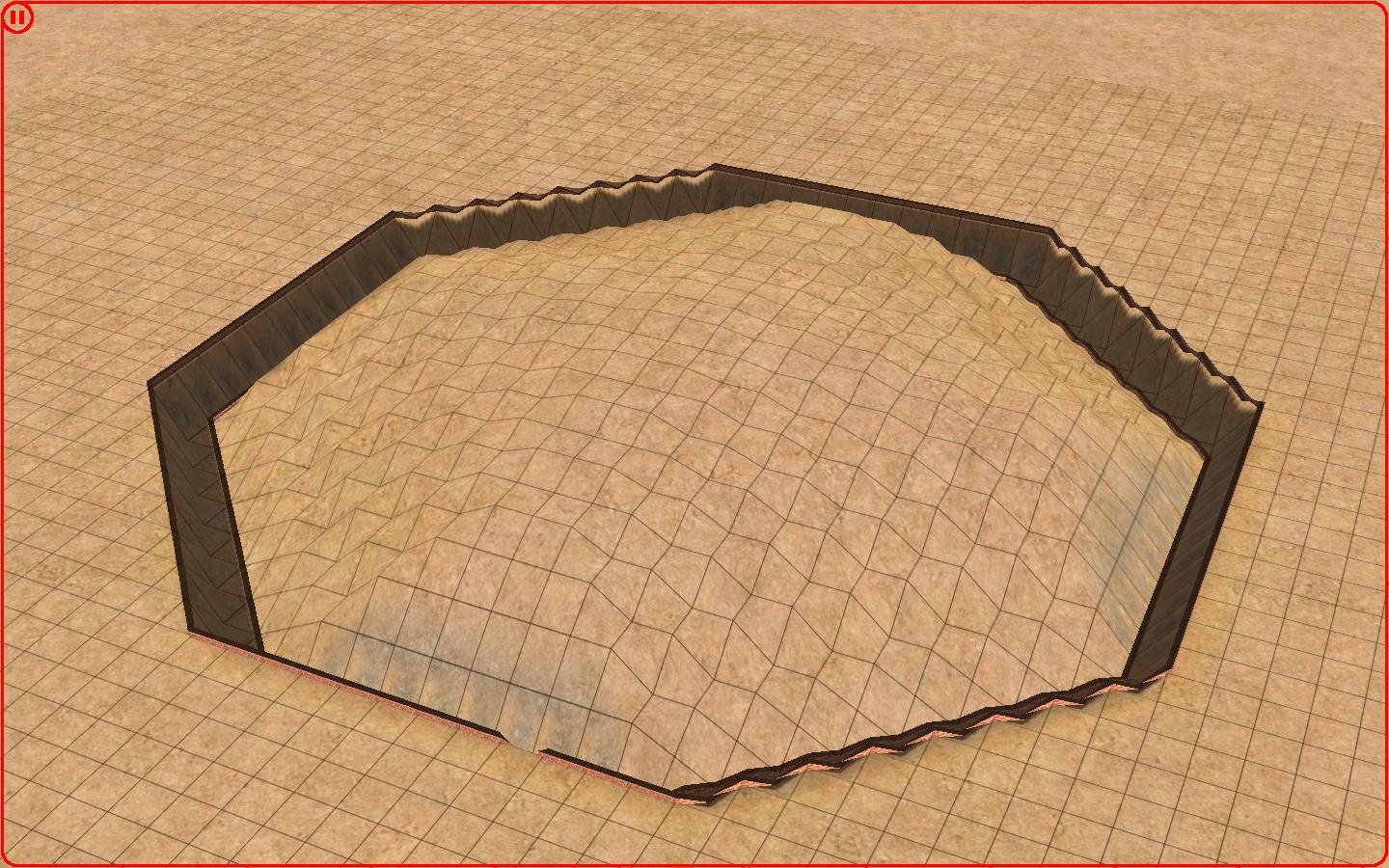 As with the previous step, we'll just continue this process as we move up the hill we've created, with smaller and smaller changes each time, until we've reached the top and made the hill symmetrical in each direction. 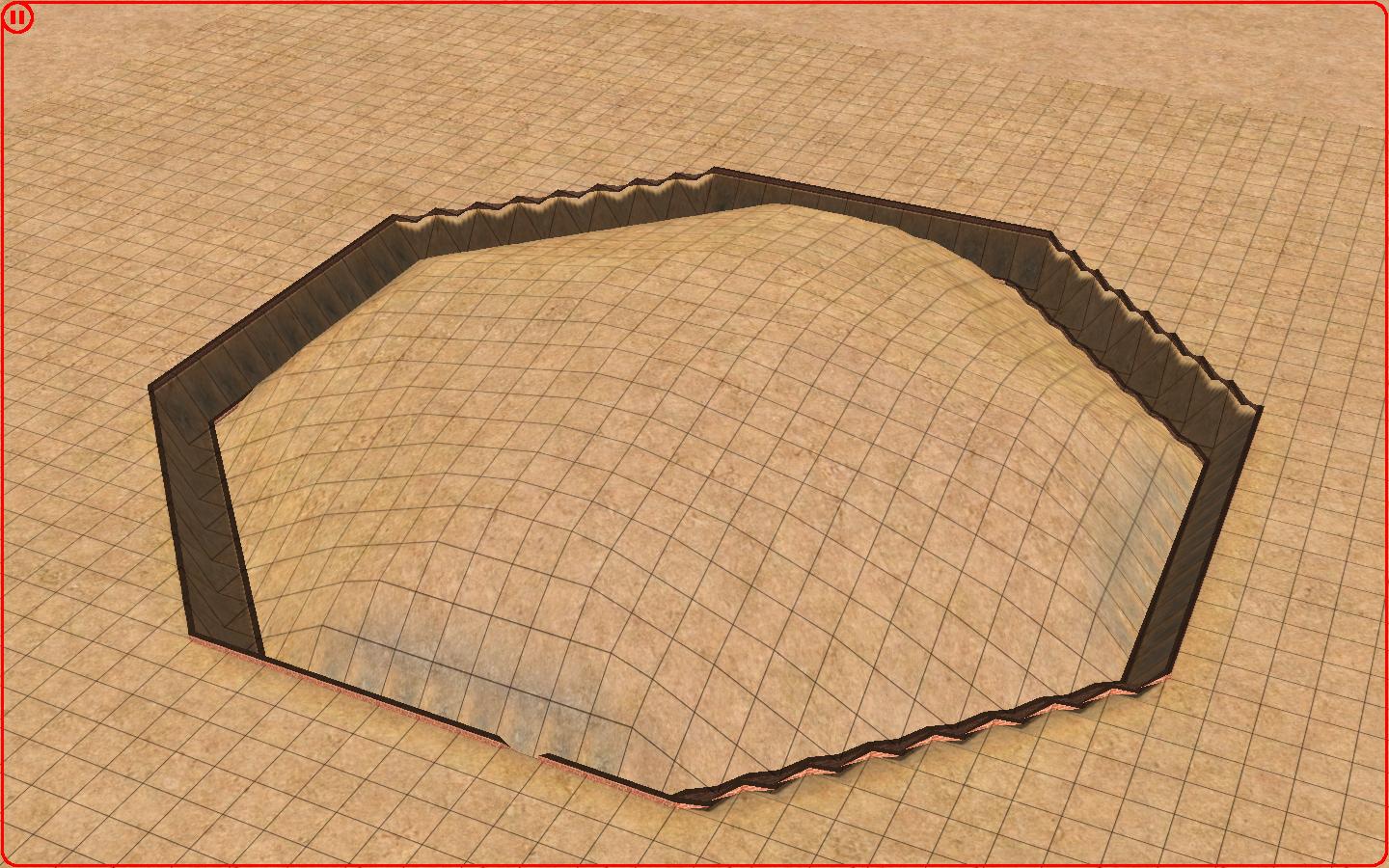 We're not quite done with the hill yet... along the corners of the hill, there are still a few small edges that are 'pointier' than we want them- they can be solved with one click, in most cases. We'll go around and smooth these last few points out quickly here. 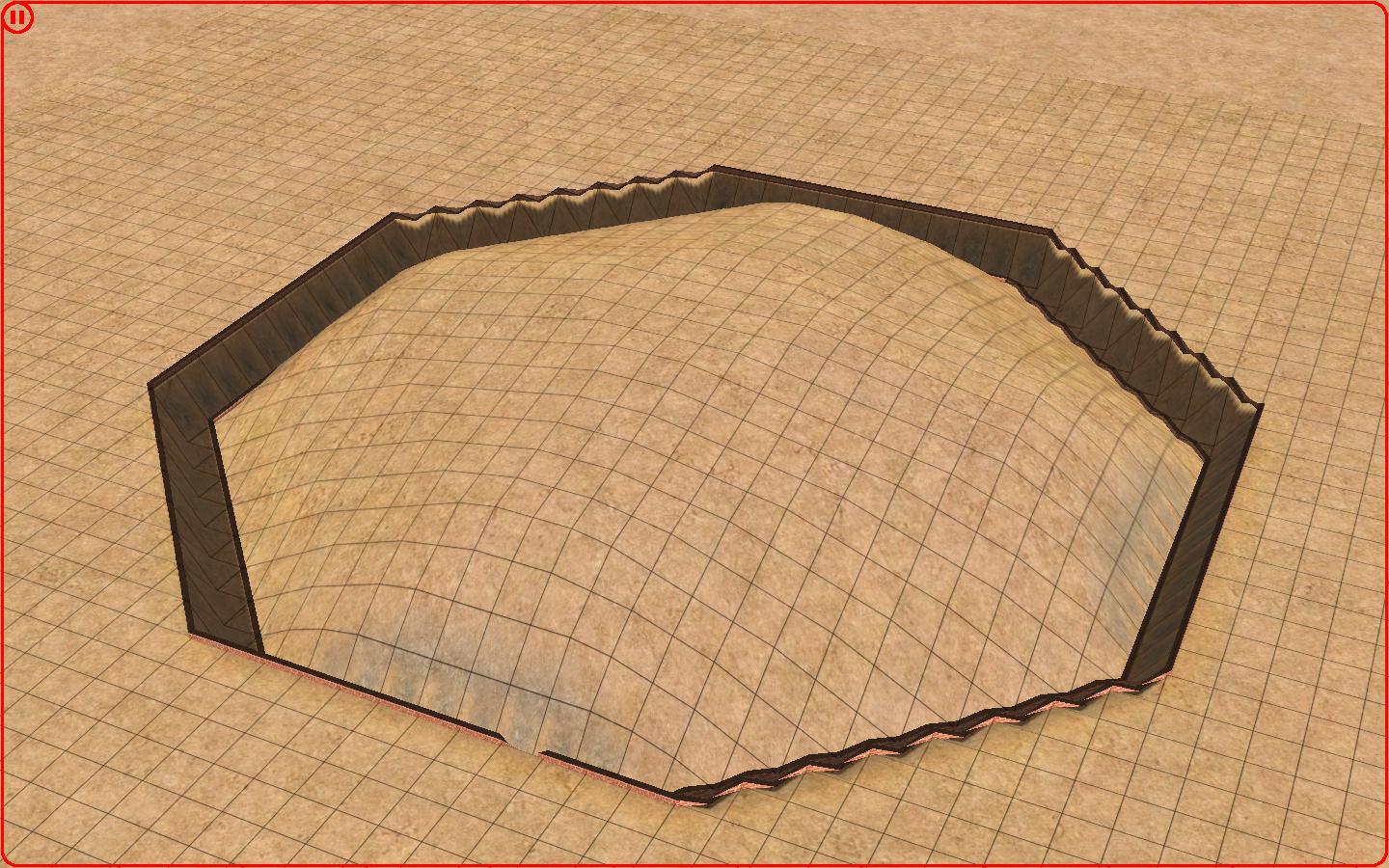 At this point, the dome is raised. Turn off CFE by typing "boolprop constrainfloorelevation true" into the cheat box, and then level out the terrain at the bottom of the dome. 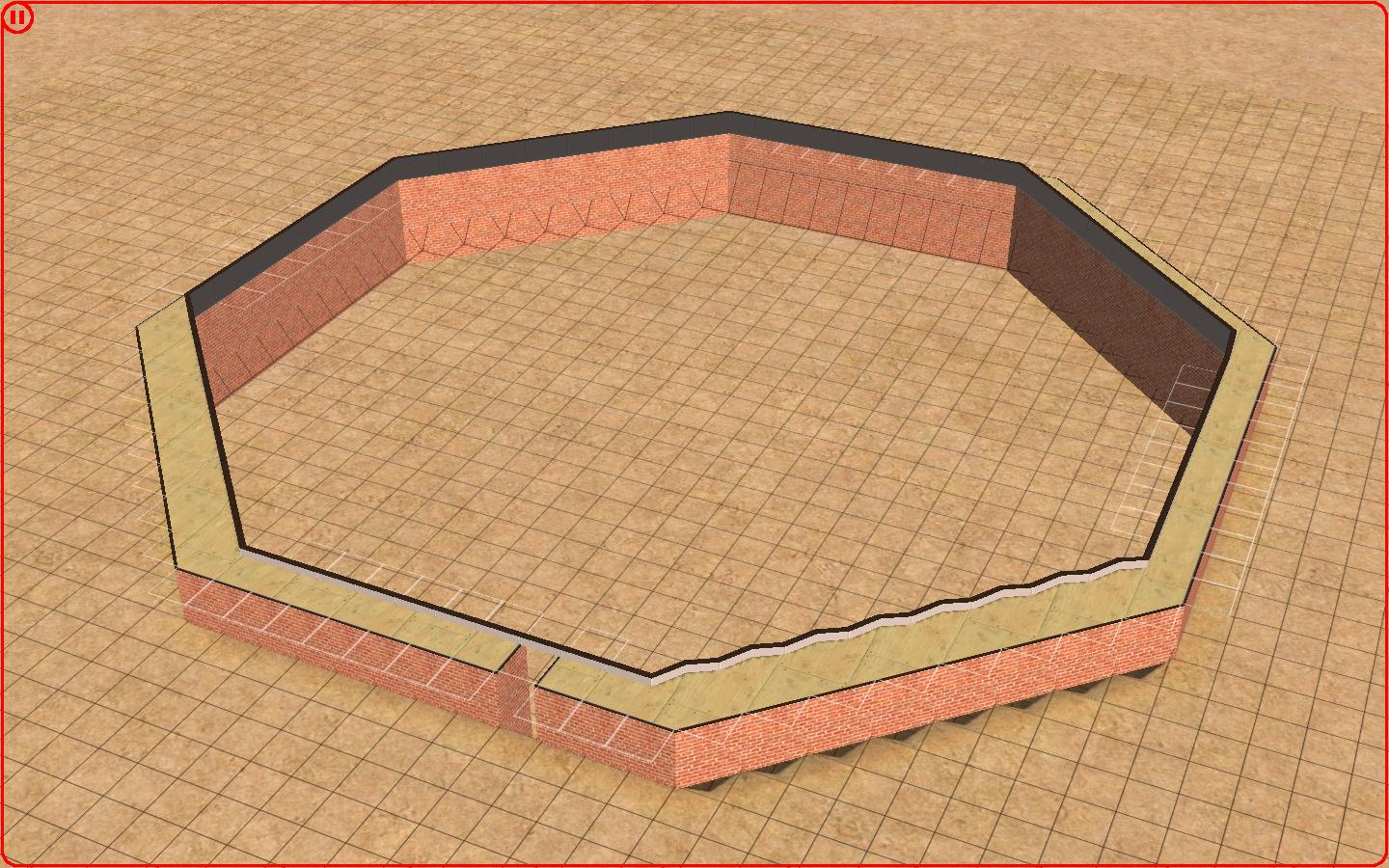 From now on, much of what's left to do is personal preference. We'll want to paint the interior and exterior walls and come up with some sort of airlock/entrance. As far as the entrance goes, if we want the interior of the dome to still be in the sunlight, we can't put a real wall for a real door there, or the whole dome will be considered "indoors," and will get dark- my solution has always been to use the Seasons greenhouse walls and gates, since they still go all the way to the ceiling, for a good "airtight" seal. The dummy level will also pose a problem for sunlight, since it’s enclosed by "real" walls at this point. If it doesn't bother you, just ignore it. If it does,we can just delete a section or two of the dummy walls, and replace them with a half-wall. We can paint it the same as the rest of the level, and it'll more-or-less disappear (I did this with the center two wall segments on the front of the dome below- see how they're almost indistinguishable from the dummy level walls?). 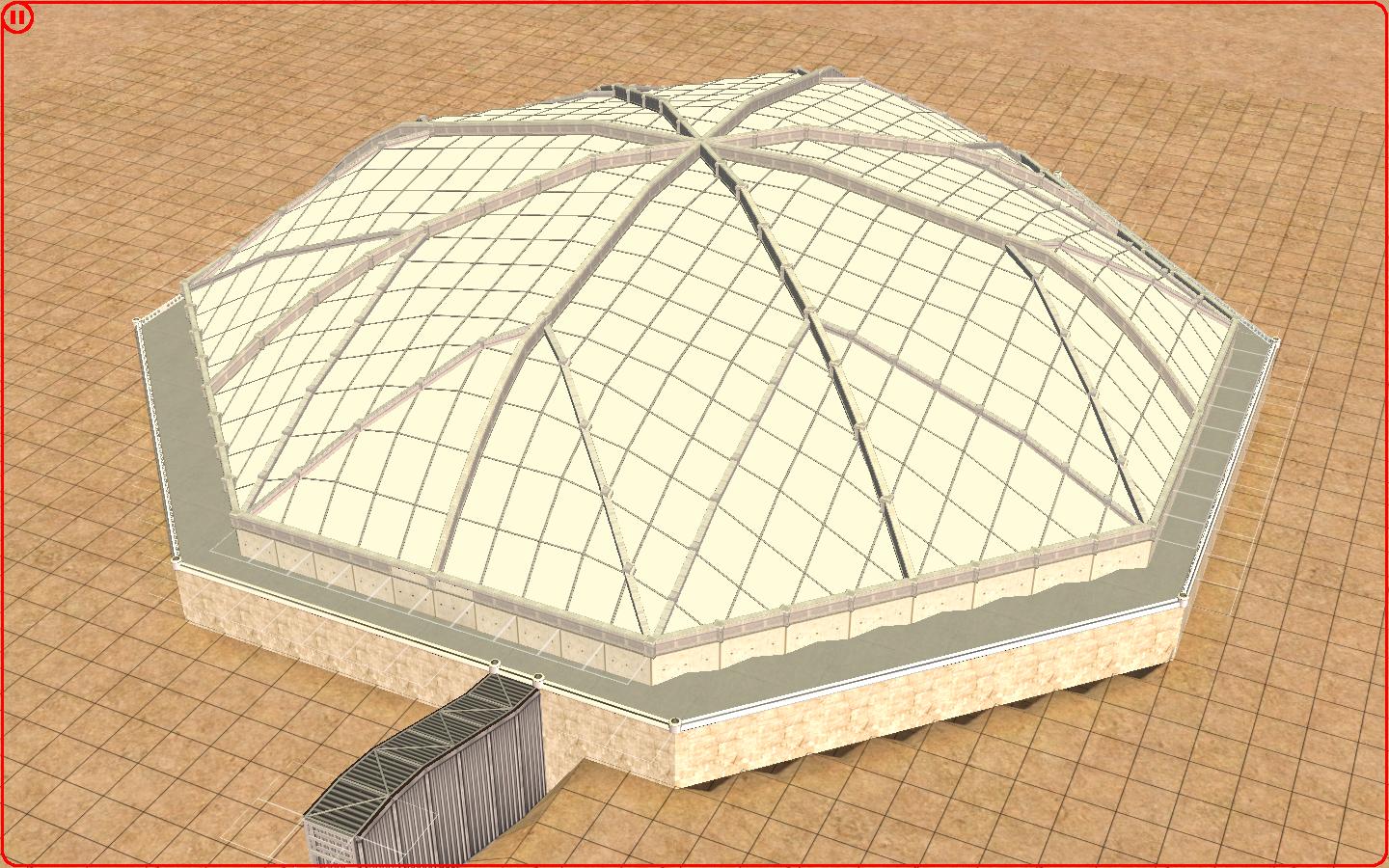 What you construct inside the dome is entirely up to you, but whatever you decide on, leave the floor tiles that make up the dome in place until you're COMPLETELY finished- they anchor the shape of the dome. Without them, construction underneath the dome will distort the shape we spent so much time perfecting, and we don't want that! Now, obviously, you'll want to be able to see what you're working on as it goes, and you still can, it's just harder than with a typical lot. When you want to take a look at the lot without its floor tile shell, first SAVE the lot, then erase the floor tiles on the dome, judge how your progress is coming, then exit to the neighborhood WITHOUT saving. Then you can reenter the lot and continue on, with that anchoring layer of floor tiles still intact.
You can decorate the lot however you see fit, landscaping, creating craters, putting trees, whatever you like, from science-fiction appropriate hi-tech, all the way down to a traditional suburban setting, reminiscent of the streets of SimCity, millions of miles away. 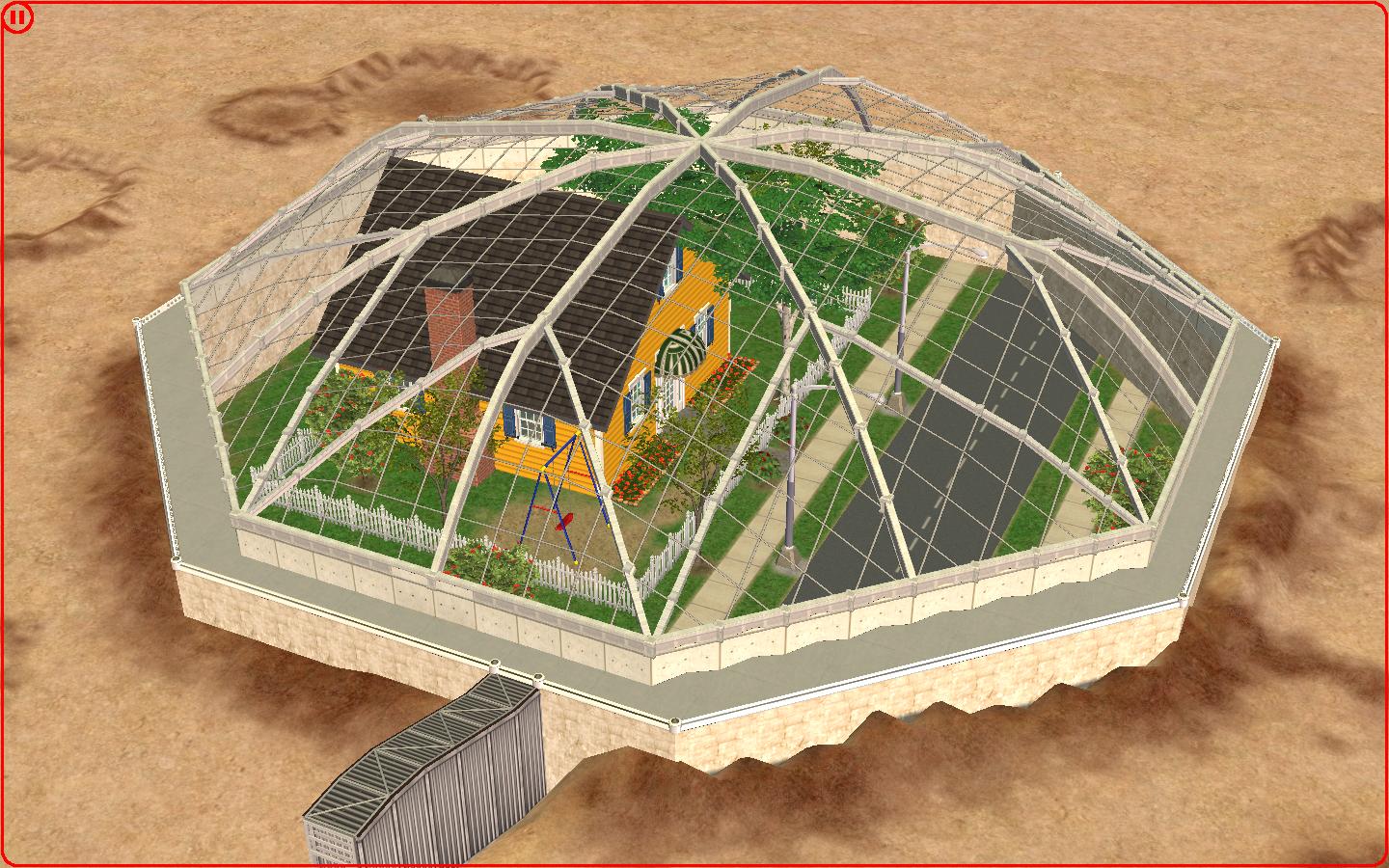 Quote:
Welcome to the Dark Side...
We lied about having cookies.
Advertisement
Jawusa

This is great! Thanks for writing this tutorial.
I can't wait to test it out.

This is great, thanks for the tutorial. I've build the dome and saved it. Now I want to look what the dome is like without the floor tiles up the dome, but I can only remove the tiles that are flat or nearly flat. How do you remove the other ones? Moveobjects is on.
Zarathustra

CTRL+Click+Drag. Each individual tile is considered a separate "room" for flooring purposes, so CTRL+SHIFT+Click does nothing, but by going at different angles from even just one flat tile, you can eventually drag across the entire dome, and that will delete non-flat tiles as well.
Welcome to the Dark Side...
We lied about having cookies.
TychoH

It looks great.
Back to top