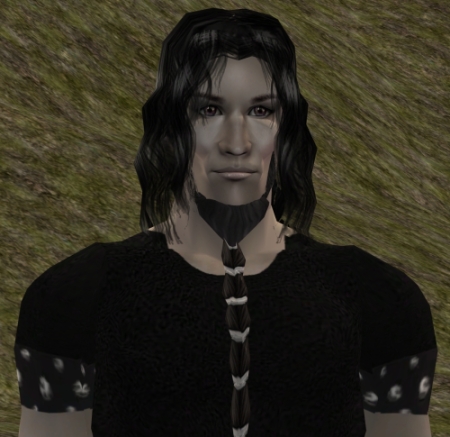 32 Thanks  Thanks     2 Favourited
This sim started as an attempt to make Melkor, the Valar who became the first Dark Lord. But he just didn’t look evil enough and the more I worked on him, the more I thought he was just too handsome to be Melkor. So he became Mandos. In Tolkien’s mythology, Mandos (or Namos) is the judge of the dead. He is stern and unyielding, but not cruel or evil. He was once moved to mercy by Luthien and allowed her and Beren to be released from death. I really like the way this sim turned out. Of course it’s all because of the great components provided by some great creators.

Please note, I used a bodybuilder skin, but it is not shower-proof. There are many shower-proof Body Builder skintones at Insiminator.net: http://www.insimenator.net/index.ph...662f1fe22f263af

*I received express permission to use all this content either through the artist’s policy statement or a direct request for permission.*

Helaene: subtle brows
http://www.helaene.com/
Our sims would all be so dull without her creations.

Enayla: Eyes (Incoming) and skintone (pixie dusk)
http://www.modthesims2.com/member.php?u=40418
She’s back! And better than ever! I didn’t think she could possibly improve on her previous work, but she has. Her pixie series is amazing.

Beard (Static-X) by Necrodog
http://www.modthesims2.com/member.php?u=33822
I really love his beards.

For the clothing (Togas and Hero Movie Stuff by beosboxboy):
http://www.insimenator.net/showthread.php?t=2171

My Policy:
I've decided everything that I've made can be boiled, fried, folded, spindled mutilated...Whatever! My only stipulation is that everything stays 100% FREE. Beyond that, a little nod for credit is nice, but I'm not going to get worked up over it if you don't.

This works fine for my neighborhoods. It's a lot more complicated with my sims though. They are full of other people's work and there is a wide variety of terms of use among them. So you shouldn't repost them as is. If you want to take the sim face and slap different skin, hair, eyes, clothes on it... fine, have at it.

**Don't interpret this to mean you have the right to use the custom content I used without credit to the original creator though.**