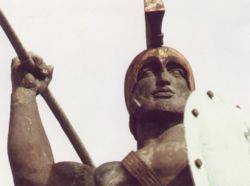 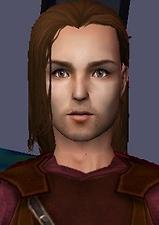 "Although extraordinary valor was displayed by the entire corps of Spartans and Thespaians, yet bravest of all was declared the Spartan Dienekes. It is said that on the eve of battle, he was told by a native of Trachis that the Persian archers were so numerous that, their arrows would blot out the sun. Dienekes, however, undaunted by this prospect, remarked with a laugh, 'Good. Then we will fight in the shade'" - Herodotus , Histories, 7.226

Dienekes is one of the main characters in Steven Pressfield's novel "Gates of Fire". His name is not used in Frank Miller's graphic novel 300. However, his statement about fighting in the shade does appear in that work and the film based on it; the name of the character who delivers it is Stelios. The main difference being that historically Dienekes response was given to a friend, not as a response to a taunt.

A carved lion monument bearing the inscription below was dedicated at his death site commemorating the sacrifice of him and his men:
“Go, stranger, and in Lacedaemon tell,
That here, obeying her behests, we fell” - epitaph at Thermopylae (Simonides' epigram)

Two Spartans survived the conflict. Aristodemus suffered an eye injury and was sent behind the lines, eventually ordered back to Sparta with the retreating allies by the King. Pantites was sent by Leonidas to raise support in Thessaly but returned to Thermopylae only after the battle's conclusion. Pantites hanged himself in disgrace after being shunned as a "trembler".

Thermopylae was the triumph of citizenship over servitude. They died for us and so we could keep democracy. They are my heros, I get in such a commotion when I talk about them, so I decided to make this homage to Dienekes in this contest, as the movies didn`t, as well as to all of them.

Diekenes is packaged with Maxis clothes, as the last screenshot. So, please, give him the honor of his clothes as he is in the pictures, as they are not included.

Included CC - Thanks so much to the creators
Eva Browns by Helaene at http://www.helaene.com
Eyes number 02 by Barcelonista at http://www.justsims2.ru/index.php?M...erySection=eyes
Skintone Medium by Ren at http://www.modthesims2.com/showthread.php?t=206740

His hair and stubble are by Maxis.

Dienekes Sim by me.

Thank you so much.