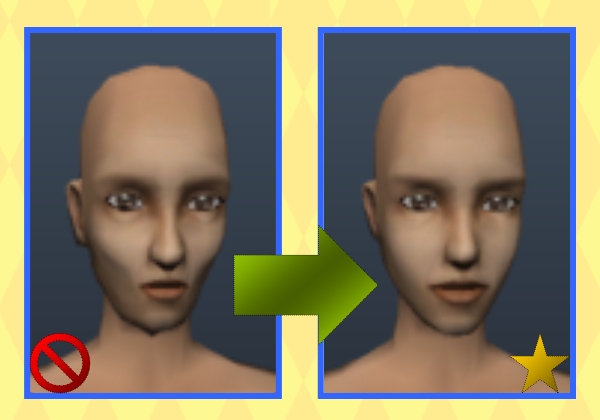 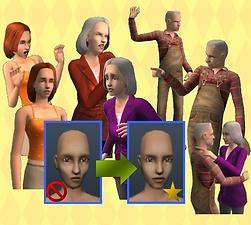 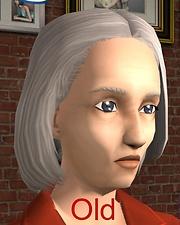 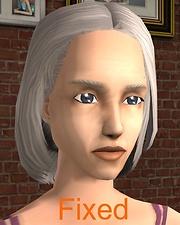 Created by Sim-Wolf
View all Downloads
Uploaded: 30th Sep 2008 at 12:15 PM
Updated: 2nd Oct 2008 at 4:05 PM
I find myself using the "base" face template a lot when creating Sims in CAS now. (You know, the 2nd one - and isn't ugly). But I noticed something which really bugged me. The face looked great on both the men and the women, but when the women grew up into elders, the area around the chin and mouth was, well... I'll say "disorted" or "uglified". I suppose it might just be something which only bugs me personally, but I found out how to replace the face templates and I set to work right away and fixed it!


What this Mod Does?

This mod replaces the Base Face template for Elder Females with the Adult Female version. For some reason there are different templates for the two age groups. (Elder Men with the face appear normally in my opinion).

"My Documents\EA Games\The Sims 2\Downloads" or in a sub-folder in your downloads folder. I have installed it in my downloads folder and it works perfectly. It may work by putting it in the Bins folder for your latest Expansion Pack, but I don't see the point in that.

• Yes. The thumbnails in Create-A-Sim will still show the old version of the elder face for the base face template even after installing this mod. The actual face will appear correctly on the Sim, but the thumbnail remains un-updated. Its not such a big deal, but if it annoys you, you can hold down Ctrl and right click on the elder face template's thumbnail in CAS. It will refresh the thumbnail creating a new one with the fixed face. (Thanks to psychosim0 for the tip.

• Also, if you have any other replacement mods which edit or replace the "base" face template for Elder females, they will most likely conflict. I doubt you will have any however. Well you might. But I see the base face as one of the best looking faces in the game (excluding previous Elder Female versions), so why would you want to replace it? You might, so if you do have a mod which also edits the Elder Female Base Template face, then they will conflict.

• One last thing! This will NOT change the faces of Elder females already born in game. You will need to change it manually by using the Cosmetic Surgeon from Uni or a hacked object. It does however give any futher female Sims this face when created in CAS as an elder (or younger, but when they grow up, they will have this face). Also, any adult females who used this face who are already born in game, and any children they have, will unfortunately receive genes from the old face and will get that chin if that actually inherit that chin from a Sim who has that face that is. You could probably use Christianlov's DNA fixer tool to edit all Sims who have this face and then fix their DNA, but I do not know.


That's about it. Hopefully a lot of you will find good use of this mod. I found it a real shame that female Sims who had that such a good face would obtain the ugly mouth/chin when they grew up into elders. But now its fixed! I recommend looking at the images below to compare the two faces.
The image I created with all the Sims was the one I was going to use as the default image, but I decided it would be too hard for people to recognize what the mod was if they only saw the thumbnail of that image. But I uploaded it anyway just for fun.

All comments are appreciated.