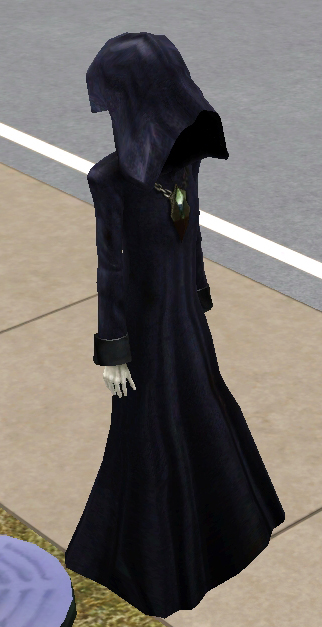 Created by stevekills.com
View Policy / About Me View all Downloads
Uploaded: 10th Sep 2009 at 3:33 AM
As you may have noticed by now, I am fascinated by death. But show me a living mortal who doesn't, and I'll show you a liar.

Anyway, I have now opened the possibility to wear the robes of death itself. How you say? I'll never tell, but let's just say I kinda owe a certain immortal being a favor. But let's just overlook that, yes?

Moving on, there were some modifications in order to be able to wear them, but they were taken care of.

Also, the robe itself can be recolored. That way, you can sport different colors, unlike Dr. Killy McGee. Black robes, black hood... That's refreshing.

In conclusion, I kinda forgot what I was talking about, so here's the Robe of Death anyway. I hope you enjoy it.

I just hope he doesn't know this is here... He may just try to take them back...

Additional Credits:
TSR Workshop, Milkshape
This is a new mesh recolour, and means that you will need to download the particular mesh itself in order for this to show up in your game. See the Meshes Needed section or read the text for more information.
Files Need help with downloading or installing content? Click here!

Well, seeing as how there's no way of me following my downloads into your computer to watch you alter them, feel free to do so. If you credit me, awesome. If you link back to me, even more awesome. If you don't, Satan will rain down your throat with hot acid, dissolve your testicles and turn your guts into snakes! Just kidding, but ten points goes to whoever gets the reference I just made. Seriously though, if you don't credit me, that's fine. Really, what am I gonna do? My stuff isn't popular or well-known to the point where the threat of me stopping making stuff poses any threat whatsoever. Also, I have the tendency to disappear for long periods of time, so my stuff is inconstant anyway. I'm kinda rambling so I'll sum it up like this: Go for it. I look forward to seeing what you guys come up with. So, best wishes to all your creations.