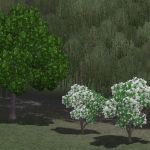 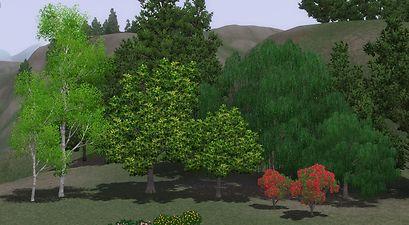 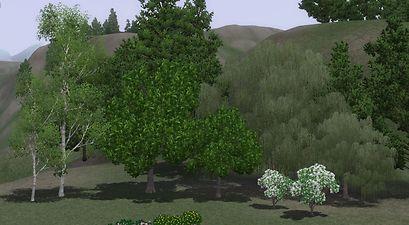 This is a texture replacing mod that changes several of the plants in the game - mostly toning down the saturation. I found many of the plants a little bit, well, eye-searing, and thus never used them, so I went through and did some tweaking.

Plants changed (and how) are:

These maybe look a little bit more washed-out in my pics than they really are - the pics were taken in Bridgeport, which has a perpetually grey cast to it (which I love) - they will likely not look -quite- so dreary in someplace like Sunset Valley.

All of the textures are named in the file, so if you want to delete some of them in s3pe, you can. For some reason, one of them wouldn't name properly - it should be called treeWillow.

These are default replacement textures, so they will automatically replace the existing plants/trees in-game. You will not have to re-place the plants and trees for this to work; you may have to delete your thumbnail files for the changes to show (though it doesn't matter and you can't really see much difference in the thumbnails except for the bougainvillea).

These will also work with Create-a-World; however, you will not see the changed textures in Create-a-World itself. You will see the changes in Edit in Game though - however, if you build a world with these, you'll need to point people to this thread (or include the file) if you would like it to look in their game as you see it in yours.

As this is a DDS replacer, similar to a skintone default replacement, it isn't a real "mod" exactly. It's not a global mod, core mod, or XML tuning mod, and will not conflict with anything unless you have something that replaces the exact same texture files. As such, it is compatible with all versions of the game, will not need updating for EPs/patches, and really is about as safe and simple as anything possibly can be.

Currently, this is not part of Tiny Texture Replacers Combined. I wasn't sure if this was something I should add to it as it is perhaps more a matter of personal preference - but if folks think I should add it, I'll be happy to.

Peter, Inge, Delphy, Echo, Armiel, and your mom.
Other Information