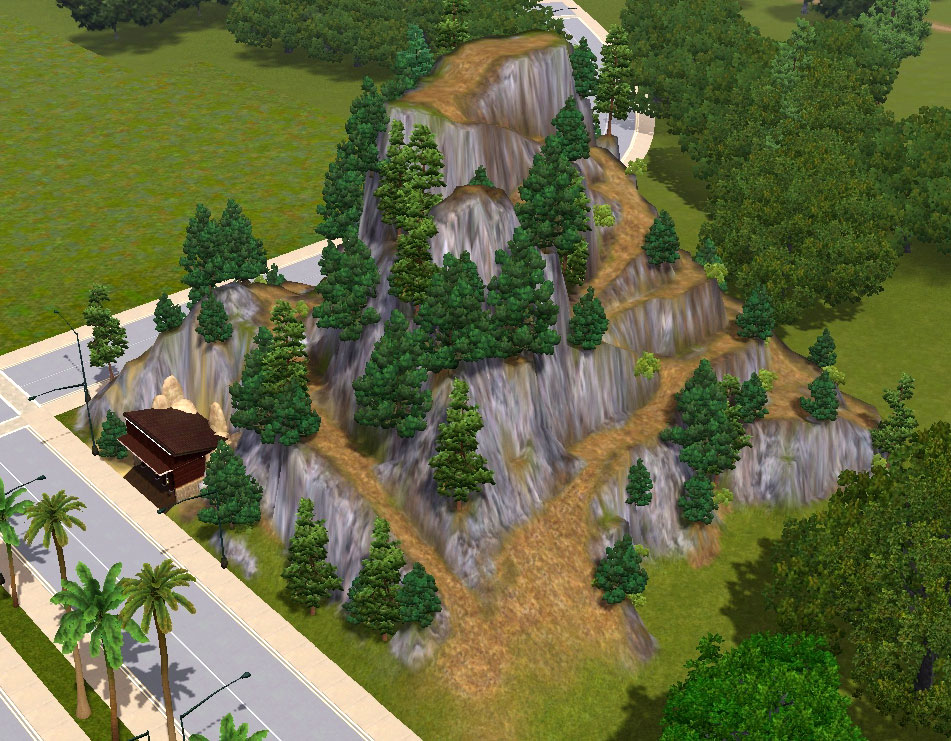 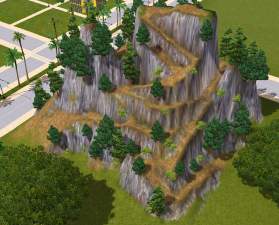 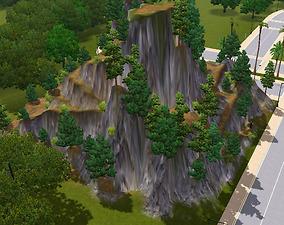 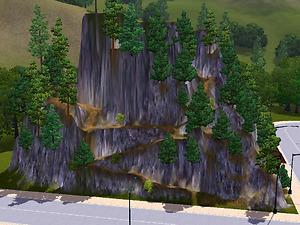 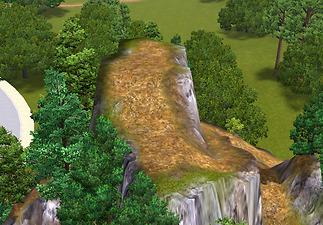 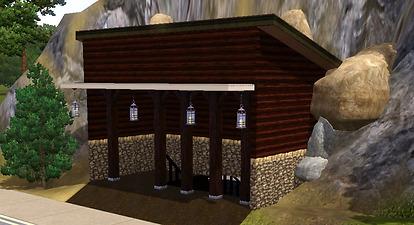 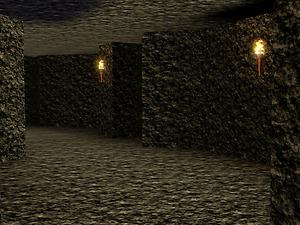 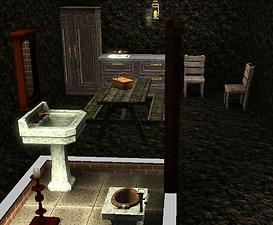 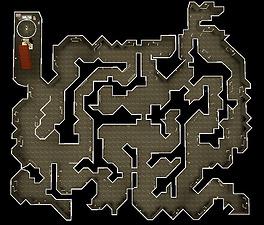 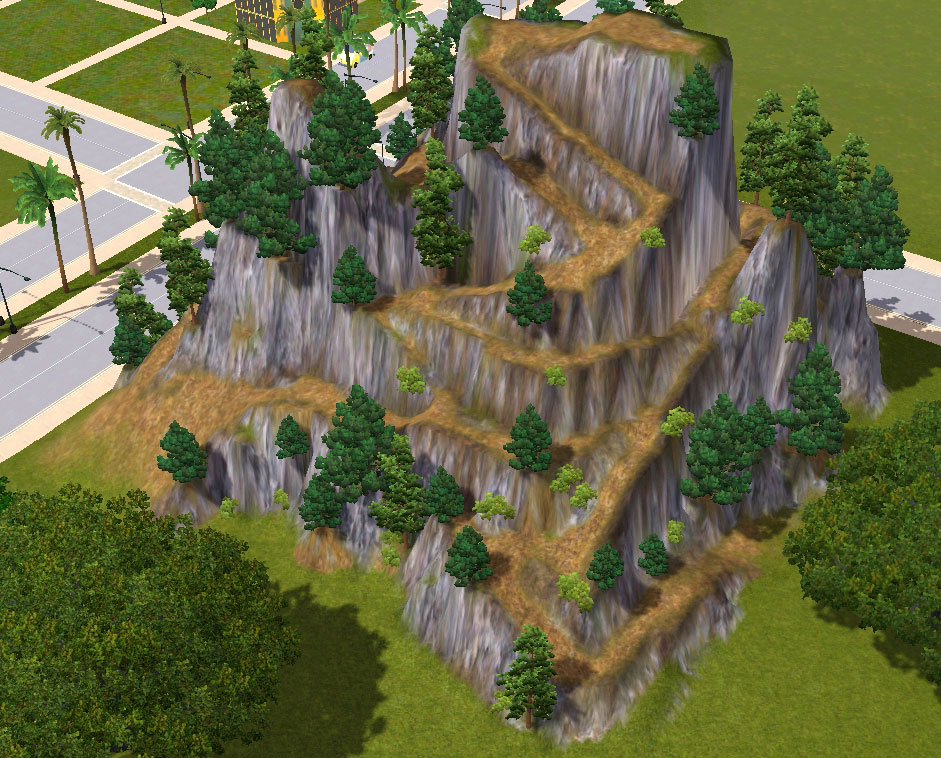 The mountain is lovingly shaped and I have labored on placing those fir and juniper trees on the lot. I have had a very frustrating time with the vegetation since they were constantly "disappearing underground". It is a game glitch that occurs when you place a one tile item on slopes... and evidently even from tiles on the slope that has been flattened. I couldn't do anything to prevent these trees to float above the basement and vanish from the top. All I could do was move them around until none of them visited the dungeons.
The mountain is completely climbable by sims. It has been tested with and without spawners. The routes are clear to the top, and there are several paths your sims can take with ease. 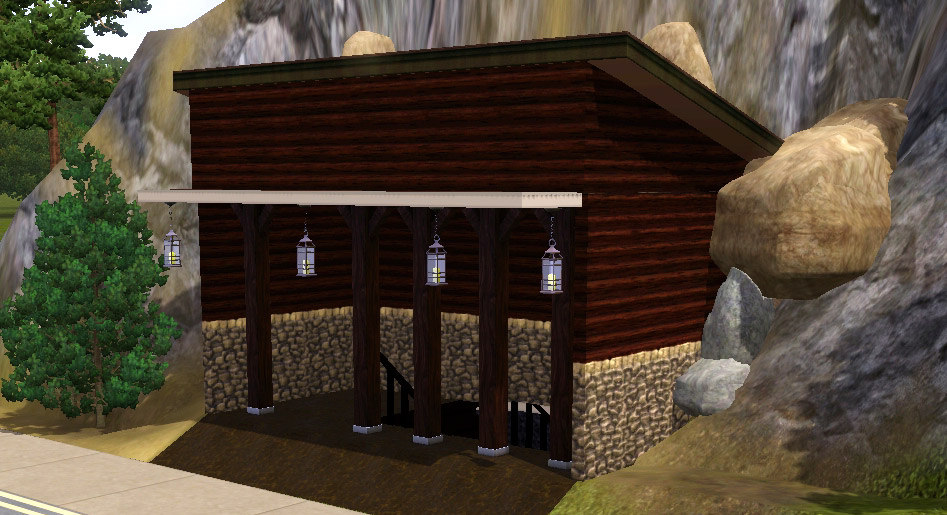 Stairs lead down to the mines, which is an interesting web of tunnels, with torches lighting the way. 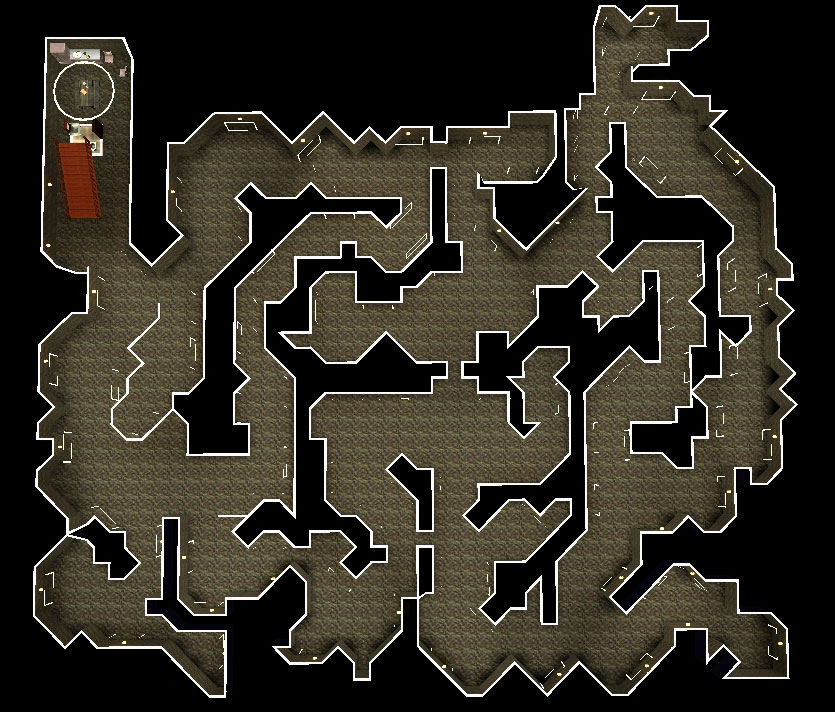 There is an another glitch in the game that stopped me from providing this mountain in full glory. Spawners duplicate themselves while placing the lot in your world, causing lag.

Important! I have not included one single spawner for this reason, that is going to be your job to customize this empty mine.
It is easy enough to do. You bring up the cheat window (control+shift+C) type in "testingcheatsenabled true", enter. Then type in "buydebug on". In buy mode, organized by functions, you'll see a question mark. You will find different categories, amongst others there are metal and gem spawners. Then you can plop one of each down onto your lot as you find it appropriate.

I envisioned placing the meteor and metal spawners on the surface, and gems into the depths of the mountain cave.

The moderator through the uploading process has suggested that I work in a bathroom and add a way to buy dried food. However, I don't like to spawn many of those cashiers around town and went with my idea of a workers' resting area, which is set up at the base of the stairs. 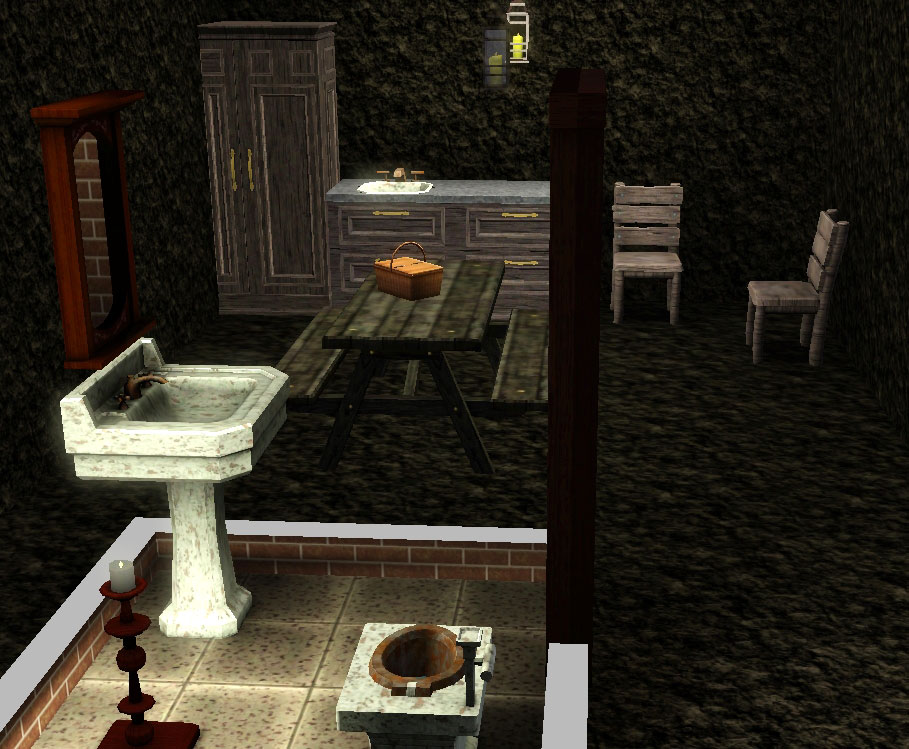 Specifications:
Community lot / no visitors allowed
Lot Size: 50x50
Lot price: $ 55121 furnished, $ 54262 unfurnished
Description:
"This monumental and majestic mountain, once strip mined for its opulent veins of ore, has been abandoned by industry for countless generations. Recently reopened as a public recreational facility, the mighty mountain is once again mined by amateur geologist, archeology enthusiasts and gamblers hoping to strike it rich in the complex catacombs beneath this national treasure."

Contents used:
Terrain paints from World Adventures, you cannot run this lot without it. It will "turn" the lot blue.
The trees, floor/wall coverings, stairs and patterns are base game. Torches and toilet are World Adventure items as well.

I have also used "Rustic columns" and "Caged candles" from Outdoor Living Stuff. Kitchen is furnished with "Twig" chairs from Supernatural and "Cowboy" counters, and refrigerator from Pets. If you don't have these and install the pack the game will replace these items with random ones at loading.

Number of bedrooms:
Not Applicable: For Commercial Lots
Custom Content Included:
None: No Custom Content included
Furnishings:
Unfurnished: Lot is a basic shell with walls, floors, windows, doors, stairs, and landscaping, but does not contain basic fixtures, plumbing, or furniture.
Special Flags:
Not Applicable

Description: This monumental and majestic mountain, once strip mined for its opulent veins of ore, has been abandoned by industry for countless generations. Recently reopened as a public recreational facility, the mighty mountain is once again mined by amateur geologist, archeology enthusiasts and gamblers hoping to strike it rich in the complex catacombs beneath this national treasure.