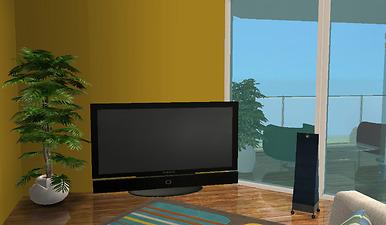 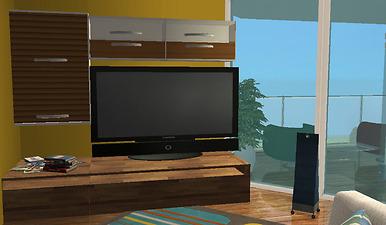 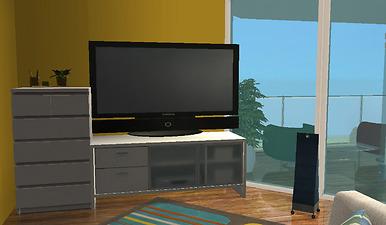 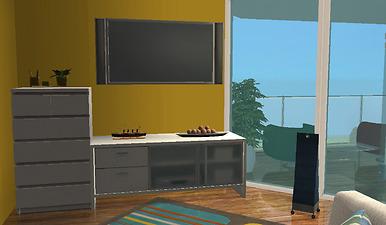 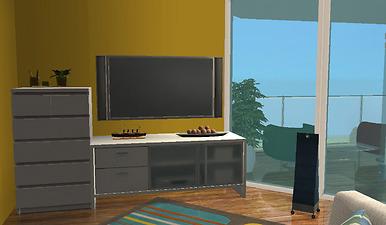 Well I found my old abandoned projects folder, and I can see that there are a lot of people still playing The Sims 2. So I guess this download will serve for a lot of people.

One thing that never looked good was that televisions can't be placed over tables, coffee tables and the like. Which is not much realistic, since every house I know don't have TV's on the floor.

What it does
This mod will include the adjustable height feature included for paintings in AL for all TVs. This includes floor and wall TVs. This obviously means that this mod requires AL to work.

This is a Global Mod and will affect all your TVs including Custom TVs.

I tried allowing TV's to be placed over tables and alike, but there's no way for 2 tiles objects. This was the only way, so it needs a little trick to work.

Usage
To adjust the height is easy. Only use the standard keys for changing the object height as it was a painting ([ and ] for most keyboards). Wall TV's don't need any tweak. But floor tables needs moveobjects on for placing over another object.

If you have a TV that was designed/created to be placed over a specific table and it's already away from the floor, there's no problem it will work same way and mod will allow this TV to be placed directly on the ground too.

Check the images below and see the different living room styles I've made with the same TV in the same room.

Usage Notes
Here are two behaviors I spotted while testing:
Installation notes
I don't know if this is really required, but just as any other mod make it load after loading all the objects. So place in a folder starting with z in your Downloads folder.

Mod Compatibility
This mod is tested to work with:
MogHughson's Watch TV from all chairs mod.

MATY Shiftable Objects mod have two files named shiftwallTV.package and shiftSwingarmTV.package. You can delete them, they don't conflict with my mod, but they are useless. Difference is MATY mod do locally, affecting only Maxis wall TVs, while my mod do globally affecting all TVs.

I haven't tested with other TV hacks but looking what they do, probably no incompatibility. But if you do see any, just add a comment and I'll work in adding compatibility.

If you're working in another mod, here are the affected BHAVs:

Additional Credits: SimPE and everybody that helped it
MTS and all it's community
Echo and lot of BHAV masters
Other Information