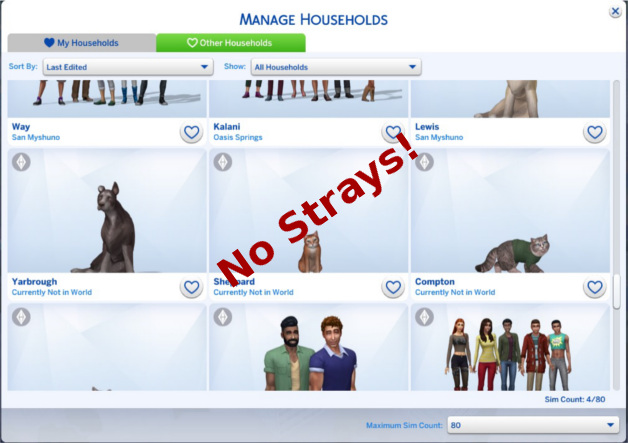 208 Thanks  Thanks     52 Favourited
I noticed with the addition of Cats & Dogs that the random household generation went absolutely insane. My game is heavily modded, I like to keep a fairly tight reign over my little worlds. That being said; the generation of a boat load of single pet households (only pets, mind you) was not only getting on my nerves, but also restricting the number of human sims being born. Population cap, gotta love it, at least until EA decides to write code to overload the game with a zoo. I love pets, don’t get me wrong, but the ratio needs to be better controlled.

Anyway, I started poking around at the pet tuning files and edited the ones that control stray generation. Unfortunately, there is no way to just reduce the number of stray households generated. I have only been able to stop that generation completely. This actually works for me as I would rather create my own strays. I played the game for a few days with the mod in place, to be sure it wasn’t conflicting with anything. It seems to work perfectly. There are no more random stray households being generated in my game. I did not touch the ghost pet tuning as that would prevent the return of ghostly pets. I know some of you like to have your deceased furbabies return to you (and they will with enough time).

What this mod does: Completely eliminates the random generation of Stray Cat and Stray Dog households.

Let me know if there are any problems.

Will conflict with anything that alters these files: