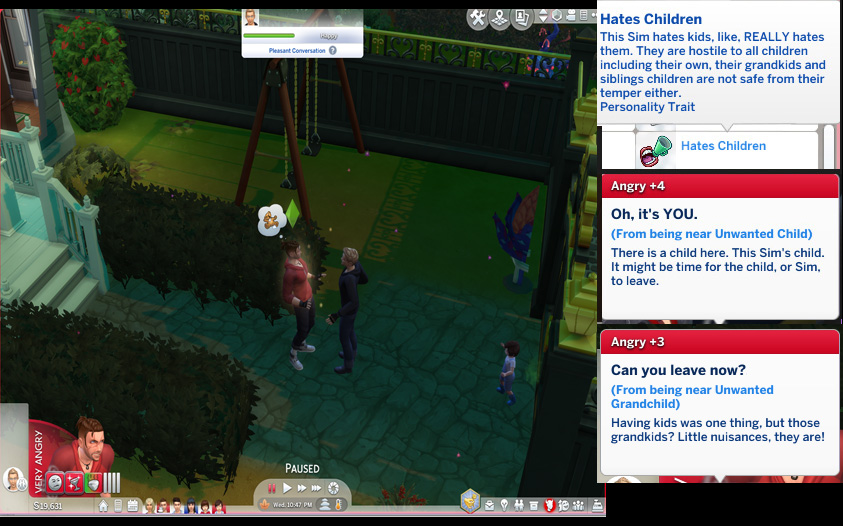 Created by Zuperbuu
View Policy / About Me View all Downloads
Uploaded 30th Jun 2018 at 4:03 PM
Updated 1st May 2021 at 10:38 AM by Zuperbuu : Patched for April 2021. New "Try For Baby" changes!
PLEASE READ
I, unfortunately, do not have time to continue actively working on this mod. I will update it to work with patches when I can, but it will no longer be expanded upon by me. If you wish to take what tweaks I have done and put them in something else, then go for it!

I am aware of the changes ea have made to the trait regarding "try for baby", which I find problematic, so I have now changed how "try for baby" is handled slightly.

There are two files, only pick ONE: one where it is impossible to get a hates children sim to try for baby, even if they're dazed they will always reject it, and another file where I didn't make any changes to the try for baby part. I did not make changes to the COmmitment Issues trait because this mod is exclusively meant for Hates Children.

UPDATED TO WORK WITH THE APRIL 2021 PATCH.

What's this?
The Sims 2 and 3 gave us a variety of different Families and how they would behave with one another, from playful and adoring parents (Family orientated), to normal alright ones (No family trait) all the way to cruel and dark ones (Hates Children). You could mix and match parents with these traits and get some really interesting and dramatic stories, but the Sims 4? It fails to address the opposite side of the perfect parent.
At present, Parents are either Goody two-shoes or amazing at meeting their childs needs, and always feel good about everything that happens involving a child...including those with the Hates Children Trait! This system is wrong. We lost our diverse family stories! It has become clear EA/Maxis will not be fixing these issues themselves, so you're stuck with me and my amateur programming!

I would recommend using this Trait alongside the original Hates Children, as I can't quite get all the features I want from Hates Children into a new trait, or vice-versa.
You can find the Trait in CAS under "Personality - Lifestyle".

NOTE: Please use WinRAR to extract the files if you encounter difficulties using winzip!

What it does so far

This mod is built into a trait right now and does the following:

1. Sims will get an angry moodlet around their own kids. They also nab an angry moodlet around their grandkids, and even around nieces and nephews. If they are a caregiver, they also get angry moodlets because hey, it's still a child they're caring for. Beware that these stack, so a sim can become enraged very quickly and might have a heart attack.
2. Sims will get the "Ugh! Toddlers!" and "Ugh! Children" buffs with the Hates Children trait, even around their own children! You can make a really angry parent by using the original Hates Children and this additional trait together.
3. It will be 100% impossible for a Sim with Hates Children to be coerced into "Try for Baby" if using my "NoTryforBaby" file.

What is to be added

(NO TIME TO WORK ON RIGHT NOW)

1. A mood scrubber, so that no happy buffs associated with being a caregiver appear.
2. Sims with Hates Children will always reject feeling a pregnant sims belly.
3. Your Sim can opt-out of being a caregiver, even without using the trait.
4. Blocking advice chance-cards, added by the Parenthood DLC, to those with this trait (or at least give them the option to make no selection).
5. Allowing adult sims to smash kids projects added by Parenthood DLC.
6. Disabling Parenting Skill for those with Hates Children so they never obtain it.
7. Replacing the buffs added by the social worker removing toddlers/children, so Hates Children sims are happy by it instead of upset.
8. Caregivers will no longer be psychic and will need to be in the same room as a toddler to know that it needs feeding. (Maxis finally did this!

)
9. Turn off the random "check toddler" and "watch toddler" autonomy. This feature is dumb and promotes lazy parenting. (Again, Maxis finally fixed it!

)
10. Allow sim teens, and adults, to fight on command, rather than making it randomly trigger from negative interactions.
11. Giving teens, who have a despised relationship with both parents, the chance of moving out to live with someone else they know very well.

This mod is meant to make parenting more difficult and realistic; no more psychic parents, no more perfect happy families all the time, more dramatic interactions, give mean sims more purpose in life, and no more autonomy for childcare on sims who Hate Children!

The dreaded Last Exceptions! I see them now and again, but I don't know what part of my mod causes it because I am still learning how programming and script-modding works, so whilst I will look at the logs you give me I don't think I will be able to understand them, but with enough time looking at them it will help me figure out what might have gone wrong. I am working on this project alone, so any outside help is appreciated.

This mod will not work with other mods that alter the Hates Children Trait. Tested with Parenthood DLC, and appears to function as normal.

The only files modified in the original mod are the trait_hateschildren(hidden) and trait_hatestoddlers(hidden) to make it so users of the default Hates Children Trait can still get the negative moodlets/buffs associated with the trait when around their sims own children. I modified all the mixer_social_TryForBaby_Targeted_Romance_Transition(location) in the "NoTryforbaby" version of the mod, to remove Hates Children from the only variable that would have made them agree to it, which formerly required them to be dazed (without this variable, there is 0% chance of success trying for baby the vanilla game way with a Hates Children sim).

For those who want a more angry sim, that really hates kids, I recommend using my modified trait alongside it with a multi-trait mod.
Other Information

These Sims do not like children of any age, including their own kids and extended families kids. They do their best to avoid parenthood.
Ages:

You should not be my problem.
(From Hates Children Trait)
What's worse than having kids? Looking after someone elses.

Oh, it's YOU.
(From Hates Children Trait)
There's a child here. This Sim's child. It's time for that child to leave.

You weren't invited.
(From Hates Children Trait)
Sometimes a Sim wants to see their family, but that doesn't mean they want to see their kids.

These Sims do not like children of any age, including their own kids and extended families kids. They do their best to avoid parenthood.
Ages:

You should not be my problem.
(From Hates Children Trait)
What's worse than having kids? Looking after someone elses.

Oh, it's YOU.
(From Hates Children Trait)
There's a child here. This Sim's child. It's time for that child to leave.

You weren't invited.
(From Hates Children Trait)
Sometimes a Sim wants to see their family, but that doesn't mean they want to see their kids.

Can you leave now?
(From Hates Children Trait)
Having kids was bad enough, now there's kids of the kids. They should all be on their way.

I like to fix what already exists in the games, or to add character mods from my own original books. I am new to programming, so expect bugs and slow updates.