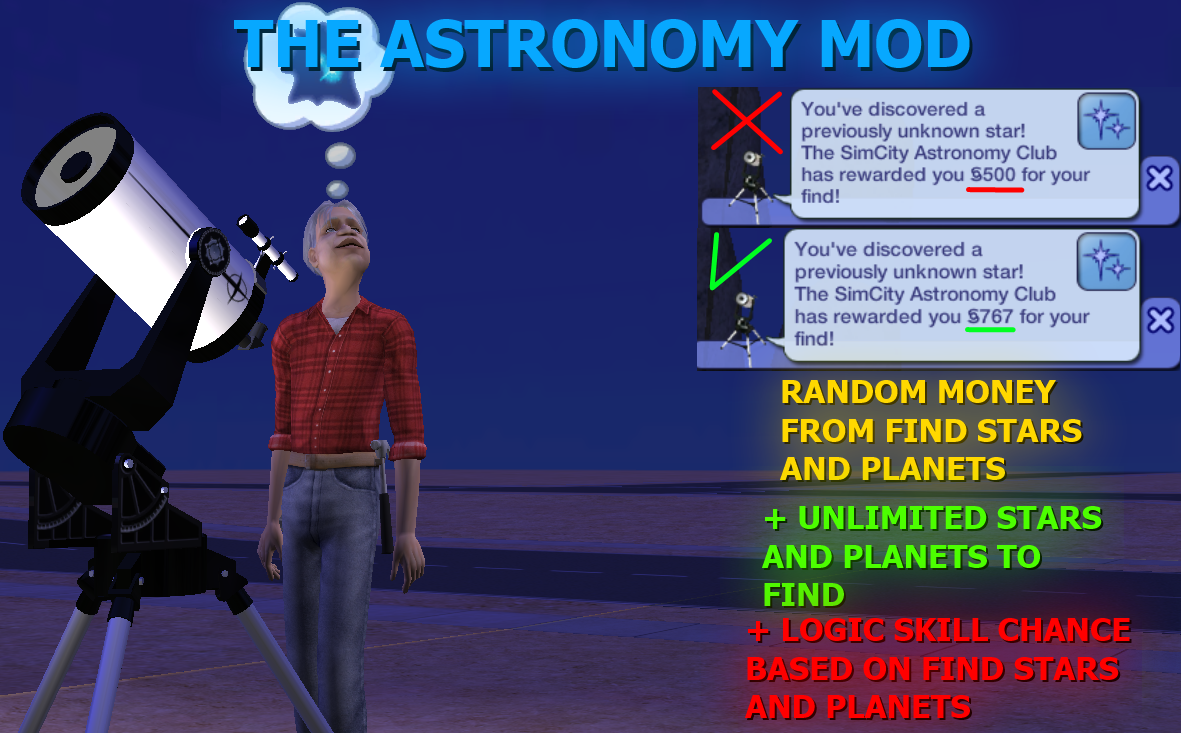 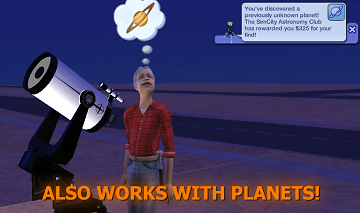 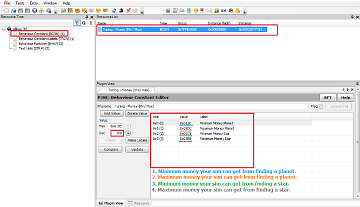 237 Thanks  Thanks     32 Favourited
I've been looking through the forums, more specifically on the WCIF section, to maybe find a new idea for a mod, and then someone(name on the credits) bringed the idea for a mod where you can get random money from finding a star or a planet, and the chance of it happens were based on the sim's logic skill.
So, i took the challenge, and now i introduce to you, the mod i called The Astronomy Mod !

This mod makes Astronomy more fun and dynamic, by:

Allowing you to find more stars and planets

Make you get random money from finding a star or a planet, instead of just $500

And makes the chance of finding a star or a planet be based on the sim's logic skill hability!

So, it provides more dynamism to it!

Basically when your sim uses a telescope there's a random chance of he find a star or a planet(depending on the action), and your sim gets a certain random amount of cash from finding it, being it low or high depending on the find! And the much logic skill your sim gain, more chance he will have to find more stars and planets!

Do i have to install all the 3 .packages?

No, you must select just one of them, each package has a specific function and overrides the same resources! So, you can just have only one installed to not cause conflict! Here how they works:


Cool, but i want to change the amount of cash they get. How do i do that?

The First One holds the minimum money your sim can get from finding a Planet.

The Second One holds the maximum money your sim can get from finding a Planet.

The Third One holds the minimum money your sim can get from finding a Star.

The Forth One holds the maximum money your sim can get from finding a Star.

Here's a image explaining the process:

After you have done all the changes you wanted, just click on Commit File button to save it! :P

Here it is a table with all the details of the used resources:

This game may cause conflicts if there's a mod that overrides one of the functions below mentioned, but i haven't found any mod that may cause a conflict to it!

Also, a conflict may happens if you install all the 3 packages instead of 1, as i mentioned before.

No bugs found so far! If you find any, please tell me!

Additional Credits:
Goldenbtrfly for the idea! Thanks! :D SimPE My sim character that got abducted over 3 times during the tests!