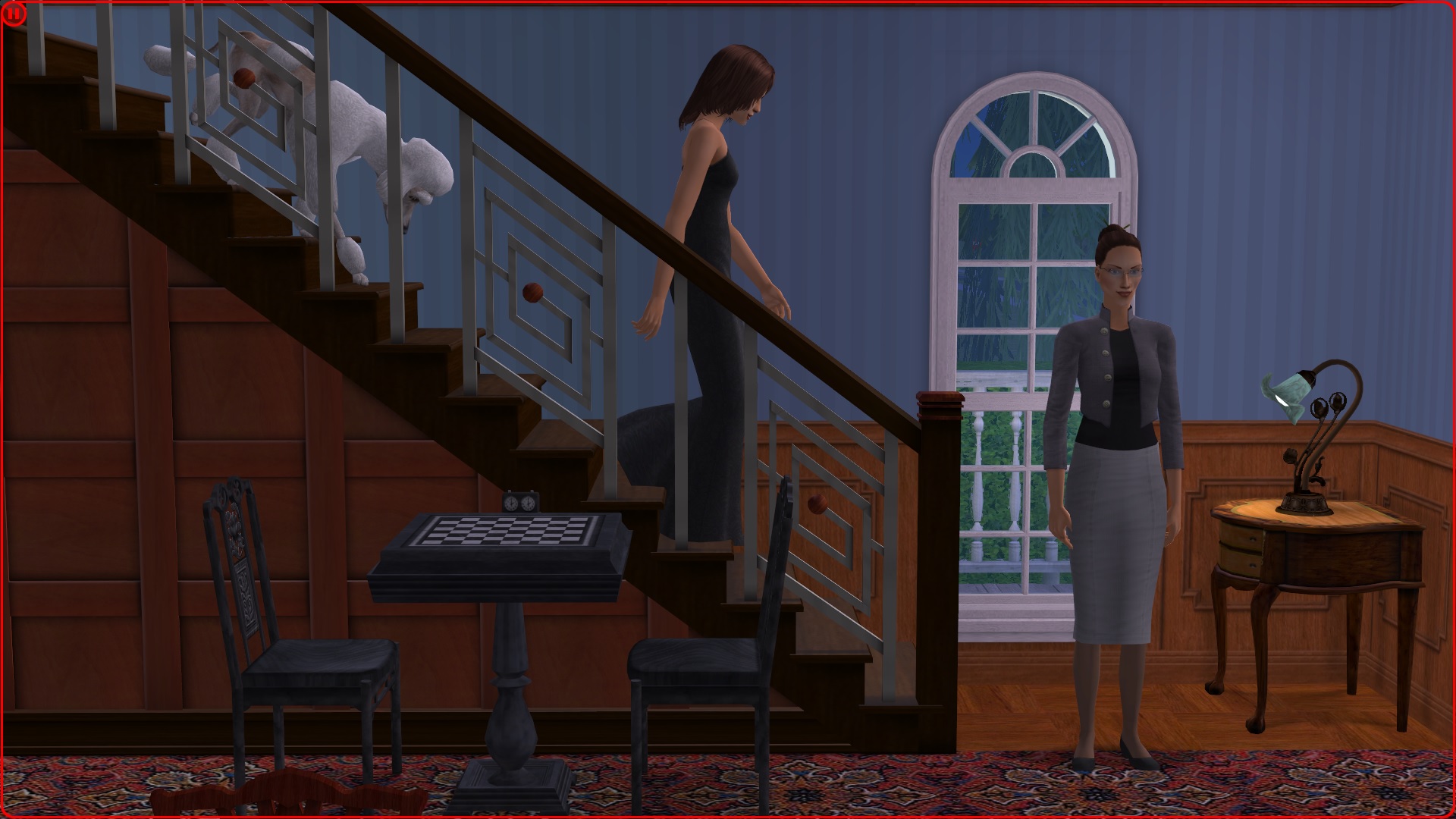 Stair Straight Mod: This mod allows multiple sims to use regular, straight stairs. In an unmodded game, only one sim can use one side of a regular staircase. Maxis attempted to make it so that sims would be able to wait in queue, but this only partially works if the sim is attempting to descend. Even then, if the sim attempts to ascend or descend while another sim is already using the stairs, the sim throws a route failure tantrum. This mod fixes all of these issues. However, there are a few things that had to be done in order to account for certain special features of regular staircases.
- Elders and adults walk at different speeds on regular staircases, . This mod makes it so that if the staircase is already being used, then every new sim who starts using the stairs will ascend or descend at elder speed, because otherwise they walk through elders.
- If a sim is running, and if there is another sim using the staircase, the new sim will always walk, and will continue running, if need be, after they ascend or descend. Otherwise, sims would run through walking sims on the staircase.
UPDATE 1: This is a very important update that adds new features and checks. Also, I realized that sims do walk at different speeds on all types of stairs depending on age, not just on regular staircases, which causes non-elders to sometimes go through elders on spiral stairs from Apartment Life. It looks like Maxis copied the code from regular stairs into spiral stairs, and didn't bother adding any checks. This mod currently only affects regular stairs. .
- When a sim is trying to use the stairs, if all the other sims on the stairs are running, then the game will allow the new sim to run, too.
- When a sim is trying to use the stairs, if an elder sim is already using the stairs, if neither the new sim nor the elder is running, or if both the new sim and the elder are running, then the game will make the new sim use the stairs at elder speed.
- Here is the most important new feature: if after using the stairs, multiple sims end up on one single tile (mostly happens if you order them to the top or bottom tile of the stairs when free will is off), then the game will now try to find a suitable spot for the sims nearby and set their location there, just like it does with spiral stairs. Otherwise, it was possible for sims to end up stuck and unable to route.
UPDATE 2: Fixed an oversight from the previous update. I have also released an edited version of Marvine's Ladder that prevents sims from going through each other with this mod. Sims who are trying to go in the opposite direction will wait for others to finish using the ladder just like Maxis' spiral stairs from Apartment Life. Pets cannot use this version, because they don't have any animations. You need Stair Straight Mod in order to use this edited version of the ladder.
UPDATE 3: There was a rare situation in which a non-elder sim who was about to start to use a staircase would be allowed to move at non-elder speed even though there were other non-elders who were currently using the stairs at elder speed, because there was an elder sim on the stairs when they started using the stairs. This update fixes that. I have also updated my edited version of Marvine's ladder with this new fix. I have also released an edited version of Salix's ladder, which is a clone of Marvine's ladder, and sims will now wait if there are sims using these stairs in the opposite direction. You can get more recolours for these stairs by RocketHorseSims here.
UPDATE 4: There was another case in which sims would not consider the ascending/descending speed of other sims, which would cause them to go through each other. This should finally be fixed. I have also updated Marvine's and Salix's ladders with this new feature.

Note: If you have Marvine's Ladder, then sims will ascend and descend through each other if sims are going in opposite directions. Normally, one would only allow a sim to use that ladder if all other sims are also going in the same direction as the sim who is considering to use the ladder, just like Maxis' spiral stairs from Apartment Life. However, the ladder is cloned from regular stairs and it doesn't have this feature. The ladder would have to be modified quite a bit to add this functionality. So, sims going in opposite directions will go through each other on the ladder if you have this mod and the ladder at the same time. Edit: I have now released an edited version of Marvine's and Salix's ladder that prevents sims from going through each other with this mod. Sims who are trying to go in the opposite direction will wait for others to finish using the ladder just like Maxis' spiral stairs from Apartment Life. Pets cannot use this version, because they don't have any animations. You need Stair Straight Mod in order to use this edited version of the ladder.

Stair Modular Pets Fix: This mod fixes an issue in the game which prevents large dogs from using two-step modular stairs. Thanks to CharlieSiedjan and CatherineTCJD in the comments section informing me of this problem. Note that I believe the only way to get two-step modular stairs in the game is by following this tutorial, or you can download houses already built using this method.

Stair Modular Sim Run Fix: This mod fixes another issue I came across in the game which makes sims who run up (not down) a two-step modular stair play the final step ascending animation twice. This mod fixes this issue.

Stair Spiral Mod: This mod adds some interesting features to spiral stairs. I mentioned in the description for Stair Straight Mod that Maxis simply copy/pasted the code from straight stairs into spiral stairs and didn't modify their code enough for the unique features of spiral stairs. In an unmodded game, sims can go through elders on spiral stairs, because they don't consider the speed of other sims using the stairs. In addition, the most annoying thing about spiral stairs is that sims can't run up or down these stairs and it takes them forever to go up or down multiple floors. This is most noticeable when firefighters are trying to get to an apartment 5 floors up which can only be reached through spiral staircases. This mod fixes these issues. Sims now care about the speed of other sims on the stairs and won't go through each other. In addition, sims who are running will actually run up and down spiral stairs now.

Stair Spiral Slide Fix: This is a separate mod that fixes a very annoying issue with spiral stairs. Sometimes, when children or teens slide down a spiral staircase, they have the potential to cause the stairs to become unusable. Sims who try to use such a stair end up entering a loop where they wait and fail to use the stairs over and over. This mod should fix this issue.

Requirements: Probably Pets or later, but I can only guarantee the mod will work properly if you have Apartment Life and/or M&G.

Title: Just a ladder - by Marvine

Just a ladder - by Marvine

Title: Just a ladder - by Marvine

Just a ladder - by Marvine