Give Me Some Talent 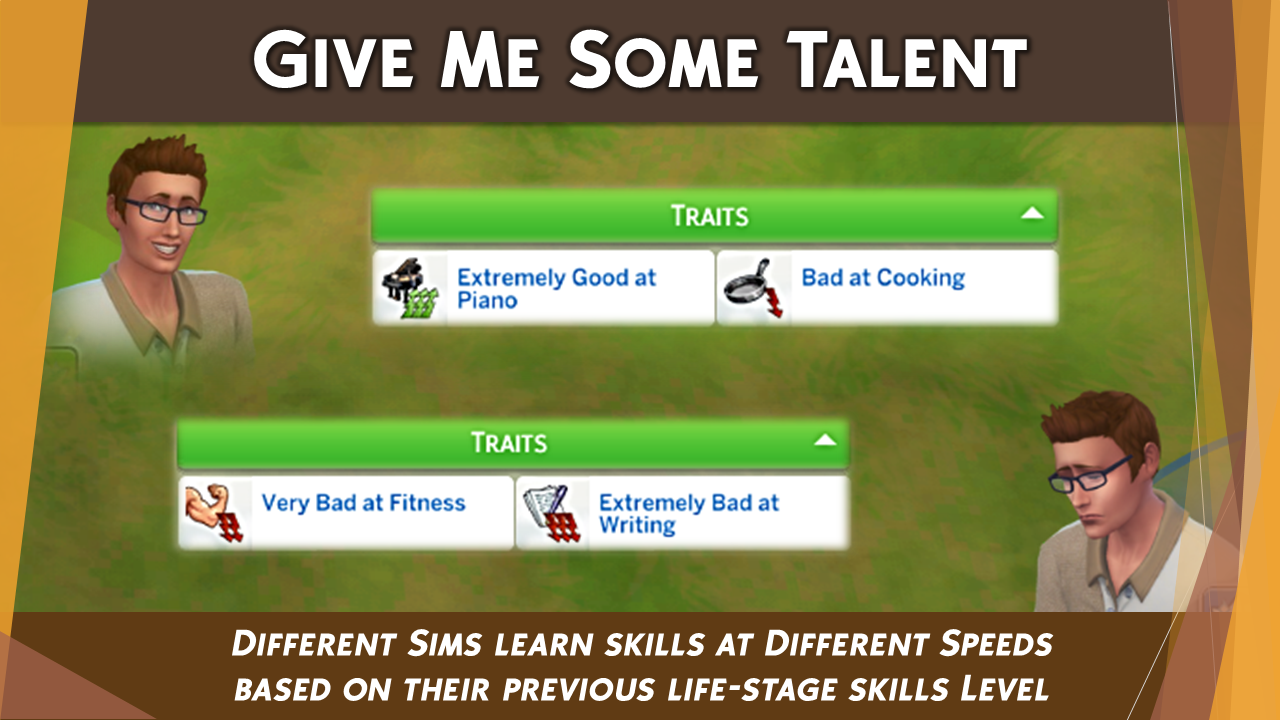 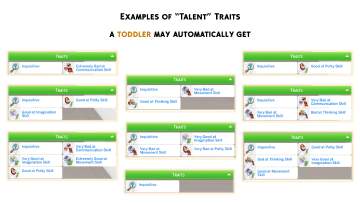 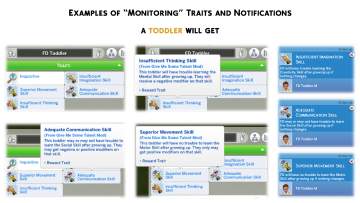 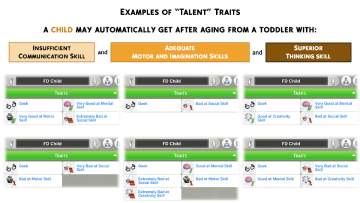 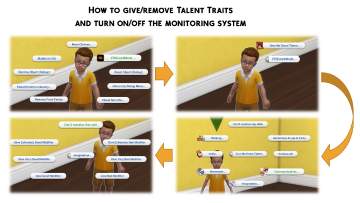 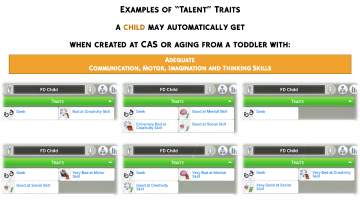 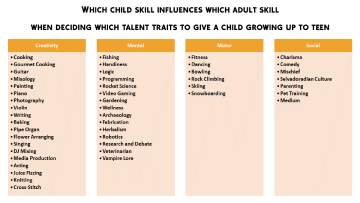 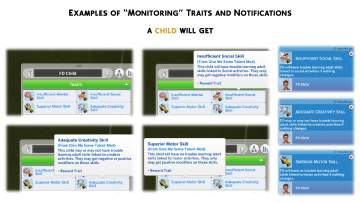 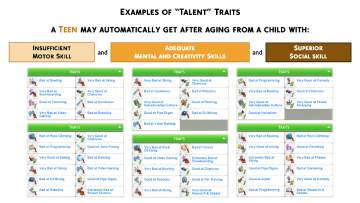 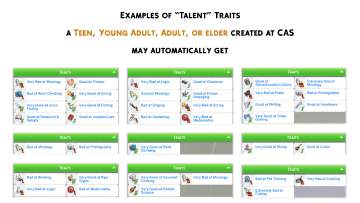 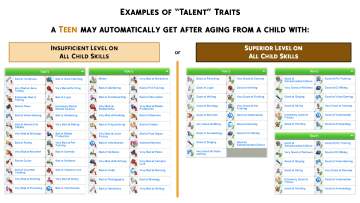 This mod adds more than 120 new traits that make sims learn skills faster or slower than usual. A sim will get them based on their previous life-stage skills level. So, toddler skills define how much faster (or slower) a sim will learn child skills. In its turn, child skills are important to determine which speed a sim will learn teen/adult skills.

This feature only applies to played sims. Unplayed ones will randomly receive talent traits independently of their previous life stage skills levels.

All toddlers, and sims created at CAS, also randomly get some traits that make them good or bad at some skills. The same occurs for all sims created before this mod is installed. You can remove any talent trait you automatically received by this mod. You can also manually give any trait you want.

There are six talent traits (or modifiers) associated with each skill a sim can learn. They make a sim extremely bad, very bad, bad, good, very good, or extremely good at the skill they’re linked to. The good the trait, the faster the sim learn the skill. The bad the trait, the slower a sim learns it.
As you can see in the picture below, all toddlers (created at CAS or aged from baby) may get some talent traits that make them good or bad at toddlers’ skills. This process is random, so a toddler may get only good traits, only bad ones, both types, or none of them. The chance of a trait being selected depends on its intensity. The higher it is, the lower the probability. Thus, extremely good or bad traits are less likely to be chosen than the “very” ones. Those, in its turn, are less probable to be chosen than the talent traits without an adverb. Traits with the same intensity have the same probability independently of their type. For example, a toddler has the same chance to get a “very good” or a “very bad” trait. 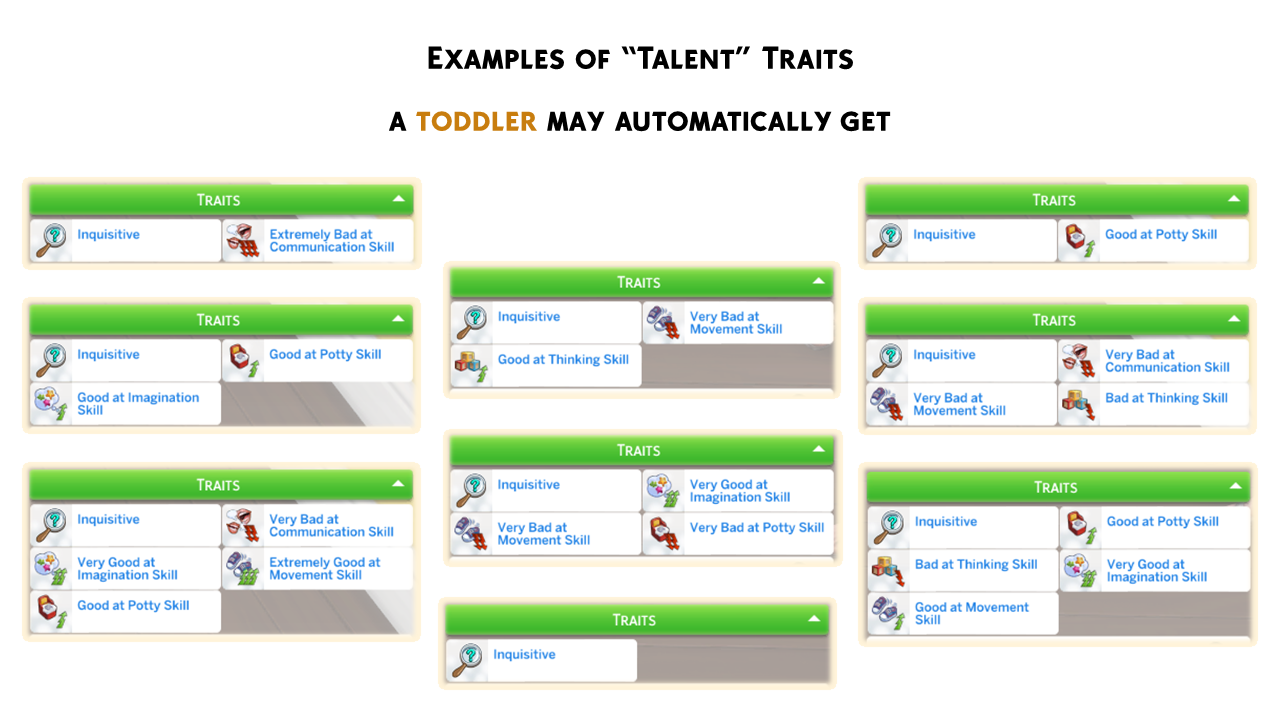 Besides the talents traits, all played toddlers will receive a monitoring trait. Each of them is linked with a toddler skill (except the potty one). They show whether the toddler will be good or bad at learning the child skill associated with the monitored toddler skill. To do that, they have 3 stages that indicate if a toddler’s skill level is insufficient, adequate, or superior. As explained in the trait text:A toddler will only have a superior level in a skill when reaching level 5 in that skill. An insufficient level means a skill level lower than 3. You’ll get a notification when a skill change from one level to another. Please, notice that the status update and its consequent monitoring trait change take some time to be executed. So, for example, if you age up just after increasing a skill from 4 to 5, you may not be judged as a superior level on that skill.

Strictly speaking, each toddler skill level counts to define each talent trait a sim will get after growing up. For example, a toddler with movement skill at level 1 and another at level 2 will have an insufficient level on that skill, but the first one has more chance to get an extremely bad modifier on the motor skill than the second.
In the following picture, you can see some examples of traits received when a toddler grew up to a child. A bad talent trait in the social skill is present in all cases because the toddler had insufficient communication skill. In most cases, a good talent on the mental skill is present because of the toddler’s superior thinking skill. Bad and good modifiers on creativity and motor skills sometimes appear because our test toddler had adequate imagination and movement skills.

You can turn off (or on) the monitoring associated with each toddler skill. To do that, click in a Sim (holding shift with “testing cheats” enabled), find the FDSims4Mods Menu, choose the Give Me Some Talent Mod button, choose the skill you want, and click the “Don’t monitor this skill”. You can also turn off (or on) all of them together. Finally, you can also give or remove any talent trait you want. In the example below, you can see that only Imagination Skill monitoring remained on.

As occurs with toddlers, all children in the household will receive a monitoring trait that tells the monitored skill’s current status (insufficient, adequate, or superior). You also will receive a notification when this status changes.

Having an adequate level in a skill means having it between levels 3 and 8. A sim aging with a child skill in this range may get good and bad talent traits in the adult skills linked to it. If the child skill is under level 3 (insufficient range), they only get bad traits. If it is higher than 8 (superior range), they may only get good talent traits. Below, you can see some examples of talent traits obtained when a child grows up having adequate mental and creativity skills, insufficient motor skill, and superior social skill.

A game standard feature is that a child can learn some adult skills linked to a child skill after reaching level 10 on it. So, this mod will give adult skill talent traits related to a maximized child skill when it occurs.
You can turn off the monitoring of each child skill individually for any played sim you want. To do that, click on the sim holding shift (and with testing cheats enabled) and found this mod sub-menu inside the FDSims4Mods menu. Beware that sims will gain talent traits as if they are created at CAS when the monitoring system is off.
Teen to elders sims created at CAS will gain talent traits as if they have an adequate level in all child skills. Below are some examples of talent traits obtained in this situation.

As already said, you can remove or give any talent trait you want for any played sim of any age using this mod cheats options.

This mod comes with some optional features that make the game fit better the idea that skills are linked with their previous life-stage counterparts. Below, you can see a short general description of the optional features of this mod.
It doesn’t make sense a child can learn bowling without motor skill. To solve that problem, this mod (through an add-on) applies the same procedure used on other adult skills that a child can learn (like fishing). In this way, child sims will only learn bowling after maximizing the motor skill. As you can see in the names of add-ons files, other skills pass through a similar process (changing only the child skill they’re linked to).
Since a child learns video game skill after reaching level 10 in mental skill, playing video games should increase the mental skill instead of the motor one.
As said in its description, the mental skill is strongly linked to logical activities. Talking with dead people seems more a social activity than a logical one. So, now, a child sim will gain social skill (instead mental) when using the seance table. Moreover, they only start to gain the medium skill after maximizing the social skill.
Having a child with a superior level in all skills should be a rare situation, as is having one with an insufficient level in all skills. So, this mod makes learning toddler and child skills harder to make growing up a kid (or a toddler) with a superior level in all skills challenging. In this way, you will take much more time to reach high levels than before the mod installation.

As you can see in the .package files’ names, only the optional add-ons override some XMLs. They only override features linked to the activity they modify. For example, the add-on that makes bowling gives motor skill overrides XMLs associated with the bowling feature. Avoid using these add-ons with other mods that override the same features.
You don’t need any Kits, Expansion, Game, or Stuff Packs to use this mod. However, if you install any package linked to an expansion, you will get talent traits of skill you cannot learn.

IMPORTANT: This mod requires Scumbumbo’s XML Injector Script Mod to work. If you don’t have it, you can download it at his Memorial webpage (www.scumbumbomods.com/xml-injector). You only need the script mod (the “.package” file isn’t necessary).


At this moment, this mod is only available in the following languages:

So, when using the game in another language, some parts (that uses text from the game) may appear in the desired language. Still, some text (those included by this mod) will appear in English.
If you are interested in translating this mod, please contact me. I can help you. When translating this mod, don’t forget to write that you did the translation in the text inside the “about this mod” button (string 0D735031).

You must install the “.package” file with “BASEGAME” in its name and those with the expansions names you have.
After installing a new expansion, install the complementary mod file linked to this expansion. After doing it, you will get retroactive talent traits linked to the DLC you installed. For example, after installing the bowling expansion (and its mod file), your sim may get bad bowling talent traits if they had insufficient motor skill when they grew up. This will occur even if your sim was already an adult when the expansion was installed.

Other Information
Type:
– Skilling
– Other
Tags