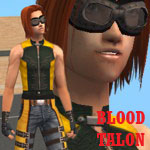 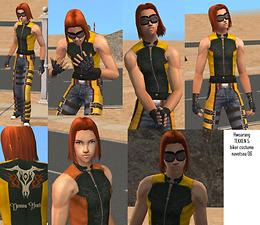 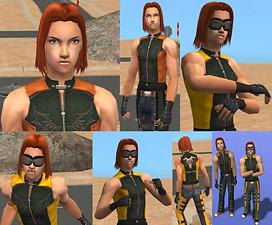 296 Thanks  Thanks     12 Favourited
Picked Upload! This is a picked upload! It showcases some of the best talent and creativity available on MTS and in the community.
Hwoarang, in his tekken 5 biker outfit.
I give you both yellow and orange version ^_^ man isn't I very generous??

Hwoarang yahh... he is one of the "popular guys" in fighting games history
he has succesfully gathered female fans around the world,which most of them might not even like playing fighting game.

since some game developers like SNK, and namco are mostly producing fighting game titles,
there is no other way for them than to beautify one of their characters to gain some extra market among female
gamers through its merchandises, resin figures, posters, etc.

Now, since I believe more than 50% of the population here are female, then I'm SURE he would be loved... ^_^; haha

and obviously it's not included

in the screenshot, I changed his body to "fit" before taking photos,
so you need to spend sometime in the gym (or cheat), to have that muscular arm

now I present you this oh so so hensem gang leader, ex-army, fugitive, crazy taekwondoin, Blood Talon aka Hwoarang...bleh ^_~;