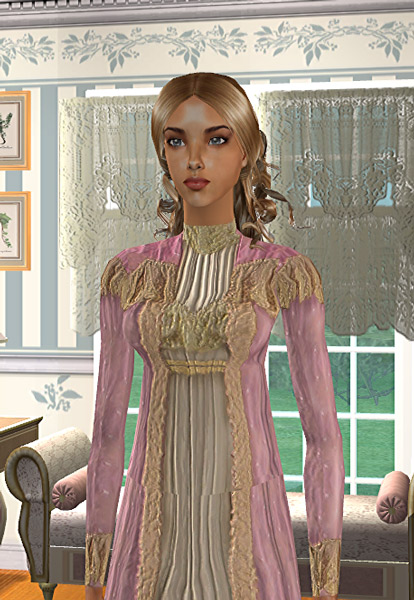 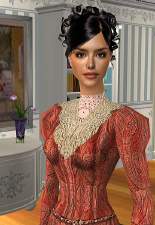 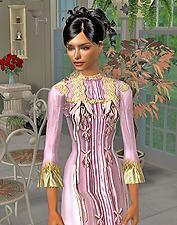 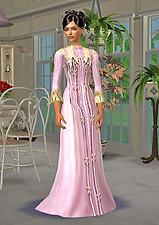 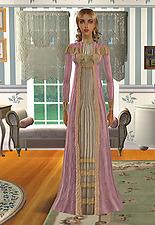 382 Thanks  Thanks     42 Favourited
This is a new mesh recolour, and means that you will need to download the particular mesh itself in order for this to show up in your game. See the Meshes Needed section or read the text for more information.
Hi!

We finally came to my favorite fashion era. The end of the 19 century /beginning of the 20th.
So, I'm planning on making a Huge set. These clothes are the very first upload. And I'm starting from the begining: at home.

Hope you like them and keep comming back as I'll be uploading a lot more on this theme.

The French called the era from 1890 to 1914 La Belle Époque. It was an epoch of beautiful clothes and the peak of luxury living for a select few - the very rich and the very privileged through birth

During the last 2 decades on the 18th century, trains were made popular again and fell either to the side of a gown or to the back .Waistlines began to dip; skirts went straight to the floor and were decorated only by pleats, embroidery or ruffles, depending on class, of course. Bell sleeves gave way to puffed sleeves which ended in tight cuffs at the wrist. Waistlines were cinched with belts or tight jackets, and large bustles gave way to smaller ruffles or gathered material at the back. At the end of Victoria's reign, gowns showed off a slightly more natural female form

The Gibson girl made its debut in 1890 , making way for a more practical female costume.

The silhouette of the Edwardian Period is characterized by an S-shaped curve with full, pouched bodice, high neckline, and skirt flattened in front with a rounded hipline in the back. Skirts hugged the hip and flared into an upside down tulip shape. The lingerie dress was popular during this period and was made out of soft, frilly fabric. The full bottoms of the skirts are countered by the large picture hats worn atop the pompadour, the popular hairstyle of the day.

Between three p.m. and six p.m. husbands were expected to go out to tea whilst their wives played hostess to visitors both male and female. During this period there was a good chance of romance and sexual intrigue.
Attired in her tea-gown, a soft flowing robe of filmy chiffon or fine silk, trimmed with an abundance of lace and often free of corsetry, the hostess must have been a tempting prospect for many men.
Such loose gowns afforded women great comfort, ease of access and a tremendous sense of femininity.
Little wonder then that whilst hemlines rose and fell the tea-gown, which had appeared in England as early as 1875 lingered on until the 1920s

Additional Credits:
As usual: thanks to all that made this possible - too many to count.