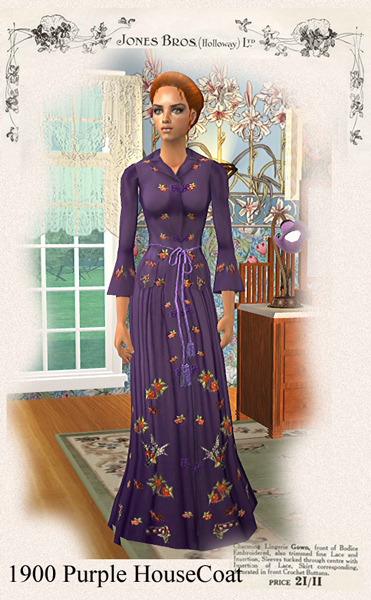 303 Thanks  Thanks     26 Favourited
This is a new mesh recolour, and means that you will need to download the particular mesh itself in order for this to show up in your game. See the Meshes Needed section or read the text for more information.

As promised, here is the very first part of the new set: the period between the beginning of the 20th century and the 1st WW.

It’s a very rich period, full of great evolution and contrast and one of my very favourites.

I begin in the beginning: at home. These are clothes that could be used at home, in the privacy of the boudoir, or even around the house, when there were no visits.

A bit of History:
The silhouette of the Edwardian Period is characterized by an S-shaped curve with full, pouched bodice, high neckline, and skirt flattened in front with a rounded hipline in the back. Skirts hugged the hip and flared into an upside down tulip shape. The lingerie dress was popular during this period and was made out of soft, frilly fabric.
At the turn of the century, tastes in women's fashion began to change slowly from the hourglass shape to the "S" shape, allowing the style of corsets to change from painfully restrictive to more supportive.

The Gibson girl reigned at the beginning of the decade, but by 1909 the empire "directoire" style had replaced her.

By 1909, the S-shape curve was followed by a straighter, more simpler line.. Skirt lengths also began to rise and by the beginning of World War I, they were six to eight inches above the floor.

Hope you like them and don't forget: comments and suggestions are always welcommed.