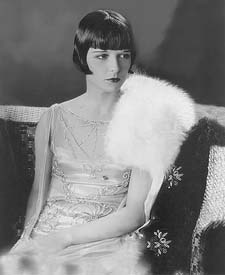 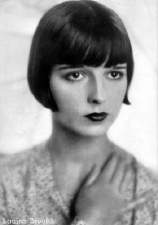 Louise Brooks (14 November 1906 – 8 August 1985) was an American dancer, showgirl, and silent film actress. She became, at the end of her life, a writer and critic of the silent film era.

Signing with Paramount Pictures, where she stayed for most of the remainder of her American film career, her screen debut was in the silent The Street of Forgotten Men, in an uncredited role in 1925. Soon, however, she was playing the female lead in a number of silent light comedies and flapper films over the next few years, starring with Adolphe Menjou and W. C. Fields, among others. She was noticed in Europe for her pivotal vamp role in the Howard Hawks directed silent "buddy film", A Girl In Every Port in 1928.

It has been said that her best American role was in one of the last silent film dramas, Beggars Of Life (1928), as an abused country girl on the run with Richard Arlen and Wallace Beery playing hoboes she meets while riding the rails.

At this time in her life, she was rubbing elbows with the rich and famous, and was a regular guest of William Randolph Hearst and his mistress, Marion Davies, at San Simeon, being close friends with Marion Davies's niece, Pepi Lederer. Her distinctive bob haircut, which became eponymous and still recognised to this day, had started a sensational trend, as many women in the Western world cut their hair like hers. Soon after the film Beggars Of Life was made, Louise, who loathed the Hollywood "scene", refused to stay on at Paramount after being denied a promised raise, and left for Europe to make films for G. W. Pabst.

Paramount attempted to use the coming of sound films to strong arm the actress, but she called the studio's bluff. It was not until 30 years later that this rebellious move would come to be seen as arguably the most savvy of her career, securing her immortality as a silent film legend and independent spirit. Unfortunately, while her initial snubbing of Paramount alone would not have finished her in Hollywood altogether, her refusal after returning from Germany to come back to Paramount for sound retakes of The Canary Murder Case (1929) irrevocably placed her on an unofficial blacklist.

Once in Germany she starred in the remarkable 1929 film Pandora's Box, directed by the respected director G.W. Pabst.
Brooks plays the central figure Lulu, who meets her fate at the hands of Jack the Ripper after a series of salacious escapades. This film is notorious for its frank treatment of modern sexual mores, including the first screen portrayal of a lesbian. Louise then starred in the controversial social dramas Diary Of A Lost Girl (1929), also directed by Pabst, and Prix de Beaute (1930), the latter being filmed in France, and having a famous, but mesmerizing, shock ending. All these films were heavily censored, as they were very "adult" and considered shocking in their time for their portrayals of sexuality, in addition to being highly critical of society. Although overlooked at the time because "talkies" were taking over the movies, these three films were later recognized as masterpieces of the Silent Age, with her role of Lulu now regarded as one of the greatest performances in film history.

Additional Credits:
You'll need the mesh found here:
(http://www.all-about-style.com/zip/FA20dress7_AAS.zip)
It's the red sequin dress, three rows down, in the middle.