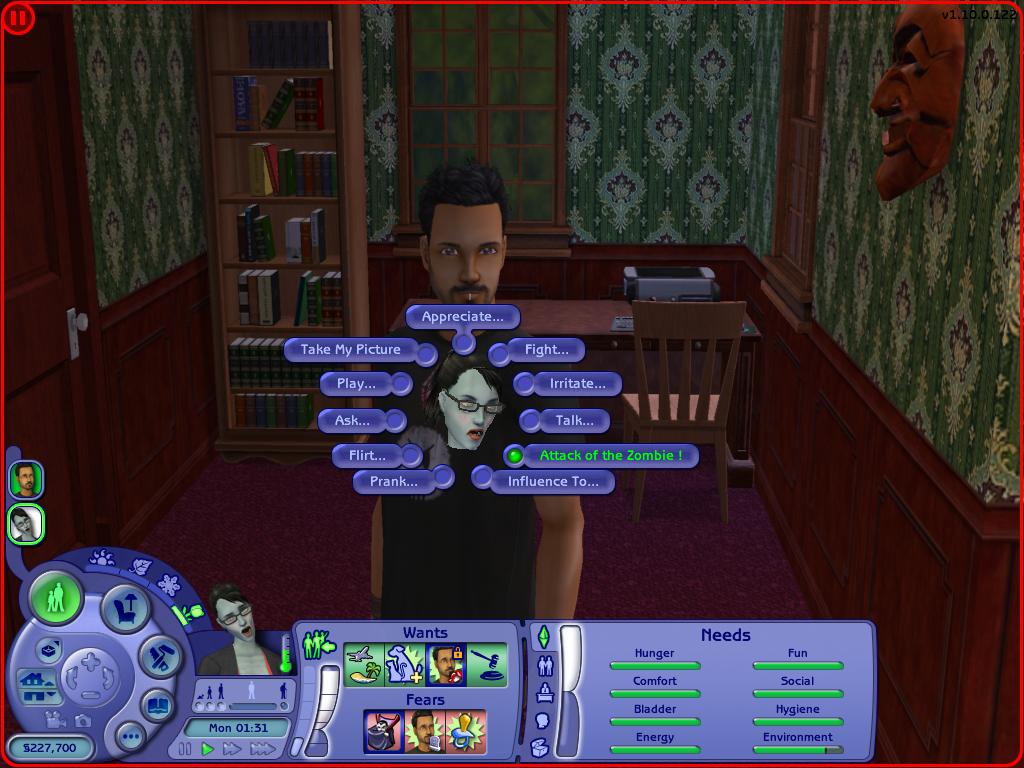 Created by [Black_Spirit] View Policy / About Me View Downloads Home

NB : With the normal version of this mod, any sim resurrecting become a member of your family. Moreover, Zombies attack sims only if they are hungry.

These mods allow zombies to attack living sims using a new interaction "Attack of the Zombie!". If a sim is attacked by a Zombie, that sim will get sick for hours or day until he dies. Then, they will resurrect as a Zombie !
The disease won't spread, the only way to get it is to be attacked by a zombie ( using my new interaction ).
Moreover, with these hacks, Sims who became Zombies because of the disease, or Zombies who attacked other sims ( using this new interaction ), will not die but will always ressurect. So the only way to get rid of these zombies is to kill them and then to delete the gravestone.

NB : I heard about a glitch causing the creation of a new interaction when deleting one of these mods.
Download the LBFRemovesocial file to delete this useless interaction.
( You can remove this file once the glitch corrected )

I used Smonaff mods to create this : I unfortunately couldn't get Smonaff permition to share this cause it's really been a long time since he last connected.
But he doesn't mention in his profil if it is forbidden or not to use his stuff to create new things ...
So I decided to share my mod anyway, hoping I won't have to remove it.
Thanks anyway to Smonaff for creating these mods which really helped me to create mine !

That's why these mods are NOT compatible with Smonaff resurrection potion
NB :I tried to change the GUIDS but it didn't work.

It is compatible with Smonaff's poison BUT you'll need to replace these files :
- "Smonaff_PoisonToken"
- "Smonaff_PoisonController"
by the modified version of them which are in this Zombie mod.