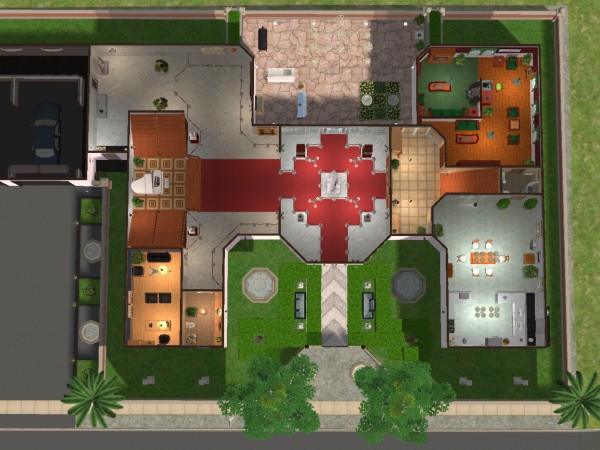 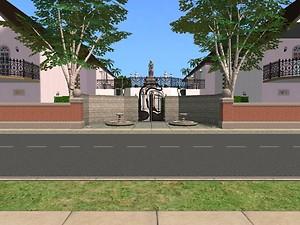 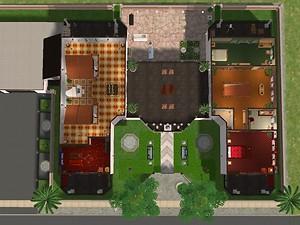 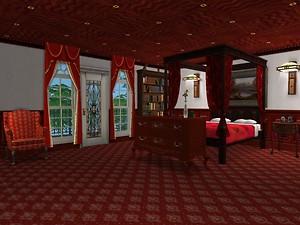 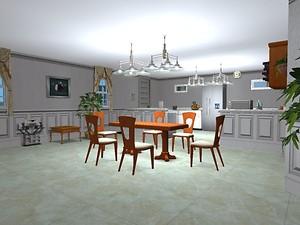 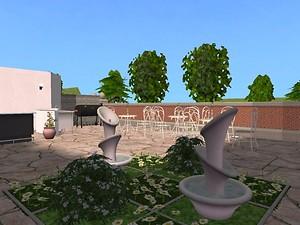 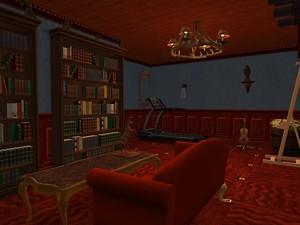 Since I couldn't find a good enough, proper looking house for my (female) Mayor Sim (who is married to the Education Minister...), I decided to build a Mayor's House. Basically there are two wings. One of them (right) being living space only, meaning where the family lives. It includes: A small vestibule (if that's a commonly used word); a rather large kitchen with a backdoor to the trashcan and the dining table; 2 bathrooms, one of them being more luxurious while the other is more basic; a living room; a walk-in-closet; 1 master bedroom with a balcony that overlooks the street (I imagined it to be for public appearances); another bedroom for a child or rather teenager with a balcony. In the middle there's an entrance hall with lots of decorations that leads to another large hall area with a grand piano on a foundation that serves for the stairs that lead onto the second floor. The whole hall area is kinda designed like a museum with those red band fences and some paintings. Also there is another backdoor with a chair and some magazines for the guard there...

All to the left is a garage with 2 car slots and a flat roof, being accessible through the left wing hall.

The entire left wing is kinda like a business or even public area. There's a luxurious bathroom (with some reading material...) and an office. Upstairs theres more hall-area, a study with books, fitness and creativity objects and 2 more balconies. In the middle there's another large balcony area that is, however, only decorated and connects the two wings on the second floor.

In the back there's a small "garden" area with a grill, a bar, some flower and small fountain decoration and lots of dining tables for BBQ with the political opposition... or something. Generally I put an emphasize on symetry. Not everything is symetrical but on the first glance it appears to be. The two wings are almost identical in size and roofing. Also I never wanted to make complicated exterior design as that isn't really my style nor my talent. You will still find plants, trees, bushes and flowers, etc, but not too many. I do believe, however, that my interior design is quite good, at least I believe I have my own style of having to overcrowd. (Sims can still access everything, though, except I missed something while having my mayor run around and sit down a lot.)


It's my first ever upload, though I did build lots of houses in the past. Never been much of an architect though. I'm more a furnishing guy.

Anyways, I hope you enjoy it! I paid a lot of attention to detail especially when furnishing and thinking of the separation between public and private I had in mind. Also, it is best placed in Pleasentview on the hill. Near the bridge and that gate thingy next to the satellite dish. If you have neighbors turned on and a far viewing distance, you can overlook the whole neighbourhood while your mayor stands on the balcony. :D