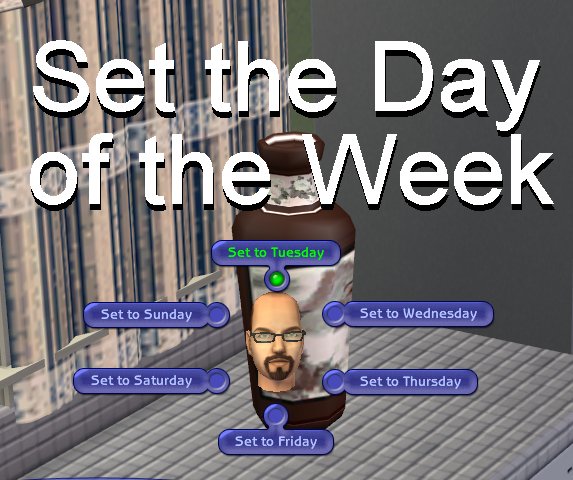 25,890 Downloads 1,210 Thanks  Thanks 154 Favourited 113,118 Views
Picked Upload!   This is a picked upload! It showcases some of the best talent and creativity available on MTS and in the community.

Cloned from the base game's 12th Century Song Dynasty Sculptured Vase, the operation is pretty straightforward. Simply choose one of the six days that it currently isn't. The day changes instantaneously.

Apologies to the many folks who downloaded a substandard mod.

So I just wanted to clarify what the problem was and alert people to be on the lookout for wonky long-term behavior. This info may also be of use to other modders.
The original upload did change the day as advertised, but at midnight, the game "remembered" the day before the change and rolled over to what would have been the next day originally (got all that?). Apparently, the insiminator has this same defect.
I didn't spot it in "testing" (I'm sorry, Numenor!) because I diddled with the days, checked carpool and whatnot, but then I set the day back to Monday. It rolled to Tuesday normally at midnight, which it would have no matter what day I had it set to!
Oops.

Fortunately, I'm almost as clever as I pretend to be and somehow was able to, in 3 hours, fix an issue that had eluded me for 6 months.
"Day of Week" is the lot global that this mod affects. Unfortunately, it is only affected for 1 day.
The proper (hopefully) version of the mod also alters the "Days Running" global. This is where the total number of days on the lot is stored (starting on a Monday, of course). By changing both, the day rolls over correctly from the changed value. Um, so far.
Keep in mind, in respect to Einstein (and to avoid negative values), this change only occurs forward. So if, upon moving to a lot on Monday, you set the day to Sunday, we are telling the game that you have been playing the lot for 6 days.
This may affect object price depreciation, but I'm not sure. You're cheating anyway, so that's a minor issue.

This will not affect your Sims' ages.
DOUBLE EDIT: Upon further testing, it seems it doesn't affect what day of the Season it is. I don't know. Please report. In any event, I recommend checking out the Season controller at Paladin's Place (whether you use my mod or not!)

So there you go.
Mea Culpa, but I hope I have set things right and finally delivered the awesome object that I originally intended.

Thanks to Kelleinna for pointing out the issue.
Additional Credits:
Thanks to Inge and Peter for continuing to make the improbable possible
Other Information