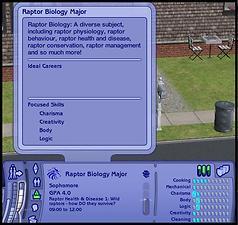 ScreenshotSophomore3.jpg - width=513 height=484
A screenshot of the details for the 3rd semester of my Raptor Biology major (Sophomore).

This is my Raptor Biology major. I didn't actually study this myself, as I didn't become interested in birds of prey until I was in the second year of my degree, but I kind of wish I had! It's a fascinating subject, and I'm sure your sims will agree! :-)

Use FrikaC's Majors Made Easier mod to assign this major to your student sims! (See linked thread for details/instuctions etc).

This major is cloned from the Drama major, but has a unique GUID, which is 0x00524331 - so no overwriting!
It also has its own icon, which has a transparent background in game. This is the same icon that I used for my Falconry career.

The focused skills are Charisma, Logic, Body & Creativity. Classes in all semesters start at 9am and last three hours (ie until noon).

Senior:
7. Raptor Management: Raising, feeding, training and breeding captive birds of prey.
8. Raptor Conservation: Save the birds! How to manage populations and educate the public.

This screenshot shows the details relating to the first semester of the Sophomore year (the 3rd semester overall). Normally the sim would've gained 1 Body and 1 Logic skill point in the first year, so they'd only need to gain one of each in this semester, but this sim started out studying a different major and hasn't gained those skill points. 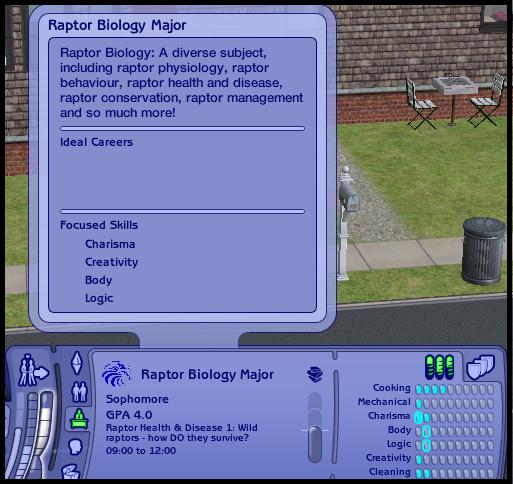 I hope you and your sims enjoy this major! :-)

Additional Credits:
Once again, lots and lots of thank yous to whiterider, for the awesome tutorial "Major Creation: The Definite Tutorial". It taught me everything I needed to know about creating majors! :-)

Also thanks to the makers of SimPE; where would we be without them?!

And thanks to FrikaC, whose "Majors Made Easier" mod sure did make majors easier! :-)