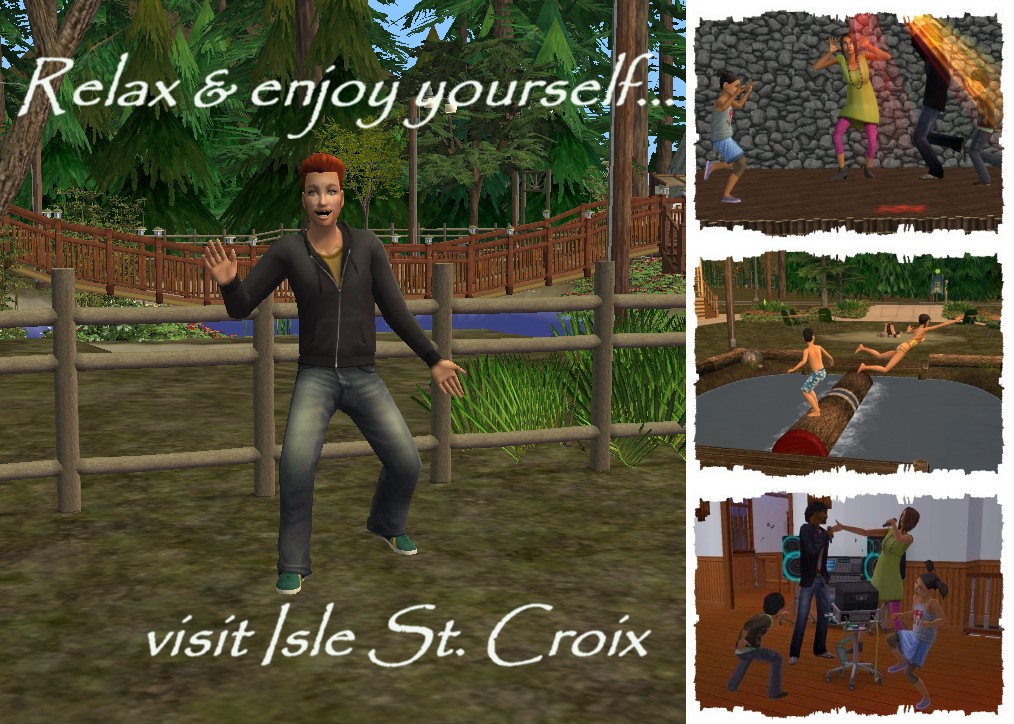 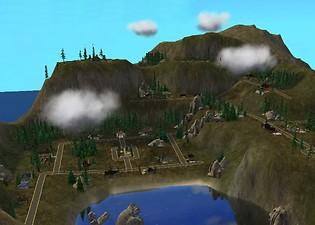 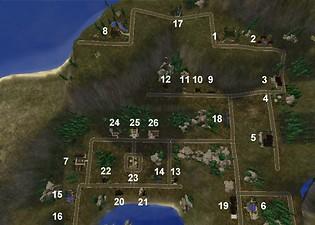 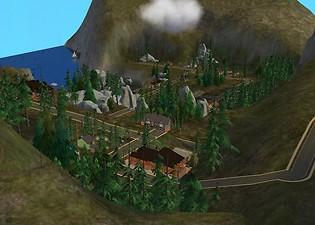 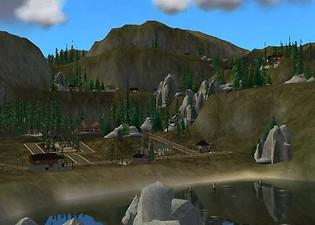 Isle St. Croix is a mountain destination Bon Voyage subhood, made using Numenor's AnyGameStarter in a University/Nightlife/Open for Business/Seasons and Bon Voyage set up, which means I've been able to include items from those EP's to make it (I hope) slightly more interesting than a purely BV hood might be. It therefore requires BV and should work as long as you have that installed; if you don't have one/some of the other EP's but still wish to try this out then you'll probably find items, walls or floors will be missing and would need to be replaced. And remember, features such as half walls or stages etc won't show up if the the EP they depend on is missing. Background Information
I named it after the SC4 file used, unoriginal I know, but just to point out that it doesn't represent the real place by that name! As soon as I saw this template in game, I wanted to fill it with trees and log cabins, have my sims trekking through pine needles and breathing in the fresh mountain air! The lots here range in size and price and they won't suit everyone, some are more elaborate while others are very basic. They are all 'live-able' as they are and as with any new 'hood, you will be able to make your mark on it and adjust or adapt things to your particular tastes. The terrain dips and drops, and the hills are often just behind roads and lot space, so I have adjusted the ground levels or buildings to suit the positions they occupy. There are only a few completely flat lots, on lots near mountains or on slopes you may have to twist and adjust the view to see your sims, if that sort of thing annoys you I guess this subhood isn't for you!
Or...just don't visit Highpoint Hotel which is the worst offender, hopefully the pictures shown here will allow you to decide!

The neighborhood is split into two sections, I've added a bridge but the smaller area would only be accessable with a camera hack. Because of this, I haven't placed any lots on that side. It has been tested to ensure the hotels work properly, that BV features happen as and when they should, that the right NPC's show up and that the secret vacation lot works.
Most lots will have lights hidden inside of the trees, so if a lot looks as if it has none, your sims shouldn't find they are thrown into absolute darkness when evening comes! I use snapobjectstogrid to place shrubs, rocks and plants; I also use a gardening hack from Simbology to avoid sims stomping in frustration at not being able to trim their gardens! If you don't use such a hack, delete the greenery or replace it with something you won't have to look after. There are plenty of trees and rocks as neighborhood deco as well, I realize people may not like all that I've used, but I've tried only to add what I thought looked OK for the mood of the district.

Some lots are based on pictures found on Google images, some were inspired by buildings from Architectural Houseplans, as far as the EP's used allowed. I chose them mainly for their external appearance or for what I felt I could adapt or would fit in the game, and none follow their interior plans. In the comments section below you'll be able to find clearer details on the houses, along with comparison images where applicable.

Isle St. Croix was originally part of a larger neighborhood project called Beacon Falls, and was available on an independant site. The hosting for that ran out in the summer of 2010, leaving dead links for anyone trying to download parts of it. Due to that happening, I was linked to this WCIF, where I saw Mootilda suggesting that Beacon Falls and its add-ons might be accepted here at MTS. I then started to read through the upload rules and saw that the other parts of the project were likely to be too big, also as they had been put together as a group effort, I knew I would be unable to get everyone's permission because many of the people involved are no longer active.
I am uploading Isle St. Croix here mainly due to Mootilda's comment, and with thanks to her Subhood Tutorial, the business district and two BV hoods have been fixed, I have taken over the Blog and have reuploaded all of the files. Everything else for the project is available again through the links in my signature.

I am able to share Isle St. Croix because I put it together, daisylee at TSR made the SC4 template but she has given permission for it to be uploaded here. As I understand it, it is an edited version of EA's Three Lakes and it has not been hosted at TSR, it was provided because daisylee was one of a group of forum members there working on other parts of the Beacon Falls project.

Other things to note:
The hotel room prices listed in the comments below have been taken from an all EP/SP test game, and may vary slightly depending on which EP's you have installed.
The bridges were made before ceilings were available in the game, leaving the default tiles on the underside of them looking a little 'odd' as they raise up or down. I haven't yet tried, but wondered if an invisible tile might work...in the test game, I just used the same tile as it had above so that it looked less obvious.
All lots have been weatherproofed by adding tiles under the roofspace.
If you've ever downloaded this subhood before, this version is safer than the old one, and all of the issues I've ever been made aware of with it have now been fixed.
This latest version contains a secret lot and once your sims have found the normal Hidden Burrow map, the secret lot for Isle St. Croix shows up in the menu as 'ISC Hidden Burrow', so that the map name still makes sense.
There are no playable sims included, and no custom locals or tourists. If you already have a vacation hood attached to your neighborhood then sims you already have should show up here as well.
I hope people might find a use for it!

Details & Instructions
To keep this subhood within MTS's size limit, I've used Mootilda's Lot Compressor
This won't affect your game; after you've gone into each lot the files will return to their normal size. The tool makes subhoods much easier to share. You will also need to have 7-Zip in order to unpack the file.

For your own benefit, you might want to back up your game before installing this subhood.

To install Isle St. Croix:
Extract the M409 folder from MTS Isle St. Croix.7z into your Program Files\EA GAMES\The Sims 2 Bon Voyage\TSData\Res\NeighborhoodTemplate.
*NOT* into your My Documents\EA Games folder.
This directory will also contain the three shipped bon voyage destinations under the names A001, M001, T001 and V001.

If you installed The Sims 2 Bon Voyage EP into an alternative location, extract M409 into that installation directory, under the subdirectory: TSData\Res\NeighborhoodTemplate.
To uninstall Isle St. Croix:
Delete the M409 folder from your Program Files\EA GAMES\The Sims 2 Bon Voyage\TSData\Res\NeighborhoodTemplate.
Please note that if Isle St. Croix has already been attached to any of your neighborhoods, then deleting it from the Program files will not take it from those neighborhoods, it will just delete it from the list of Bon Voyage destinations available in your menu.
To delete it from an actual neighborhood, you will need to use the trashcan icon found within the game.

Isle St. Croix will be available in the list of vacation destinations when you click to choose a holiday neighborhood, it is 'as well as' and not instead of any Bon Voyage neighborhood you currently play. These instructions are also included along with the download as a 'Read Me' file.

Recommended content:
Mootilda's Fix Subhood Selection mod, which allows extra subhoods to show up in the game menu.
Sophie-David "Fence Post Extenders" That Actually Fit offset columns. Especially to replace the ones in 1 Rockfall Lane, but other lots might benefit from them as well.
Sophie-David Economy Dishwasher with NPC Worker, Featuring Stealth Technology & Recolours, especially for the campsites.

Credits:
Credits and many thanks go to Mootilda for the advice given, for her Subood Tutorial, for the HoodReplace progam and the Lot Compressor.
Sophie-David Buyable Aspiration & Career Rewards for Lot Builders
To Numenor for AnyGameStarter, the creators of SimPE and Inge Jones.
To cwykes at MATY for sparking my interest in making custom default neighborhoods.
To J.M.Pescado for MATY and for all the advice I've found there, to SaraMK for the tutorials which allowed me to make the original version of this subhood, to Argon and Marvin Kosh from MATY for their mods and forum advice.

To daisylee at TSR for the SC4 template and for her help in testing the original version of this subhood, and for allowing it to be put up here. To Moza at TSR for hosting the Beacon Falls website for as long as she did and also for testing and all of her support. And to all other contributing members of the team over the years, many thanks for good times fondly remembered! Other neighborhood & lot information
You will be able to find more information on all of the lots in the comments below, they will be described in order, starting with hotels 1-7, then the houses 8-16, and finally the community lots 17-26 as indicated on the map above.

3. I have used 7-Zip, if you don't already have that then you will need to download it in order to unpack the file: http://www.7-zip.org/

To install Isle St. Croix
Extract the M409 folder from MTS Isle St. Croix.7z into your Program Files\EA GAMES\The Sims 2 Bon Voyage\TSData\Res\NeighborhoodTemplate.
*NOT* into your My Documents\EA Games folder.
This directory will also contain the three shipped bon voyage destinations under the names A001, M001, T001 and V001.

If you installed The Sims 2 Bon Voyage EP into an alternative location, extract M409 into that installation directory, under the subdirectory: TSData\Res\NeighborhoodTemplate.

3. I have used 7-Zip, if you don't already have that then you will need to download it in order to unpack the file: http://www.7-zip.org/

To install Isle St. Croix
Extract the M409 folder from MTS Isle St. Croix.7z into your Program Files\EA GAMES\The Sims 2 Bon Voyage\TSData\Res\NeighborhoodTemplate.
*NOT* into your My Documents\EA Games folder.
This directory will also contain the three shipped bon voyage destinations under the names A001, M001, T001 and V001.

If you installed The Sims 2 Bon Voyage EP into an alternative location, extract M409 into that installation directory, under the subdirectory: TSData\Res\NeighborhoodTemplate.