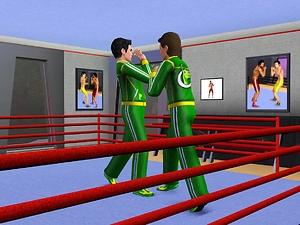 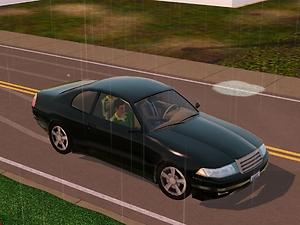 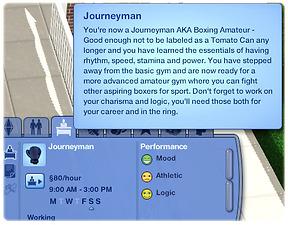 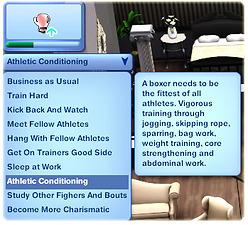 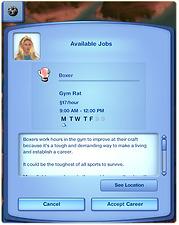 375 Thanks  Thanks     132 Favourited
This download is a custom career. This means that you will need the NRaas Careers mod installed in order to use the download in your game.
This is the first mod/career mod that I've ever worked on... and won't be my last!

In order for this custom career mod to work, you MUST have Twallan's NRAAS Careers Mod installed correctly (matched to your game patch).

This was made with patch 1.63, but it should work on the majority of the earlier patches - please let me know if it does not. EP compatible and it should work on base game or any combination of EPs as long as the careers mod mentioned above is installed correctly.

The career is currently in English and those languages under Updates above. Language strings have been provided if anyone would like to translate it into other languages (only translate the text between the <STR></STR> tags, leave everything else the same), just PM if you have done so and I'll give you my email address so you can send me the file and I can add it.

There are two flavors for download (the difference is pay rates, look under "Career Levels" further down in the post for more details. ONLY install one of them, don't install both.

Rabbithole: Stadium
Levels: 10
Age: YA,A,E
Skill Building: Athletic, Logic, Charisma
Uniforms: I used the following game career outfits for males and females (not including elders) - sweats, athletic, athletic jacket. I'm not sure how to incorporate custom uniforms or I would have tried to put in the boxing outfit, so if, or until, I figure it out, those will have to do. Alternately, you can change the career outfit via CAS or style booth once your sim has joined the career.
Opportunities*: 5 included
Career Events/Chance Cards*: 5 included
Autographs: Ability to hold autograph sessions at the Stadium will be enabled once level 5 has been reached. The interaction will be available by clicking on the stadium.

*There is a possibility that the opportunities and events may repeat, some are set to trigger only on certain levels, but all are set at a likelihood of 1. An example has been provided in the screenshots.

Boxers work hours in the gym to improve their craft because it's a tough and demanding way to make a living and establish a career.

It could be the toughest of all sports to survive.

Many fighters are drawn to the sport because they love the one-on-one competition and may have seen their heroes emerge victorious in a big fight and they want to emulate that success.

Having that desire is a small part of being successful. You need to have athletic ability and the determination to turn that into fighting skill.

It takes hours in the gym and years to develop the specific characteristics needed to be a great boxer. Do you have what it takes?

Level 1: Gym Rat
You're a die-hard gym rat and for some time now have been admiring the local boxers for their athleticism, the way they move, the logic they must possess to out-maneuver their opponents, and that exciting rich and famous life they can have. You're tired of watching and you want to - NEED to - be a part of that life-style.

As a boxing club member, you will begin to understand the meaning of determination. You will be under a boxing trainer and must do what you are told. It doesn't matter if the trainer wants you to make him a protein shake or do some heavy lifting, at the end of this level you will have had 5 to 10 fights under your belt - just the beginning of your career.

Level 2: Tomato Can
You are a basic boxing trainee - Not yet a contender, not yet taking it as serious as you need to be. The training is more rigorous than it was, however, you are still chum for beginning professionals. Right now you are treating boxing as just a part time gig, it's time to get serious.

Level 3: Young Prospect
Past the beginning stage of your career, ready for the next step. You thought things were tough before? Heh, just wait until this next level knocks you to the ground. After learning the basics of boxing, you have to now sacrifice your favorite foods and you will really need to work on enhancing your body skill and maintaining stamina. You will have to make sure that you get plenty of rest and work on toning that body of yours into a power machine.

Level 4: Journeyman
You're now a Journeyman AKA Boxing Amateur - Good enough not to be labeled as a Tomato Can any longer and you have learned the essentials of having rhythm, speed, stamina and power. You have stepped away from the basic gym and are now ready for a more advanced amateur gym where you can fight other aspiring boxers for sport. Don't forget to work on your charisma and logic, you'll need those both for your career and in the ring.

Level 5: Upstart
You have made an exit on your less than humble days... hopefully. You are beginning to learn the value of a good reputation and are showing more pride in the ring. With a professional career on the near horizon, you are on the look out for a manager.

Level 6: Brawler or Mauler
Whatever your newfound style of boxing is, you have gained arrogance as well as confidence. You can go head-to-head and toe-to-toe, rolling with the punches with other aspiring fighters, pound-for-pound, for cash and prizes.

Level 7: Contender
Ready for a title shot, a shot at the championships? You have gained popularity, moderate fame, and respect within your hometown, and the media is buzzing with your name. Save those news story clippings for your scrapbook, so you can show it off to your friends, family and future grandchildren.

Level 8: Belt Holder & Champion
You are now a well known and highly esteemed boxer at the national level. You are at the point in your career where you gain access to professional bouts and outstanding after-parties. There may be a chance that you will stumble on a worthy manager or a manager who thinks you are worthy. However, don't stumble in the wrong direction, make your life choices wisely or you may find yourself pan handling for loose change on the streets.

Level 9: Boxing Champion
You have obtained an Elite Fighter Status - This level is what differentiates a true champion with a belt to a ordinary fighter who happens to have a belt. You don't have to own a belt to be considered elite.

Everything seems to be going well. You have gained popularity and can actually look on with pride at all the trophies and belts that you have earned. You will be working longer hours at this point in your career, but you can handle it because you're ambitious and want the world title and belt too.

Level 10: Super Star & Legend
World Champion. A world champion is not only an excellent fighter in the ring and the best boxer in his/her division; this boxer is also a lady or gentleman who has won this title cleanly and fairly, and is willing and ready at all times to defend it against any qualified opponent.

A world champion is a true example to the youth of the world, in and out of the ring. The champion is always committed to respect, support, and comply with the Boxing Constitution and its Rules and Regulations, and always carries the representation and world championship with sportsmanship, dignity, loyalty, and pride.

This is a level above elite. You have transcended the sport, become a legend to the fans and media, have a manager, and you have finally made it to the top. You may very well go down in the boxing history books, but in order to stay at the top you have to keep fighting the competition. You are not ready to retire yet, are you?

Career Levels
There are 2 versions available for download, difference being pay rates.
Additional Credits:
S3PE
Twallan's Careers Mod and various tools
Creon for the Complete Guide to Career Modding for Beginners! Tutorial via Sims Wiki
AriesFlare's TS2 The Boxing Career, the inspiration for this TS3 career (though the majority has been revamped/rewritten, some text from the titles/descriptions may still be the same)

If you need more info, see:
Back to download view
38 Comments / Replies (Who?)