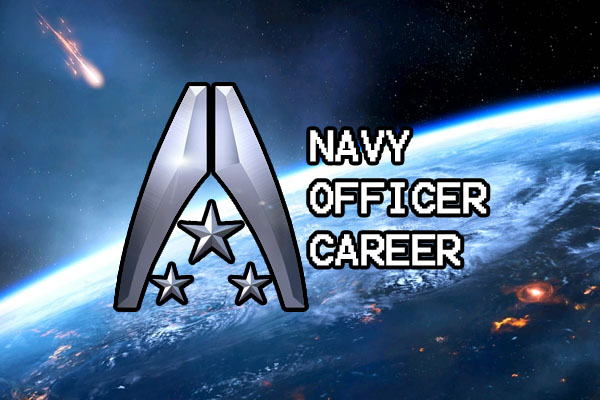 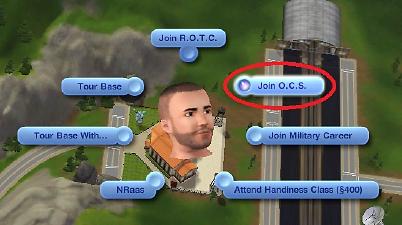 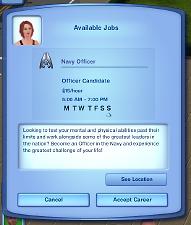 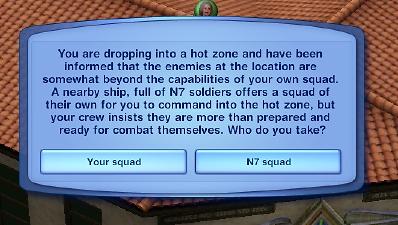 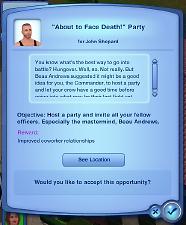 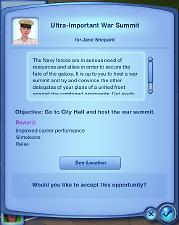 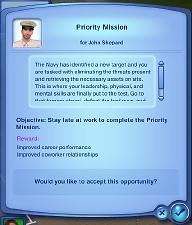 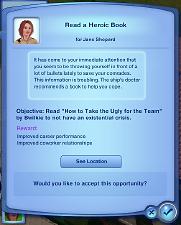 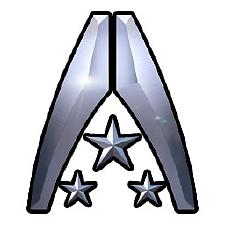 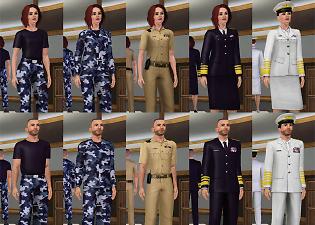 303 Thanks  Thanks     97 Favourited
This download is a custom career. This means that you will need the NRaas Careers mod installed in order to use the download in your game. 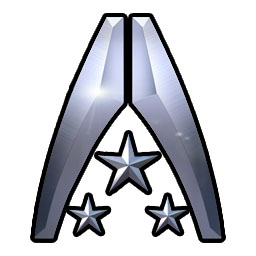 The Navy Officer Career! (With a ridiculous amount of unnecessary Mass Effect references.)

I replayed all Mass Effect games in a week and then redirected my raging fangirling to create a career inspired by my all-time favorite, mflaha55's Army Officer Career. This is the result... Hope you like it?

The career relies on the Martial Arts skill from World Adventures, uses reward objects from Ambitions, and borrows a lot of moodlets from Late Night.

The career was created using patch V1.63 and does not overwrite any other career or game file.

The career is available in English and Spanish (thanks to argos93).

The Navy Specifics and Ramblings

Also, in true Sims 3 fashion, level descriptions are vague and open-ended. Not everyone wishes to play a strict and rigid military career or a career based on a game they've never played, so I left out any deep Navy specifics or Mass Effect references from the descriptions. Career opportunities are also ridiculous and extremely improbable. (They may or may not be funny. I tried.)

Fair warning, this is my first custom anything ever created, so if there's room for any improvement please let me know. 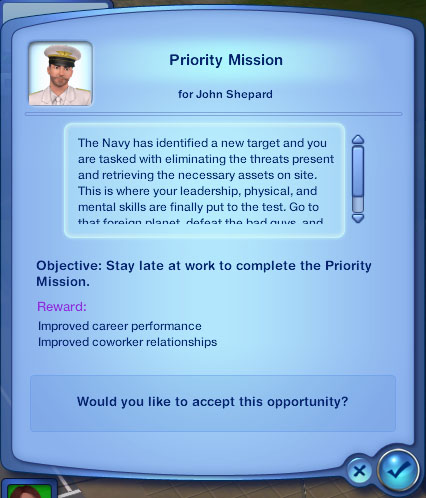 This career includes 40 career events. 28 of them are opportunities, and the last 12 are the randomly-triggered events that occur while at work.
The career also includes custom outfits based on the default military and police uniforms, as well as some base game shoes and the officer's hat. Some of these outfits were re-textured to include proper Navy insignia at each career level. I removed the cord from the police uniform, which required the modifying the normal, so the mesh information also had to be copied. These modified files are included in the career file. 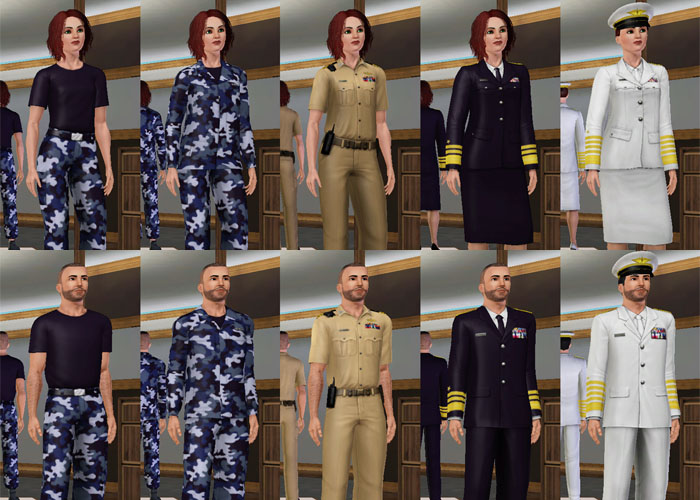 If you do not want custom outfits for whatever reason, simply delete all _IMG, BBLN, CASP, GEOM, VPXY, and SIMO files from the .package.

The career works out of the default Military Base rabbit hole, and can be joined with the "Join O.C.S." interaction. 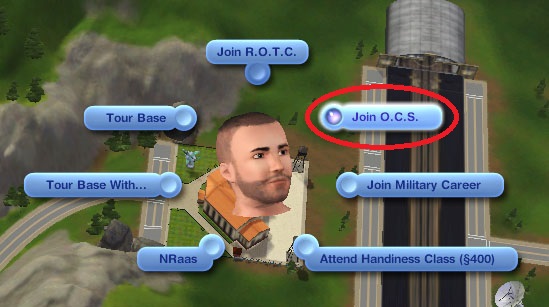 The join career text:
Looking to test your mental and physical abilities past their limits and work alongside some of the greatest leaders in the nation? Become an Officer in the Navy and experience the greatest challenge of your life!


01 - Officer Candidate
The next four months of Officer Candidate School will put you through the ultimate physical, emotional, and mental test of your entire life. Work hard, train hard, stay loyal to your convictions and graduation may not be that far off. The life of a Navy Officer awaits!

02 - Ensign
Fresh out of Officer Candidate School and into a commissioned position. Congratulations, Ensign! Keep working hard on your form and training, and pay attention to your new commanding officers to master all your new responsibilities as a Navy Officer.

03 - Lieutenant
Some silver bars on your shoulders and you finally have some respect and credibility from those around you. Demonstrate your capabilities and prove worthy of your new position and your superiors might start taking notice.

04 - Lieutenant Commander
Congratulations, Lieutenant Commander! The Navy has definitely seen some promising qualities in your performance and made you Executive Officer of your own ship. Get to know your Commanding Officer and learn as much as you can about the barrage of new responsibilities you now have aboard a Navy vessel.

05 - Commander
Your old Commanding Officer is being promoted, and you have been asked to take over the ship and the position. The responsibilities keep coming, and the pressure keeps mounting, so make sure to keep your head in the game, Commander!

06 - Captain
Your impeccable performance has definitely been noticed, and the Admirals higher up the brass have named you commanding officer of your own squadron. Keep a sharp eye and a strong jab, or you might endanger the men and women now under your command.

07 - Rear Admiral
You are now a proud member of the flag ranks! The pay has increased, the men and women under your command have multiplied, and the responsibilities are piling up. Keep your focus and continue to lead diligently and you might climb the ladder even higher!

08 - Vice Admiral
The president herself has nominated you for appointment to a Vice Admiral position. Your skills and leadership are needed, Vice Admiral {0.SimLastName}. Make sure to bring your best and perform at nothing short of excellent to get the mission done right.

09 - Admiral
Congratulations, Admiral! You have achieved the four-star insignia and highest peacetime rank in the Navy. You are among the elite in the Navy, your face is plastered on recruitment posters everywhere in the country. Accept the thanks of a grateful nation!

10 - Fleet Admiral
The nation is in need of an elusive five-star flag officer and calls for the obvious candidate to this paramount position. Your name is synonymous with the tales of legends and great battles, {0.SimFirstName}. Thousands of men and women are ready to follow your command without hesitation. Lead the charge and make your nation proud, Fleet Admiral {0.SimLastName}!

There are two versions of the career available.Both contain the same content except for the work hours.

The career is based on the Athletic, Martial Arts, Logic, and Charisma skills. Good relationships with the boss or coworkers are only necessary in the first seven levels.

There are three separate files available to download:
Additional Credits: CTU Team: for CTU .
Inge and Peter L Jones: for S3PE and S3OC .
Twallan: for the Careers mod, his custom career tutorial , his list of BuffNames , and the ErrorTrap mod.
mflaha55: for the Army Officer career.
CmarNYC: for SimOutfitter .
daluved1: for the various CTU tutorials .
Bioware: for Mass Effect.
The creators of Photoshop.

If you need more info, see:
Back to download view
39 Comments / Replies (Who?)